The former prime minister was reportedly paid $1 million per year - for just 25 days of work. 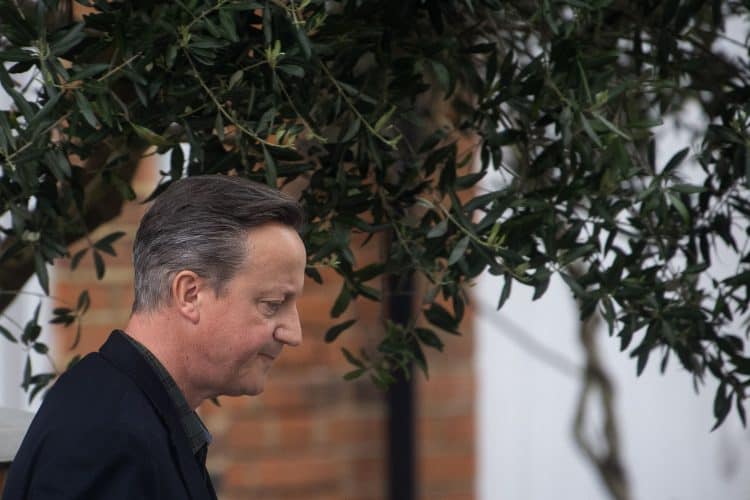 David Cameron was handed a salary of more than $1 million by Greensill Capital, the controversial finance company whose collapse uncovered the former prime minister’s lobbying scandal.

According to the Financial Times, Cameron received the large annual pay packet for his part-time advisory role, which included his frantic efforts to secure government bailout funds for the flailing company.

Two people familiar with the affair told the FT that Cameron was contracted to work 25 days a year as an adviser to the board – meaning he was earning the equivalent of more than $40,000 a day.

Appearing before MPs investigating the Greensill scandal in May, Cameron admitted that he had been paid “a generous amount – far more than what I earned [£150,000] as prime minister”. But he refused to disclose the exact figure, describing it as a “private matter”.

When the Covid-19 pandemic gripped Britain last year, Cameron lobbied a number of ministers and senior civil servants on 56 separate occasions in an effort to secure Greensill’s access to two of the government’s emergency lending schemes.

The former prime minister, who stepped down after the Brexit vote in 2016, insisted to MPs that his lobbying was not motivated by personal gain – but because Greensill “had a really good idea for how to help extend credit to thousands of businesses”.

Greensill eventually won access to a coronavirus lending scheme for large businesses – and extended its full £400 million allowance to companies linked to Sanjeev Gupta, the metals magnate who is now under investigation by the Serious Fraud Office.

David Cameron's salary in return for lobbying Tory Ministers to help his dodgy mate Lex Greensill to get access to taxpayers' money: £29,000 a day.

Cameron’s huge salary reportedly made him one of the top earners at Greensill – more even than the head of the company’s American division, who was earning just over $400,000 annually.

Earlier this week it emerged that the Treasury wiped all data from more than 100 Government-issued mobile phones last year because their users, including the department’s boss, entered the wrong Pin code.

With each reset, texts sent from those phones are likely to have been lost. This includes messages sent by Tom Scholar, the department’s permanent secretary, which MPs have said should be released.

Earlier this year, Scholar was asked to disclose the communications he had with former prime minister and lobbyist David Cameron.

Questions were raised about what was said between Cameron and officials, and what – if anything – he had been promised.

But Scholar said he was unable to tell MPs what his texts to Cameron said because they had been wiped from his mobile phone.

“At the beginning of June last year, (the phone) had to be reset because, under government security as applies to mobile phones, if the password is incorrectly entered more than a few times, the phone is locked, and the only way to unlock it is to reset it,” he said.

He added: “Resetting it means that the data on it is lost. I knew that when it happened last June, and I am certainly not the only person to whom that has happened.”