The retired teacher was filmed scrawling the words, “Brexit is based on lies. Reject it” on the wall of a school playing field. 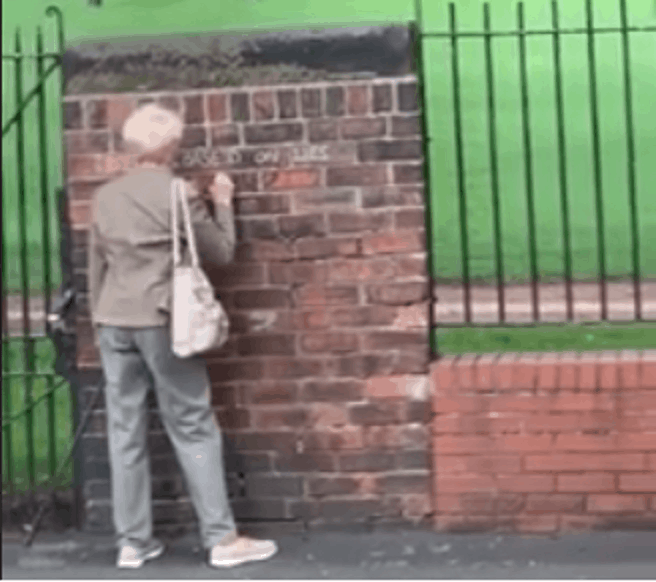 A pensioner dubbed the “graffiti grandma” has gone viral on social media after using chalk to scrawl anti-Brexit slogans on a wall.

Hazel Jones, 71, was revealed to be the person behind a series of slogans that were etched into walls and fences across Wakefield, West Yorkshire.

The retired teacher was filmed scrawling the words, “Brexit is based on lies. Reject it” on the wall of a school playing field.

In the footage, she puts the chalk back in her pocket before leaving the scene using her walking stick.

Carla Petts, who posted the footage on Facebook, wrote: “Keep seeing this message appear on this wall. Thought it must be some youths writing it. Today I spotted the culprit. What a woman!”

Ms Jones later told The Times: “Had I known I was being filmed I would have dressed up a bit more.”

She went on to say that her generation has “fouled up the prospects of younger people”, saying she is doing it “for her grandchildren”.

“My children are worried there may be reprisals but it really never occurred to me that it was an offence. It’s just chalk after all,” she added, before saying:

“But if the government chooses to deliberately impose on its own population food shortages, job losses and disruption of medical supplies, they really need not fear old ladies pointing this out.”