Britain's furlough scheme is being wound down in October, potentially throwing millions out of work. 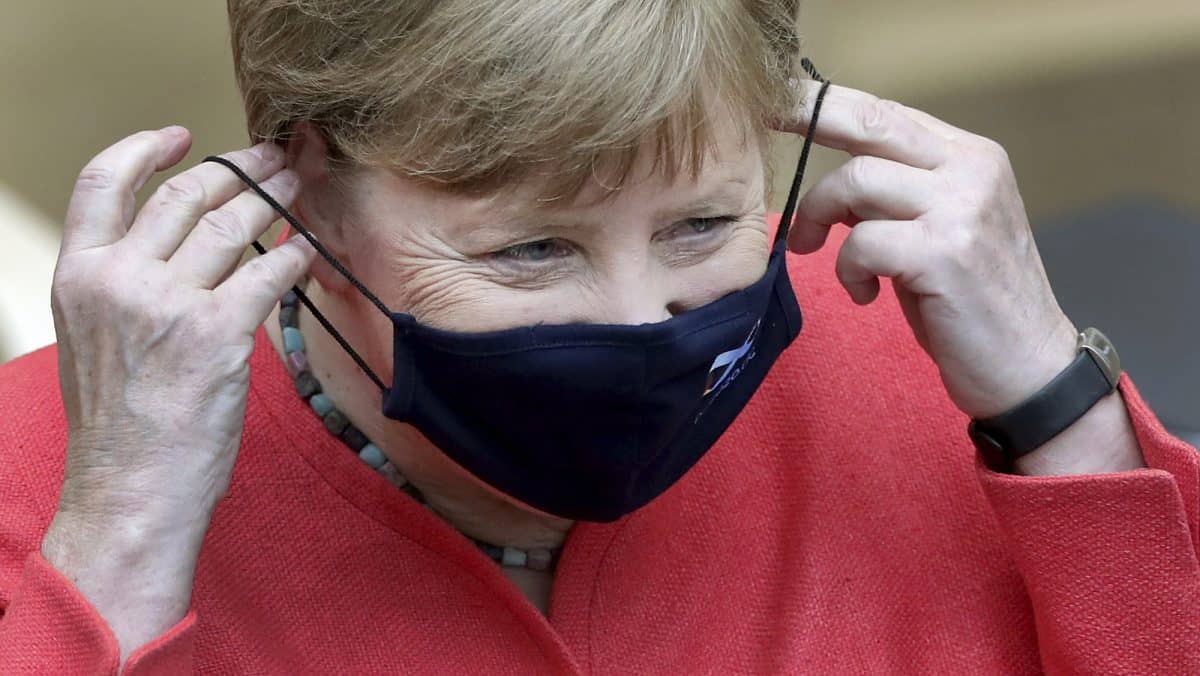 German Chancellor Angela Merkel adjusts her face mask as she arrives for a meeting of the upper house of the German legislative in Berlin, Germany, Friday, July 3, 2020. (AP Photo/Michael Sohn)

Germany will extend its furlough scheme by another year, as Rishi Sunak prepares to wind down the UK’s equivalent programme – likely causing millions of Brits to lose their jobs.

Angela Merkel suggested that she would allow the Kurzarbeit scheme, which had been limited to claims lasting a maximum of 12 months. Unlike Britain’s furlough system, Germany has slowed firms to put their staff on part-time work to reduce costs.

Employers in the UK have had to start contributing towards the salaries of their furloughed workers from August – first with pension and national insurance contributions, then with 10 per cent and 20 per cent in the next two months.

One-in-eight workers are still on the scheme, the Office for National Statistics (ONS) revealed this morning. Its latest survey found that 12 per cent of the workforce is still furloughed, leading to fears that the UK is on the cusp of a catastrophic jobs crisis.

Germany’s finance minister, Olaf Scholz, first proposed extending the benefit programme over the weekend. “The corona crisis won’t suddenly disappear in the next few weeks,” Scholz, who will be the Social Democrats’ candidate for chancellor in next year’s elections.

“Businesses and employees need a clear signal from the government – we’ve got your back for the long haul in this crisis, so that no one is being let go without need,” he added.

Kurzarbeit – meaning ‘short work’ – is modelled on a programme that won Germany praise during the financial crisis. It takes the form of an unemployment benefit that is paid out to companies by Berlin’s Federal Employment Agency, which compensates lost earning for workers placed on reduced hours.

About 5.6 million employees in Germany were still on the scheme in July – which has experienced particular take-up in the manufacturing and retail sectors.

Rishi Sunak, the chancellor, said that the decision to wind down the furlough scheme in Britain was “one of the most difficult decisions” he had made – but claimed it was unsustainable to continue it, adding that most other countries were winding down their schemes.

The total cost of Britain’s furlough scheme is nearly £35 billion.