There’s no reason why anyone with a sane mind could see that amount of force that was used.” 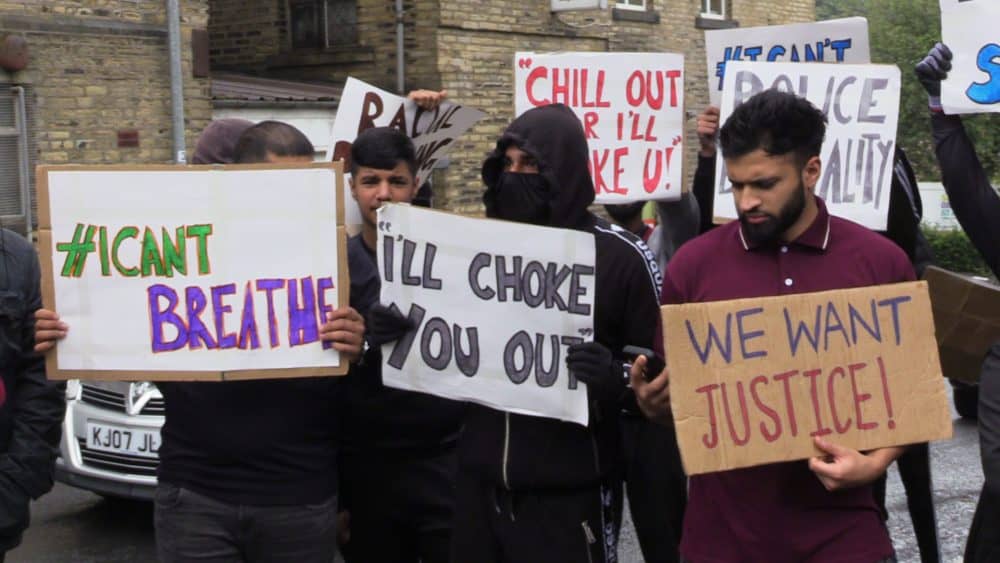 People with placards, gathered for a demonstration outside Halifax police station on Wednesday afternoon. A West Yorkshire officer has been suspended after a video was widely shared of Hassan Ahmed, 27, being arrested in Halifax on Sunday. Safyah is Hassan Ahmed's sister.Credit;PA

A woman has said she was sickened by footage of her brother being arrested while being told “chill out or I’ll choke you out” by a police officer.

A West Yorkshire officer has been suspended after a video was widely shared of Hassan Ahmed, 27, being arrested in Halifax on Sunday.

His sister Safyah, who did not wish to give her surname, joined around 100 people for a demonstration outside Halifax police station on Wednesday afternoon.

She said of her brother’s arrest: “It was a total abuse of power. I felt sickened when I watched the video of my brother and hearing him struggling to breath under the choke-hold of that police officer.

“Seeing that police officer punching him in the face while he was lying down on the floor… and, just minutes before that, seeing my brother have both his arms in the air, physically telling the officers that he was surrendering.

“And the fact that he was choked after that. There’s no reason why anyone with a sane mind could see that amount of force that was used.”

Safyah said her brother was “shaken” by the manner of his arrest and said of the video: “It’s still distressing for me and my family members to see.”

Asked if Mr Ahmed had resisted arrest, his sister said: “Anyone can see from the video that, before he was choked, before he was punched in the face, he had both his arms up, he said verbally ‘I give up’ repeatedly, so I don’t think that constitutes resisting arrest.

She said her family had also asked the police to release the officers’ body-worn camera footage.

Safyah thanked those who turned out for the protest in the pouring rain in Halifax: “It’s obviously struck a chord with everyone from every background.”

She did not want to discuss why the police were called but added her brother is “a family man, he’s a brother, he’s a husband, he’s a son.”

West Yorkshire Police said on Tuesday that the matter has been referred to the police watchdog after the footage was reviewed “as a matter of urgency”.

The 45-second clip shows two male uniformed officers grappling on a pavement with a man wearing shorts and a T-shirt.

The officers manage to get the man onto his front and one tries to handcuff him as the other appears to be talking on his radio.

Temporary Assistant Chief Constable Osman Khan said on Tuesday: “We are aware of a video circulating showing the arrest of a man at Spring Hall Gardens, Halifax, on Sunday August 16 in relation to assault offences.

“We immediately reviewed the footage and looked into it as a matter of urgency to establish the full circumstances.

“We have reviewed the actions of the officers involved and a referral has been made to the force’s professional standards directorate.

“Our investigation remains ongoing and we have made a voluntarily referral to the Independent Office of Police Conduct (IOPC). The officer involved has been removed from front line operational duties.

“The man arrested was released under investigation.”

The force said later that the officer had been “suspended from the force”.