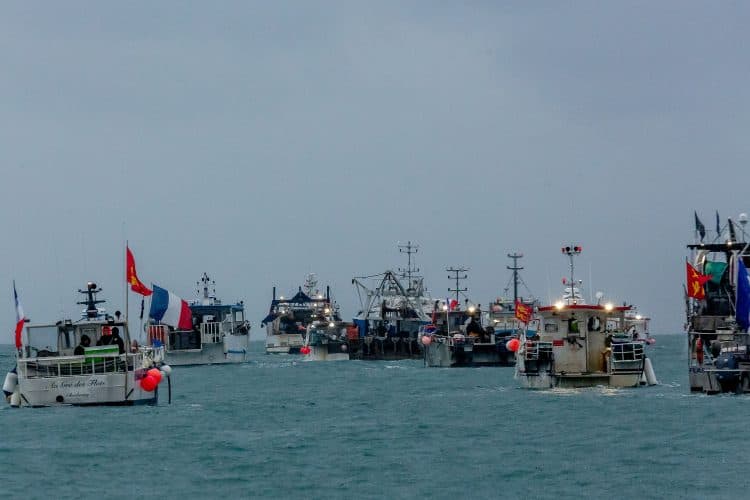 Emmanuel Macron has reportedly lost patience with Boris Johnson – and is considering ratcheting up pressure on the prime minister to force him to comply with Britain’s post-Brexit obligations to the EU.

French fishermen yesterday threatened to blockade Calais in the run-up to Christmas – while Clément Beaune, France’s Europe minister, warned Paris could cut energy supplies to the UK and Channel Islands that rely on imported French electricity.

Macron’s government has accused the UK of flouting Brexit accords on fishing after Johnson refused permits to most smaller fishing craft that applied for access to Britain’s six to 12-mile offshore zone.

The UK has granted fishing rights to just 12 of 47 small vessels in UK waters since Brexit.

Action being considered by French fleets could include blocking the Channel Tunnel and the Calais ferry port – preventing billions of bounds of imports from reaching shelves as Britain continues to be battered by a supply chain crisis.

Boulogne skipper Luc Ramet said “if nothing is done in 15 days”, he and fellow fishermen stand ready to “take direct action” to blockade Britain.

“As far as French fishermen in northern France are concerned, in the absence of any results, the blocking of the port of Calais and exports to the United Kingdom for the period leading up to Christmas is an option,” said Olivier Lepretre, president of the powerful fishing committee for the northern Hauts-de-France region.

His threat came a week after he held talks with French maritime minister Annick Girardin, who has asked the European Commission for possible retaliatory measures.

Girardin met virtually with France’s Europe minister Clement Beaune and MEPs Pierre Karleskind and Nathalie Loiseau to “defend the rights of our fishermen”, according to a Wednesday tweet by Loiseau.

“They don’t have to pay the price for #Brexit,” she posted, pledging “calmness, firmness and determination”.

A day earlier, Beaune said France would “take European or national measures to exert pressure on the UK”, and hinted that Britain’s imported energy supply could be disrupted in retaliation for a lack of access to UK waters.

The UK’s Brexit minister, Lord Frost, said it was “unreasonable” to suggest the UK was acting in bad faith when it came to allocating post-Brexit fishing licences to French boats, accusing France of being disingenuous over the UK’s position on fishing access.

“We have been extremely generous and the French, focusing in on a small category of boats and claiming we have behaved unreasonably, I think is not really a fair reflection of the efforts we have made,” he told a Conservative Party conference fringe event on Tuesday.

“The government has this year issued a large number of licences to EU vessels seeking to fish in our exclusive economic zone (12-200 nautical mile zone) and our territorial sea (six-12 nautical mile zone),” a UK Government spokesman told the PA news agency.

The spokesman added that the approach had been “fully in line” with the UK’s commitments in the Trade and Co-operation Agreement (TCA) agreed as part of the Brexit divorce deal.

Deputy Prime Minister Dominic Raab said the UK will be “calm but resolute” in the row.

“Of course, what the French need to adjust to is the new reality as we have left the EU, we have got a free trade deal – it includes scope on fishing but they can’t expect to have the kind of quotas they had previously, unlimited access,” he told TalkRadio on Wednesday.

The cross-Channel tensions over fishing have been long-running, with earlier rows leading to Navy ships being scrambled to Jersey amid concerns of a blockade of the island.

It is also not the first time the French have used the energy supply threat to try to gain ground in the Brexit row.

In May, Girardin warned that France was ready to take “retaliatory measures” after accusing Jersey of dragging its feet over the issuing of licences to French boats under the terms of the UK’s post-Brexit trade deal.

Jersey gets 95 per cent of its electricity supply from France, with just under half of the UK’s electricity imports, as of 2020, coming from the same source.