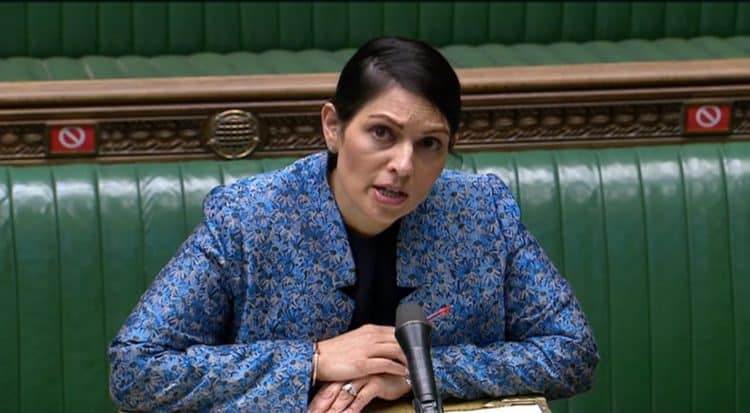 France has accused Priti Patel of “financial blackmail” amid a cross-Channel row over migrant crossings.

The pair met in London yesterday for what Paris described as “very tense” talks, over British demands for French police to stop more boats.

According to reports, Priti Patel has ordered officials to rewrite maritime laws to allow Border Force to turn boats around, forcing them to be dealt with by French authorities.

It comes just days after Patel is said to have told MPs she is prepared to withhold millions of pounds of cash promised to France to help step up patrols unless an improvement in the number of migrants intercepted by French authorities is seen.

“France will not accept any practices that are contrary to maritime law, nor any financial blackmail,” Darminin tweeted. “The British commitment must be respected. I said it very clearly to my counterpart.”

Whately told Sky News that migrants on those routes were “desperate” but she added that the journey was dangerous.

She said: “So we want to deter people from embarking on that kind of dangerous journey.”

Asked repeatedly whether the government was looking to turn boats around, she said: “The government looks at all the options, but a really important thing, of course, is you wouldn’t want to put people in any greater danger, they’re taking a dangerous journey as it is, and what we want to do is actually deter them from starting that journey in the first place.”

On Wednesday, Boris Johnson said efforts to stop the crossings depended “to a large extent” on the ability of the French authorities.

Earlier this year, the UK and France announced an agreement to more than double the number of police patrolling French beaches.

It was the second pledge of its kind in a year, in a bid to stop small boats from leaving France.

As part of the deal, the government pledged to give France £54 million to support its efforts to stop small boat crossings.

Charities urged the Home Office to take a “more humane and responsible approach” towards asylum seekers and said humanitarian visas were needed to help “prevent the chaos of the Channel crossings”.

At least 14,100 people have now crossed to the UK aboard small boats this year, data compiled by PA news agency shows.