The dead included a woman who was shot by US Capitol Police as well as three others who died in “medical emergencies”. 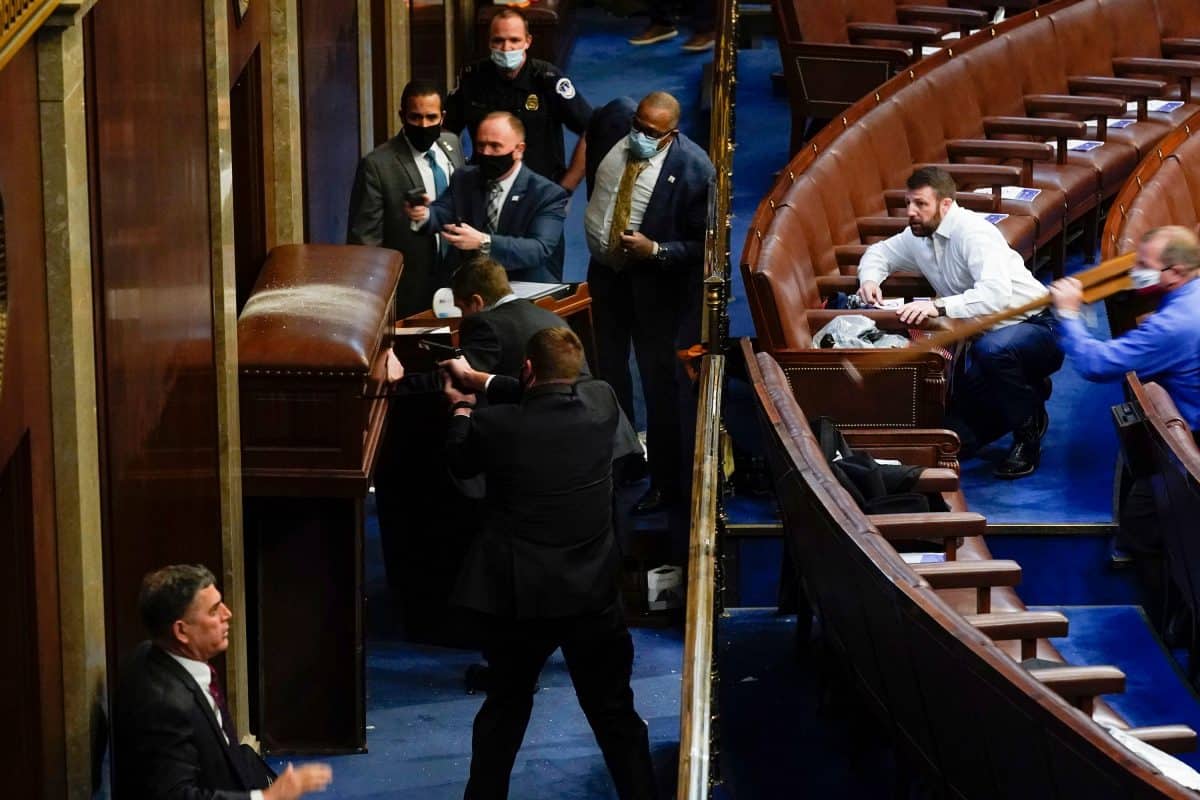 Angry supporters of President Donald Trump have stormed the US Capitol in a chaotic protest aimed at thwarting a peaceful transfer of power.

The attack, which left four people dead, forced politicians to rush from the building and interrupted challenges to Joe Biden’s Electoral College victory.

President Trump issued a restrained call for peace well after the protests was under way but did not urge supporters to disperse. Earlier he had seemingly egged them on to march to Capitol Hill.

Wednesday’s ordinarily mundane procedure of Congress certifying a new president was always going to be extraordinary, with Republican supporters of Mr Trump vowing to protest over the results of an election that they have baselessly insisted was reversed by fraud.

But even the unusual deliberations, which included the Republican vice president and Senate majority leader defying Mr Trump’s demands, were quickly overtaken.

In a raucous, out-of-control scene, protesters fought past police and breached the building, shouting and waving Trump and American flags as they marched through the halls.

Police said four people died in the protests. Washington DC police chief Robert Contee said the dead included a woman who was shot by US Capitol Police, as well as three others who died in “medical emergencies”.

Police said both law enforcement and protesters deployed chemical irritants during the hours-long occupation of the Capitol building before it was cleared by law enforcement.

The woman was shot as the mob tried to break through a barricaded door in the Capitol where police were armed on the other side. She was hospitalised with a gunshot wound and later died.

The protesters abruptly interrupted the congressional proceedings in an eerie scene that featured official warnings directing people to duck under their seats for cover and put on gas masks after tear gas was used in the Capitol Rotunda.

With the crowds showing no signs of abating, President Trump tweeted: “Please support our Capitol Police and Law Enforcement. They are truly on the side of our Country. Stay peaceful!”

Earlier, at his rally, he had urged supporters to march to the Capitol.

Senators were being evacuated. Some House politicians tweeted they were sheltering in place in their offices.

Demonstrators fought with Capitol Police and then forced their way into the building, not long after a huge rally near the White House during which Trump egged them on to march to Capitol Hill.

Politicians had convened for an extraordinary joint session to confirm the Electoral College results.

Though fellow Republicans were behind the challenge to Biden’s 306-232 Electoral College victory, Senate Majority Leader Mitch McConnell sought to lower tensions and argued against it. He warned the country “cannot keep drifting apart into two separate tribes” with “separate facts.”

Mr McConnell declared: “The voters, the courts and the states all have spoken.”

But other Republicans, including House GOP leaders among Mr Trump’s allies were acting out the pleas of supporters at his huge Wednesday rally up Pennsylvania Avenue outside the White House to “fight for Trump.”

“We have to fix this,” said Rep Steve Scalise of Louisiana, the GOP whip.

The last-gasp effort is all but certain to fail, defeated by bipartisan majorities in Congress prepared to accept the November results. Mr Biden is to be inaugurated on January 20.

Still, Mr Trump vowed to he would “never concede” and urged the massive crowd to march to the Capitol where hundreds had already gathered under tight security.

“We will never give up,” Mr Trump told his noontime rally.

“We will never give up”

Vice President Mike Pence was closely watched as he stepped onto the dais to preside over the joint session in the House chamber.

Mr Pence has a largely ceremonial role, opening the sealed envelopes from the states after they are carried in mahogany boxes used for the occasion, and reading the results aloud.

But he was under growing pressure from Trump to overturn the will of the voters and tip the results in the president’s favour, despite having no legal power to affect the outcome.

“Do it Mike, this is a time for extreme courage!” Mr Trump tweeted.

But Mr Pence, in a statement shortly before presiding, defied Mr Trump, saying he could not claim “unilateral authority” to reject the electoral votes that make Mr Biden president.

As darkness began to set in, law enforcement officials worked their way toward the protesters, using percussion grenades to try to clear the area around the Capitol.

Big clouds of tear gas were visible. Police in full riot gear moved down the steps, clashing with demonstrators.

The Pentagon said about 1,100 District of Columbia National Guard members were being mobilised to help support law enforcement at the Capitol.

Related: Trump pleads with supporters to “go home in peace” hours after promising “never to concede”