Sir Philip Rycroft’s report has been doing the rounds, but media ignore the bigger picture: the Tories’ strategic use of racist nationalism. 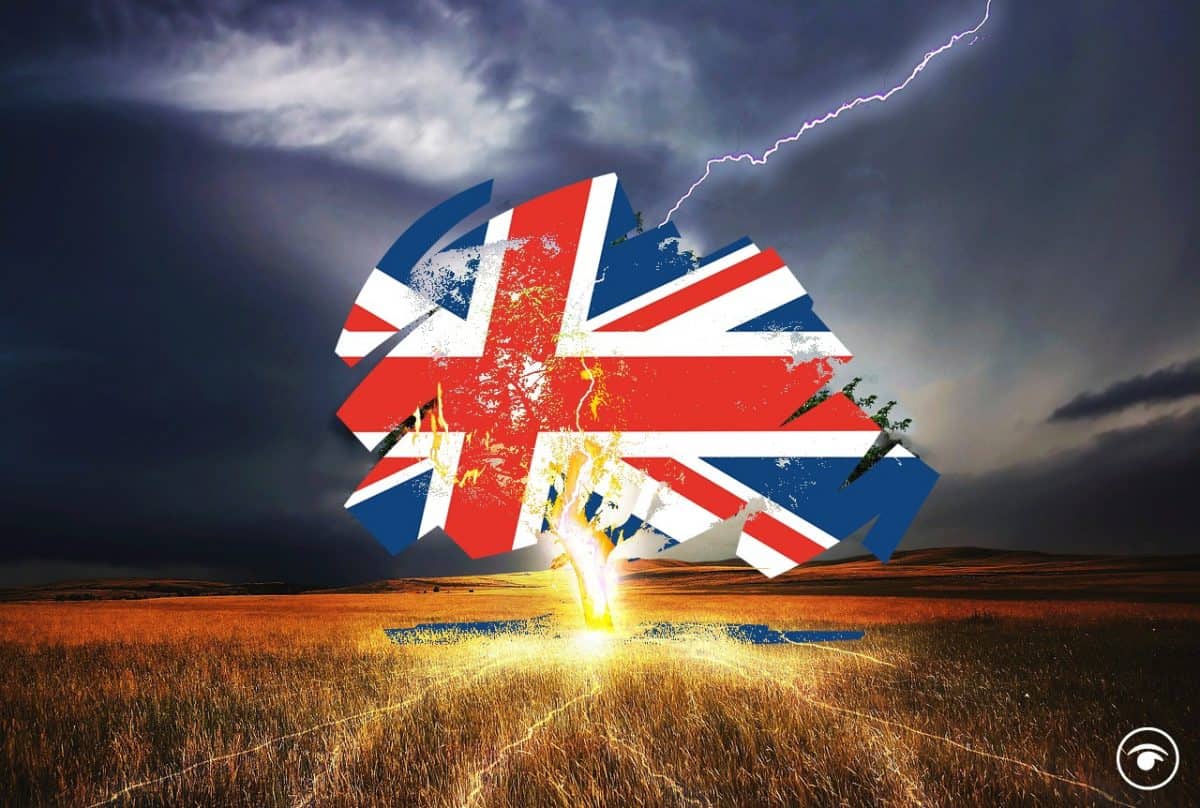 In their efforts to cling to power by appealing to Little Englanders, the Tories’ mask of Unionism has fallen. For an organisation officially called the Conservative and Unionist Party, the Tories conserve very little: 150,000 dead from COVID, public services sold to the “chumocracy,” and the future of the Union “increasingly in doubt.”

The latter comes from a report co-authored by former Brexit Department Permanent Secretary, Sir Philip Rycroft, who says that PM Johnson is perceived to “speak for England alone.” But power has always been concentrated in England, often to the detriment of the peoples of Northern Ireland and Scotland.

Given that most Welsh people wish to remain British, though polls suggest that even this is now changing, let’s consider the other nations of the UK.

England: A world of its own

With power and wealth concentrated in Westminster, the “British Empire” was largely the English Empire. “Unionism” was a late-19th century invention of Tories, whom in 1912 changed their name to the Conservative and Unionist Party. The new “Britishness” sought to suppress Irish Independence and hold onto Scotland by appealing to pro-English (now “British”) elements in the conquered territories.

A nation-state is an artificial construct that forces diverse and local communities into a single identity. Under pressure, the edifice easily cracks. Practical solutions include the European Union’s Schengen Area, which the UK never joined, that allows people to retain their national identity while moving freely across borders. The Good Friday/Belfast Agreement also proved to be a workable solution to national identity crises, until the Tories ripped it up.

Working on behalf of hedge funds that sought to escape EU regulations and which profit from instability, UKIP and the Brexit Party used Englishness as a campaign platform for Brexit. UKIP’s 3.8 million votes (12 per cent of the share) in 2015 came close to robbing the Tories of a majority. The plan to quash Brexit by holding a referendum backfired spectacularly. To hold onto power, the Tories simply copied their UKIP-Brexit Party rivals.

In doing so, they adopted a conscious strategy of Little Englandism, abandoning their Unionist posture. The strategy won them a landslide in 2019 but aggravated the long-standing grievances of Scots and Northern Irish, as did: the lack of engagement with devolved administrations, English media obsession with Westminster, and the insistence on dragging two, pro-EU countries out of the European Union.

Brexit became a self-destructive religion, with majorities of English Tory voters preferring the break-up of both the UK and their own party to remaining in the EU.

Centuries of struggle led to the Republic of Ireland Act 1947, which freed all but Northern Ireland (NI) from the UK, where the pro-British Protestant majority’s oppression of Catholics led to war (“the Troubles”) and thousands of deaths on both sides. In 1998, the Good Friday/Belfast Agreement (GFA) achieved fragile peace.

Under the GFA, NI established its own parliament (the NI Assembly). The border to the Republic remained open (appeasing Republicans/nationalists) while keeping NI part of the UK (appeasing Loyalists/unionists). Unlike Catholic Republicans who universally backed the GFA, Protestant Loyalists were split roughly 60/40 in favour. At first, the Democratic Unionist Party (DUP) stood against the Ulster Unionist Party to denounce the Agreement. But by the mid-2000s, hardcore Loyalists had no political representation as the DUP’s position softened.

In June 2016, most people in NI voted to Remain in the EU. Voting Leave was a luxury for the English, but Remain was a vital part of the GFA for many in NI. Republican politicians have seized the opportunity to push for NI’s reunification with Ireland. By murdering people and planting bombs, the Irish Republican Army’s successors are signalling to Westminster that the erection of any kind of border between the EU-member state Ireland and the Brexited NI is a return to colonialism.

But the Tories have also managed to alienate the pro-British Loyalist paramilitaries. Fearing that Brexit will facilitate a reunited Ireland, Loyalists were angered by Johnson’s acceptance of the Northern Ireland Protocol (to keep open the land border). In March this year, the Loyalist Communities Council formally withdrew support for the GFA.

Despite rhetorically condemning the ongoing rioting, Johnson rejected Ireland’s call to hold a summit. With covert British Special Forces expanding their presence and MI5 increasing their operations, the suppression strategy is back.

By the mid-1800s, Scottish Tories and English Liberals were accepting Scotland’s colonial-era grievances. By the 1930s, the Scottish National Party (SNP) was campaigning for devolution. In 1979, a plurality of Scots voted Yes to having their own parliament. But a last-minute Labour motion meant that 40 percent of the Scottish electorate had to vote Yes to validate the result (only >33 per cent voted Yes, which was still higher than the No vote).

Nationalists lost the Independence Referendum in 2014 (IndyRef). Two years later, Scotland voted overwhelmingly against Brexit in a procedure where the percentage standards of the 1979 referendum were not applied: just 37 per cent of the UK electorate (17.4 million out of a voting population of 47 million) voted Leave. Many see Brexit as a betrayal of IndyRef because the conditions for voting to stay in the UK never included being dragged out of Europe.

Johnson’s catastrophic handling of COVID and the disastrous fallout from Brexit have bolstered support in Scotland for IndyRef2. Despite the English propaganda machine’s overdrive attacks on First Minister Nicola Sturgeon, the SNP is expected to make significant gains in the upcoming elections. The Tory Party has little choice but to try to subvert IndyRef2.

In the works are amendments to the Scotland Act to “unambiguously” prevent a unilateral referendum. But should one go ahead, says a “senior Tory”: “The time to do it would be in the middle of economic chaos, not when it’s all looking rosy.” Bullying the EU is another idea: “Either you make clear that you won’t be welcoming [an independent] Scotland, or we will go around telling every small country in the EU that they should leave.” The latter is allegedly the brainchild of the Tory-linked Hanbury Strategy advisory firm, whose leaked documents also recommend “a new constitutional plan ready to roll out in case of an SNP victory in May.”

By expanding Britain’s Scotland-based nuclear arsenal, the Tories will be able to claim that Scottish independence would imperil UK security. Hundreds of civil servants, including MI6 officers, are reportedly being moved to Scotland.

For centuries, England-based administrations have imposed their politics, often by force, onto other peoples and tried to gain their support by fostering an invented notion of Britishness. Today, austerity, Brexit, and the government’s handling of COVID have intensified divisions between Irish and Britons and Britons and Scots.

The solution would have been for a sensible Westminster leader to address NI and Scotland’s grievances, deal with socioeconomic injustice, compromise on Brexit, and collaborate on pandemic planning. Instead, the Conservative and Unionist Party made their real views on the Union apparent by allowing a notoriously mendacious buffoon to whip up English nationalism as an electoral strategy. The government will now likely use the blunt approach to hold the UK together.

As usual, ordinary people are left to pick up the pieces.