Dominic Raab insisted the UK has been “at the vanguard” of imposing sanctions on Kremlin-linked money. 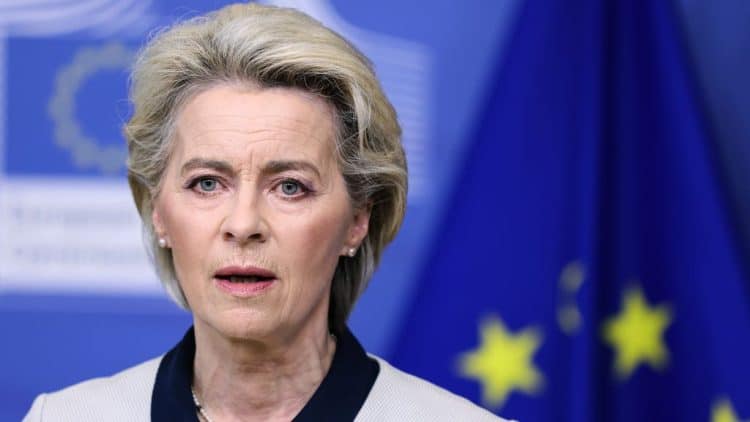 The European Union has issued 490 sanctions on Russian entities since the country first invaded Ukraine.

According to Bloomberg figures, the EU is leading the way in clamping down on Vladimir Putin’s inner circle.

Despite the tough-talking rhetoric coming out of the UK, it lags well behind in the list with just 16 entities sanctions since the Russian invasion.

It comes after Dominic Raab insisted the UK has been “at the vanguard” of imposing sanctions on Kremlin-linked money.

He said: “There has been a running commentary that the UK has somehow been slow – we’ve not been slow.

“We’ve been at the vanguard of taking action and, of course, what is really important is we act in concert with our allies, European, American and other Nato allies.”

What sanctions has the UK imposed to date?

Since the invasion of Ukraine, the UK has sanctioned 13 of Russia’s leading oligarchs, making 15 oligarchs in total on the list so far.

The Government said more than 220 individuals and entities have been “caught by our sanctions” since the invasion.

Overall, more than 500 Russian individuals, entities and their subsidiaries across all sanctions regimes now sit on the UK’s sanctions list, according to the Foreign, Commonwealth and Development Office.

Who are the latest individuals to be added to the sanctions list?

Russian billionaire Alisher Usmanov, who has had ties to Arsenal and Everton football clubs, has been sanctioned, while a travel ban and full asset freeze was also imposed on former Russian deputy prime minister Igor Shuvalov.

The Government said Usmanov’s net worth is an estimated $18.4 billion.

What other sanctions has the UK imposed?

The Government said it has put in place a “tough package” against Russia, including sanctioning the Russian Central Bank, and banning the Russian State and all Russian companies from raising funds in the UK.

The Government said it will also will also asset freeze every Russian bank.

Alongside the US and other allies, the UK says the measures against Russia amount to the largest set of financial sanctions in history.

He told BBC Breakfast: “We’ve made it clear and introduced measures so that three million Russian companies cannot raise loans or get listed on the UK stock market.”

Other actions include a ban on Russia’s flag carrier Aeroflot landing in the UK, as well as Russian private jets.

On March 1, Transport Secretary Grant Shapps said the UK had become the first country to pass a law banning ships with “any Russian connection” from entering its ports.

Legislation came into effect on Tuesday to prevent the Russian state and all Russian companies from raising debt in the UK.

So the UK is being as tough as it possibly can?

Labour Party chairwoman Anneliese Dodds told Sky News the UK has been “far too soft”, and rejected the Government’s claims that it has been working strongly against economic levers for Putin-linked individuals.

Mr Raab insisted the UK has not “been slow”, telling BBC Breakfast that Britain is “at the vanguard” of imposing sanctions on Kremlin-linked money.

Roman Abramovich, who is selling Chelsea Football Club, was not among the latest tranche of sanctioned oligarchs.

Can sanctions be imposed immediately?

Government sources have conceded that it could take “weeks and months” to build legally sound cases against wealthy and litigious targets.

Foreign Secretary Liz Truss is understood to have tripled the size of the sanctions team in recent months.

She will establish an Oligarch Taskforce of ministers and officials from departments including the Home Office, the Treasury and the National Crime Agency to co-ordinate sanctions and build cases against targets.

Ms Dodds said the Government must “act right now” and “stop dragging our feet”, voicing concerns that new measures could have “an 18-month window before they will come into action – that’s just not good enough”.

Is there more to come?

It is likely, yes. It is understood officials hope the shutting off of Russia’s access to the UK’s banking system by asset freezing major banks will eventually cover all Russian banks.

The UK also wants a full Swift ban against all Russian banks, stopping their access to the global financial system.

While there has been a focus on defence when it comes to targeting key sectors of strategic significance of the Russian economy for full asset freezes, officials plan to expand into other areas including services and energy.

Other possible measures could include trade measures such as banning hi-tech exports, and limiting the size of deposits in UK banks so rich Russians are not able to “hide” large amounts of money in domestic bank accounts.

All the sanctions against Russia could be extended to Belarus as punishment for its part in the invasion and it is understood officials are considering whether a complete trade embargo could be applied to Russian breakaway republics of Donetsk and Luhansk, in east Ukraine.

Officials are also believed to be working on a plan to sanction all members of the Russian parliament and the Russian national security council for their support of the invasion.

It has been acknowledged that it could take months to deliver on these wider plans.

Ms Truss has said the aim is to “cripple the Russian economy and starve Putin’s war machine”.

But Mr Raab has said while economic sanctions are “starting to bite”, Britain and its allies need to “bed in and have the strategic stamina for the long haul”.

He told BBC Radio 4’s Today programme people can expect that “Putin would resort to ever more barbaric measures as he gets frustrated”, saying that is what everyone needs to be “alert to”.