Ukrainian MPs gathered in the nation's parliament on Thursday and defiantly sung the national anthem. 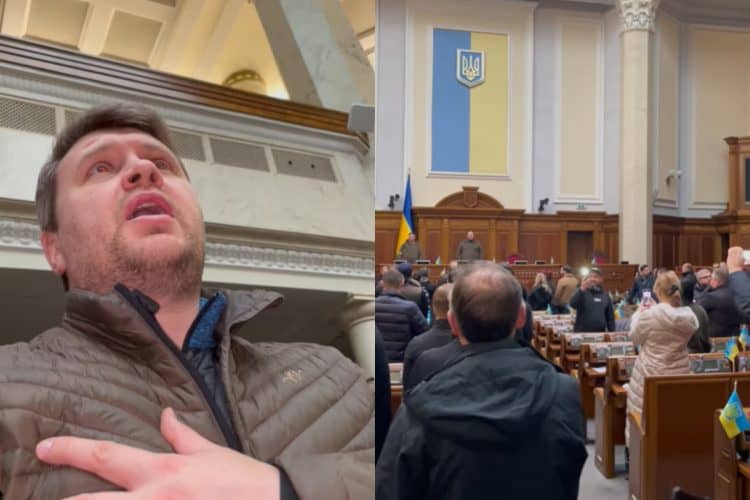 A Ukrainian MP has said singing in the nation’s parliament on Thursday sent a message to the world that “we’re not leaving”.

Inna Sovsun, deputy leader of the Holos Party, joined hundreds of fellow MPs in the Verkhovna Rada as they sang the anthem, which translates in English as “Glory and Freedom of Ukraine has not yet Perished.”

“I can’t explain what it feels like to sing a national anthem when we are at war,” Sovsun, 37, told the PA news agency.

“People were not panicking, people were determined… I think that is the general feeling in Ukraine right now.”

‘We are staying here’

Ukrainian MPs had been called for an emergency parliamentary session to pass legislation regarding Russia’s invasion, including the confiscation of Russian property.

“But I think the even more important thing about this emergency session was just to send the message that we as a parliament, we as an authority, are staying here,” she said.

“We are in Kyiv, we are keeping the situation under control and we’re not leaving.

“That was an important message both to the Ukrainian citizens, but also to the world.”

Fellow MP Vadym Ivchenko told PA: “When the plenary session begins we always sing the national anthem of Ukraine, but with music.

“Now we are singing without the music, because we are in the war… it means that all the members of parliament show that they are in Kyiv, they are trying to do their best.”

‘An important message to the world’

Sovsun has been staying with a friend in Kyiv since Russia invaded on February 24, abandoning her home in the north of the city.

Her boyfriend is with the Ukrainian army and she has not seen her son for eight days.

“(My son) asked me when I will be able to see him again, I started crying because I cannot answer that question,” she said.

Sovsun’s 61-year-old father has joined the territorial defence in the country, and she had not heard from him for three days until Friday morning.

“My mum is in western Ukraine… she was going slightly crazy with that, as you can imagine,” she added.

“We just got a message two hours ago that he is alive and well… I am lucky, so many people are not.”