It is expected that at least 12 people will put their names forward in a contest Mark Francois described as the "Grand National without. the fences". 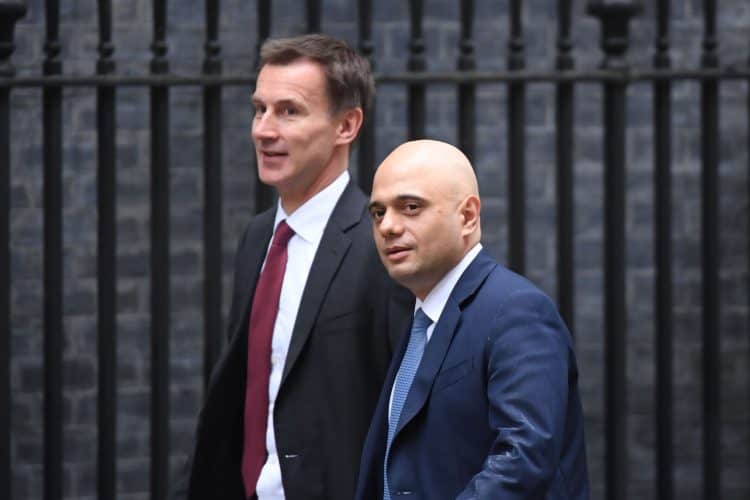 Eight Tories have so far put themselves forward to replace Boris Johnson as Prime Minister, just days after a collapse in party support forced his resignation.

Former health secretaries Jeremy Hunt and Sajid Javid have both pledged to slash corporation tax as they announced separate bids for the Tory leadership.

It comes after two serving Cabinet ministers, Chancellor Nadhim Zahawi and Transport Secretary Grant Shapps, revealed their intention to run for the top job in the space of an hour.

Declaring their candidacies in The Telegraph, Mr Hunt and Mr Javid both said they would not only scrap the former chancellor’s plans to raise corporation tax from 19% to 25% in April, but reduce the rate to 15%.

Mr Hunt also attempted to differentiate himself from the crowded field with a pitch based on his decision to stay on the backbench while Boris Johnson was at the helm of the Government.

Mr Zahawi, Rishi Sunak’s successor, had said earlier this week that “everything is on the table” when questioned over the tax rise.

The leadership contenders’ timescales for the change are different, with Mr Hunt slashing the tax to 15p in his first autumn Budget, while Mr Javid would set a “glide path”.

The pair spelled out their economic plans in separate interviews with the newspaper.

In addition to cutting corporation tax, Mr Hunt said he would remove business rates for five years for the communities most in need.

Most of those areas are in the so-called “Red Wall” of traditional Labour heartlands, the newspaper said, with a quarter of locations in England and Wales in line for the tax break.

Scotland and Northern Ireland would get money to match the policy.

“What matters is wealth creation, which means that people don’t feel that they need to leave a Bolton or a Bolsover because they can get better jobs in Manchester or London. They can actually stay there,” Mr Hunt said.

“That means helping them have opportunities at home that makes talented people want to stay, not go.”

Meanwhile, he pledged to continue pushing legislation to overwrite parts of the Northern Ireland Protocol through Parliament.

Mr Javid said his plan for the economy would cover both short-term measures – including a new package of support worth up to £5 billion to help with energy bills – and a “longer-term” vision for tax reform.

He said: “The Government can’t prevent the impact of high price rises on everyone. You can’t mitigate everything.

“The long way out of this, the better way, is to turbo growth. I’ve always believed in free markets, in low taxation, in light regulation, as the conditions that are necessary for growth.

“It was true 20 to 30 years ago, it was true under Margaret Thatcher, and it’s true now, because it’s how economies grow and how they work.”

Earlier, Defence Secretary Ben Wallace said that after “careful consideration” and discussion with colleagues and family, he would not stand to be party leader and the next prime minister.

Foreign Secretary Liz Truss is also widely expected to stand, with the Mail on Sunday reporting she will seek to advocate “classic Conservative principles”, and could declare her candidature as soon as Monday.

It was reported on Saturday that Boris Johnson intends to stand down as Prime Minister on Monday in order to run again for Tory leader.

But this suggestion was knocked down by a spokesperson for Mr Johnson as completely untrue.

Tory MP Mark Francois has said he believes at least 12 people will put their names forward.

He told GB News: “It looks like this is going to be the Grand National but without the fences, so we are probably heading for at least a dozen candidates at the moment.”

Launching his campaign, Mr Zahawi pledged to lower taxes for individuals, families and business, boost defence spending, and continue with education reforms that he started in his previous role.

Mr Shapps said he wants to rebuild the economy so it is the biggest in Europe by 2050, and address the cost-of-living crisis.

Ms Badenoch announced a plan for a smaller state and a Government “focused on the essentials”.

Mr Sunak launched his leadership bid with the message: “Let’s restore trust, rebuild the economy and reunite the country.”

Former minister Steve Baker has thrown his support behind Ms Braverman’s campaign, despite previously saying he was seriously considering putting himself forward for the top job.

As candidates have started to make their move, Tory MP Sir Charles Walker said it is incumbent on those running for leader that they “don’t knock lumps out of each other”.