Campaign group Led By Donkeys travelled to Redcar to 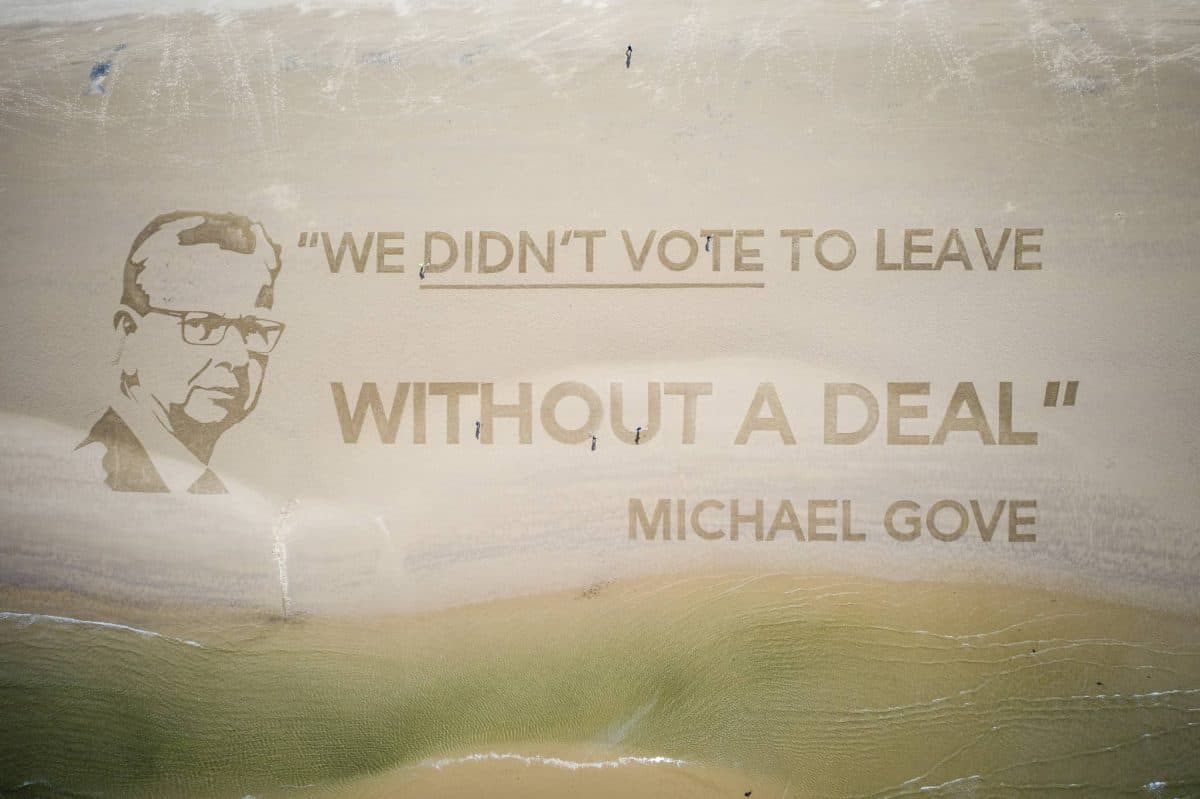 A portrait of Michael Gove so large it can “be seen from space” has been drawn on the sand on the North Yorkshire coast to condemn his stance on Brexit.

Anti-Brexit campaign group Led By Donkeys travelled to Redcar to install the 7,500 square metre drawing, which has a quote from the Cabinet minister in which he said the UK “didn’t vote to leave without a deal” in the 2016 EU referendum.

Since saying that in March in a Daily Mail article, the Chancellor of the Duchy of Lancaster has backed Boris Johnson’s decision to prorogue Parliament.

Led By Donkeys wrote on Twitter: “Hey Vote Leave leader @MichaelGove, remember in March you admitted there’s no mandate for No Deal cos nobody voted for it in the 2016 referendum?

“We thought we’d remind the country via a 7500sq/m sand installation on Redcar beach that can be seen from space. You’re welcome.”

Led By Donkeys’ Oliver Knowles told the PA news agency: “The message strikes at the heart of the legitimacy of no deal.

“Here’s the Government hurtling headlong towards no-deal and we have one of the Brexit leaders basically saying we didn’t vote for it in the referendum and there is no mandate for it.”

Mr Knowles, one of four men behind the group, said the Redcar portrait was made using rakes by a company specialised in sand art and took over four hours to create.

The vast image remained in the sand for a couple of hours before being washed away by the tide, but not before a drone captured a bird’s eye view which has been shared thousands of time on Twitter.

Led By Donkeys said it installed the giant sand drawing in the north east because they believe the region will be “hit hard” by a no-deal Brexit due to negative effects on sectors such as the car industry.

“Gove is right, nobody ever voted for a No-Deal Brexit,” Led By Donkey’s Will Rose said.

“Now the Government is suspending Parliament so even MPs will find it hard to have a say.

“We decided to do this sand installation in Redcar because the north east will be hit hard by a no deal Brexit. Nobody voted to lose jobs and investment.”

On Sunday morning Mr Gove refused to confirm the Government would abide by legislation blocking a no-deal Brexit if it is forced through by Tory rebels and the opposition when the Commons sits this week.

Speaking on BBC One’s The Andrew Marr Show he said: “Let’s see what the legislation says.

“For me, the most important thing is to bear in mind actually, we already have legislation in place which an overwhelming majority of MPs voted for.

Asked what can be expected next from their protest demonstrations, Led By Donkeys said it plans to be “really busy” before October 31’s Brexit deadline and that it believes protests in city centres across the country this week are “moving beyond the Remainer camps”.

“What we’re seeing of the last few days is a huge protest movement emerging not just against Brexit and no-deal but in opposition to the undermining of Parliament and our representatives,” said Mr Knowles.

“I think we will have more to say on that.

“The fact is our political leaders have got very used to being able to say whatever they like without being challenged.

“That’s exactly why the Led By Donkeys campaign really works because it pulls their words back into the public domain, whether it’s to put it on a billboard, onto Twitter or onto a beach like we’ve done today, and actually gets people to reappraise the words against the reality they see unfolding.”