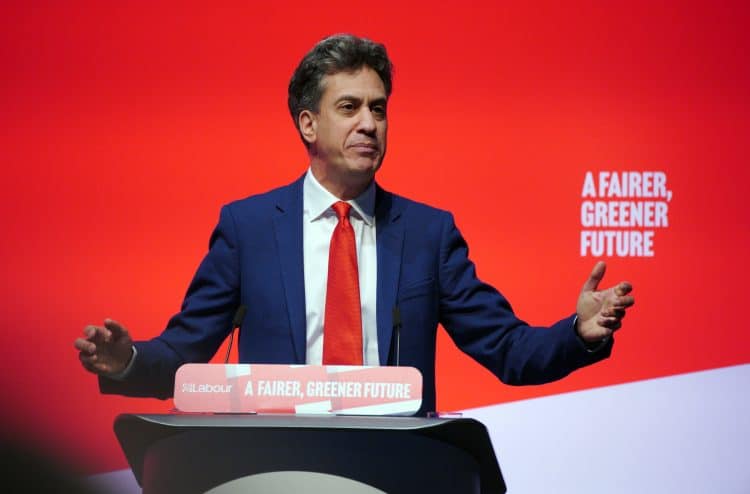 In his speech at the Labour Party conference in Liverpool, the shadow climate change secretary said a Labour government would make Britain the first major country in the world to set and achieve the target of zero-carbon power by 2030.

Mr Miliband criticised the Government’s decision to open the door for fracking and ripped into the new Business Secretary, Mr Rees-Mogg, for coming up with an “energy policy for the 1820s”.

He told the exhibition centre: “A man who says we should extract ‘every last drop’ of oil and gas, even though it would mean three degrees of global warming.

“A man who says ‘trying to forecast the climate is unrealistic, the cost is probably unaffordable’.

“Let’s call it what it is: this is dangerous climate denial.

“If you want an energy policy for the 1820s, Jacob Rees-Mogg sure is your man. If you want one for the 2020s, we need a Labour government.”

On what Labour would do to make Britain a “clean energy superpower”, he stressed the low cost of solar and wind energy and concerns over global supplies.

He said: “That’s why for bills, for security and for climate, I am proud to announce a Labour government will make Britain the first major country in the world to set and achieve the target of zero-carbon power by 2030.

“The essential foundation of the drive to net zero. Britain a clean energy superpower. Saving £93 billion off bills.

“We will do it by sweeping away Tory dogma that is holding our country back. It is within our grasp. Isn’t it?”

Miliband said there is an “undeniable truth of our age” that it is now “cheaper to save the planet than to destroy it”.

Delegates gave the shadow minister a standing ovation at the end of his speech.

Watch the final moments below: