Her Sky News interview also got interrupted by an unwanted guest (not Steve Bray) who caused a bit of off-camera commotion. 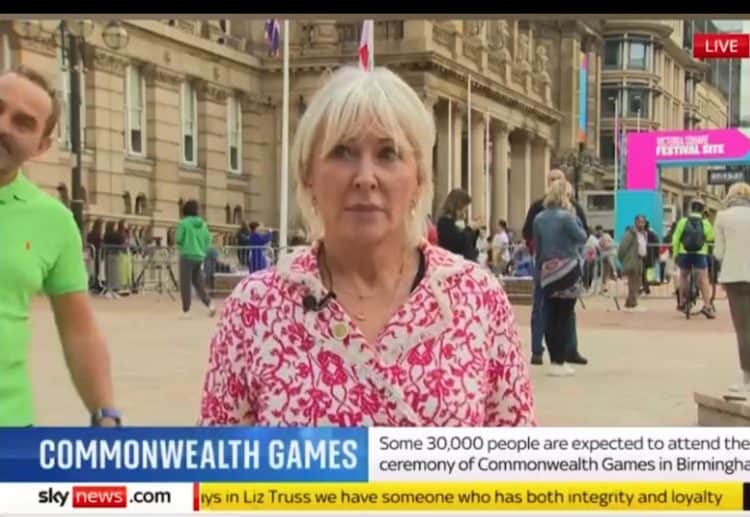 Nadine Dorries was out to distract this morning as she batted away difficult questions by using the Commonwealth Games and the Lionesses as a shield.

The Commonwealth Games open on Thursday, promising to be the biggest sporting festival in the UK since the London Olympics a decade ago.

The event will open in Birmingham with the Prince of Wales in attendance, representing the Queen.

Culture Secretary Nadine Dorries said the city is “buzzing” and defended the expense of hosting the games at a time when the country is facing a cost-of-living crisis.

The event had a £778 million budget, funded by the Government and Birmingham City Council.

Ms Dorries rejected claims it was a “vanity project” and stressed the importance of the Commonwealth as a trading and geopolitical bloc.

Birmingham was awarded the games after scheduled host Durban in South Africa pulled out over financial problems.

Ms Dorries told Sky News: “It’s not a vanity project… This is hugely important” before the interview got interrupted by an unwanted guest:

She also told Kay Burley that Boris Johnson was “removed via a coup” during the interview:

Earlier in the day, Dorries seemed less than keen to tackle important questions from Ben Shephard and Ranvir Singh on Good Morning Britain.

She used the success of the Lionesses, who progressed to the final of the EUROS this week.

Watch the blatant distraction move below:

Related: Centrica profits soar on the back of rising energy bills – shareholders to cash in