“We must hope that the fallout from the shambles does not turn into an avalanche of political trouble." 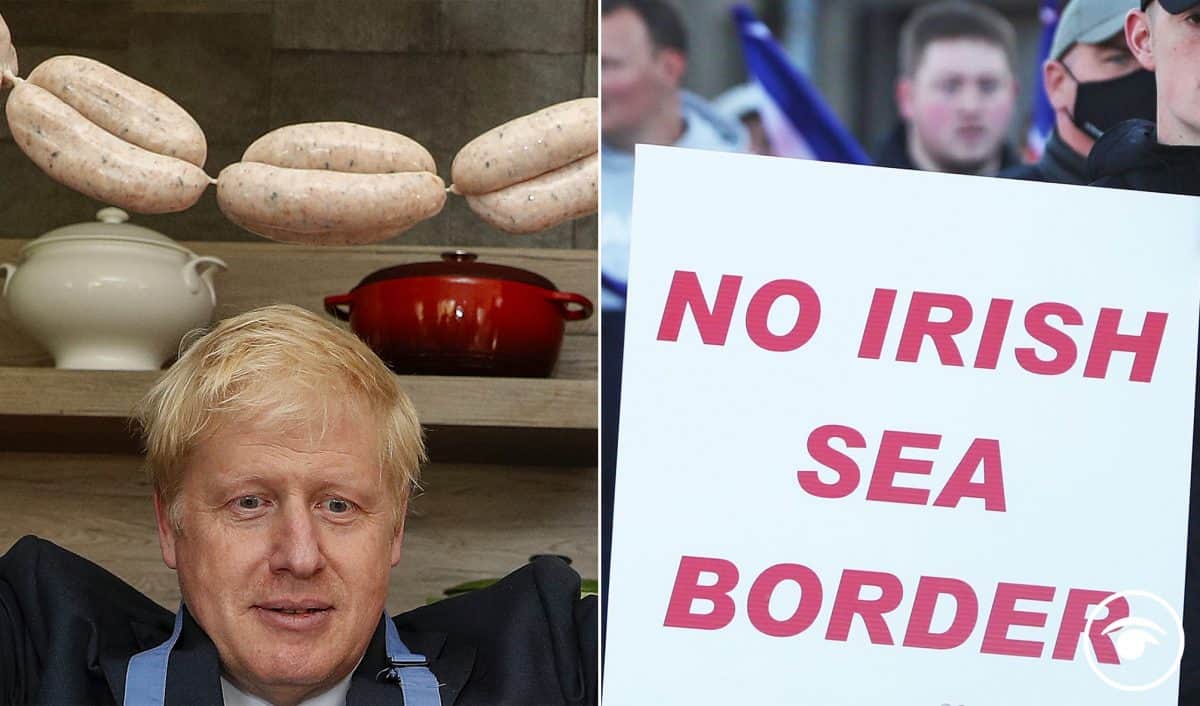 The Environment Secretary said there are “positive indications” that a truce will be reached in the “sausage war” trade dispute with the European Union (EU) over the Northern Ireland Protocol. However, his claims were rubbished by  the former chairman of the Independent Commission on Policing in Northern Ireland.

The UK has applied for an extension to a grace period allowing chilled meats to continue being shipped from Great Britain to Northern Ireland after the end of this month, when the current arrangements are due to expire.

Downing Street told reporters on Wednesday it had received no reply to its formal request for an extension and that work between the two sides was “ongoing”.

Mr Eustice told LBC Radio: “I think we are getting some positive indications and it’s always our view that it’s better if we can reach agreement with the European Union on these things.

“It didn’t make any sense to simply say that there’s a ban on the sale of sausages to Northern Ireland, we’re still in dialogue with the European Union about some longer-term solutions on the wider issues around export health certificates.

“While those are ongoing, I think it makes sense for them, just for a few more months, to leave the current arrangement we have in place.”

However ex-senior Tory MP Chris Patten has called on the UK government to “tell the truth” and implement the “legally binding” Northern Ireland protocol, saying “the problem at heart is not the sausages you get from Sainsbury’s but the porkies that we all get, home and abroad, from Downing Street.”

Patten was delivering the inaugural lecture in memory of the former deputy leader of the SDLP, Séamus Mallon, reports The Irish Times.

He also said it seemed certain that the “lack of trust in the British government on both sides of the community in Northern Ireland” would “do nothing to halt the momentum” towards a vote “sooner perhaps rather than later, for a decision to get rid of the border once and for all and reunite Ireland.”

He added: “London must work in good faith with the EU to identify possible flexibilities in the application of the protocol, including flexibilities that are available to the British government itself.

“It is not for our Brexit government simply to wish away what it negotiated and blame any consequences on others as we face the marching season in July.

We should be blunt about this. It matters to our international reputation,” he said.

“We must hope that the fallout from the shambles does not turn into an avalanche of political trouble,” he said.

Lord Patten – "It's not for our brexit govt simply to wish away what it negotiated & then blame any consequences on others…. the problem at heart is not the sausages you get from Sainsbury's but the porkies that we all get… from Downing Street…" pic.twitter.com/ajnlgnd1qm