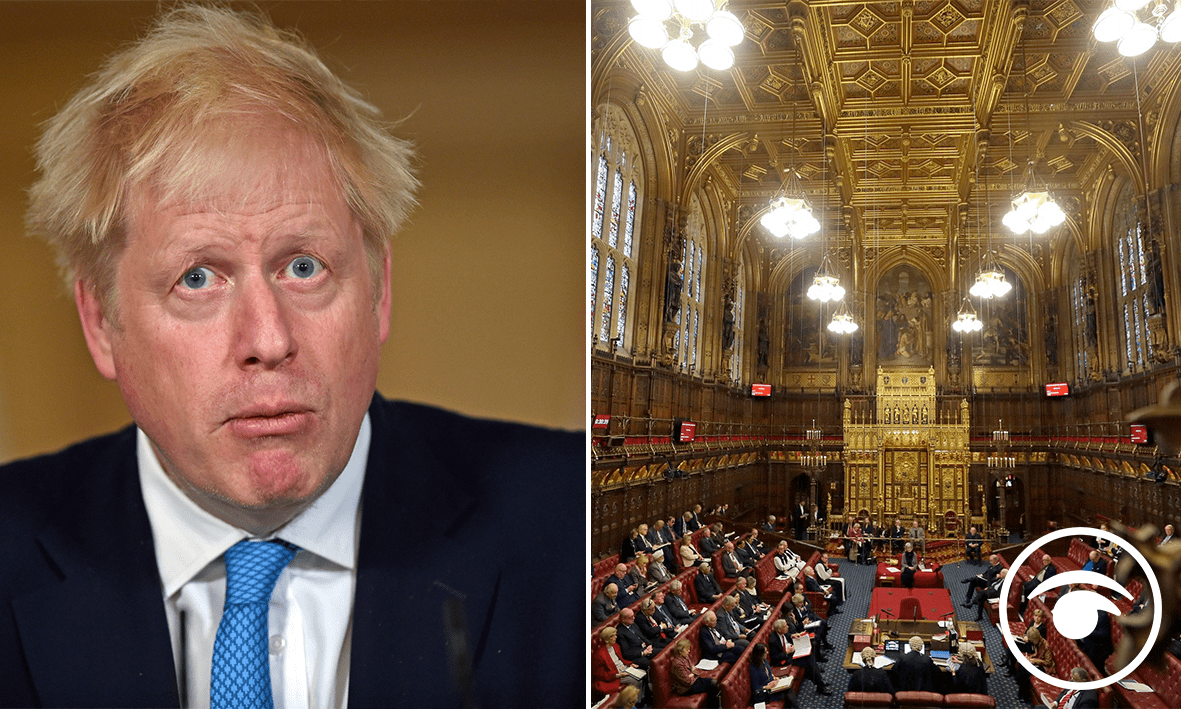 The PM has suffered two major defeats over his controversial Brexit legislation, as peers stripped out powers that would enable ministers to break international law. However, the Government immediately responded by insisting it would not back down.

Conservative former leader Lord Howard of Lympne led the calls for the Prime Minister to “think again” and remove the contentious parts of the UK Internal Market Bill, warning that the Government is using the language of “law breakers” everywhere.

Cross-party amendments were tabled to strike out clauses linked to the most contentious part of the Bill, namely part five, which gives ministers the power to breach the Brexit divorce deal – known as the Withdrawal Agreement – brokered with Brussels last year.

They then voted 407 votes to 148, majority 259 to remove clause 44, relating to the Northern Ireland Protocol.

All the other controversial clauses were removed without votes.

The defeats are thought to be among the biggest suffered by the Government in the Lords for several years.

Ministers have insisted powers to override the Withdrawal Agreement are needed to protect the relationship between Great Britain and Northern Ireland, but critics argue the powers are not necessary.

Baroness Angela Smith, Labour’s leader in the House of Lords, said in a statement: “I am sure some in Government will initially react with bravado and try to dismiss tonight’s historic votes in the Lords.

“To do so, however, would underestimate the genuine and serious concerns across the UK and beyond about ministers putting themselves above and beyond the rule of law.

The division list showed 44 Conservative peers rebelled to vote to remove clause 42 from the Bill.

During the debate, Independent crossbench peer Lord Judge – a former head of the judiciary – advised the House of Lords should be “neither complicit nor supine” and should vote against clauses in the Bill.

The Archbishop of Canterbury, Justin Welby, raised concerns that the Bill “fails to take into account the sensitivities and complexities of Northern Ireland and could have unintended and serious consequences for peace and reconciliation”.

Tory Lord Cormack said the law-breaking clauses in the Bill must go and threatened to vote against them “again and again” if necessary.

Concluding the committee stage debate, Cabinet Office minister Lord True said it is “entirely proper and constitutional” for Parliament to legislate “in a manner inconsistent with international law”.

He added: “That is an age-old principle underpinning our constitution.”

The Bill will undergo further scrutiny in the Lords before it returns to the Commons, where the Government has said it plans to retable the clauses removed by peers.

A Government spokesperson said: “We are disappointed that the House of Lords has voted to remove clauses from the UK Internal Market Bill, which was backed in the House of Commons by 340 votes to 256 and delivers on a clear Conservative manifesto commitment.

“We will re-table these clauses when the Bill returns to the Commons.

“We’ve been consistently clear that the clauses represent a legal safety net to protect the integrity of the UK’s internal market and the huge gains of the peace process.

“We expect the House of Lords to recognise that we have an obligation to the people of Northern Ireland to make sure they continue to have unfettered access to the UK under all circumstances.”

Labour’s leader in the House of Lords, Baroness Angela Smith said: “I am sure some in government will initially react with bravado and try to dismiss tonight’s historic votes in the Lords. To do so, however, would underestimate the genuine and serious concerns across the UK and beyond about ministers putting themselves above and beyond the rule of law.

Sir John condemned Mr Johnson’s position, insisting it was “unprecedented in all our history – and for good reason”.

Sir John said the UK Internal Market Bill, which ministers have admitted will breach international law, had “damaged our reputation around the world”.

“And, it’s as controversial a piece of legislation as it seems, within the UK as it is outside of the UK.”