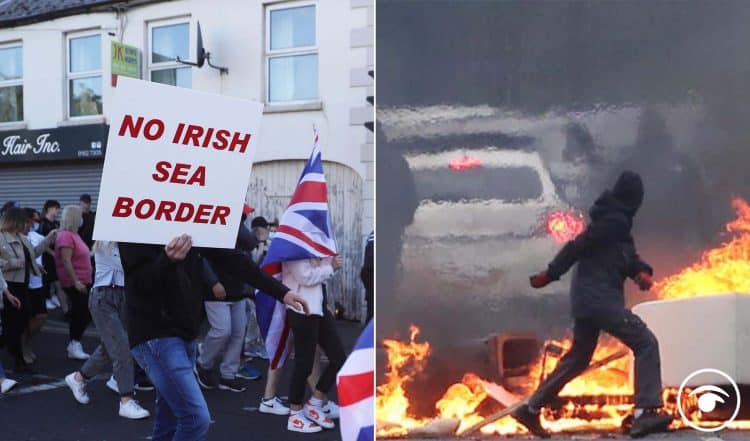 DUP leader Sir Jeffrey Donaldson has said he fears unrest on the streets of Northern Ireland over the Brexit protocol.

Sir Jeffrey was speaking after warning his party’s ministers will resign from the Stormont Executive if changes to the protocol are not delivered by November.

Earlier this year, there was significant disorder with loyalist anger at the protocol forming a border in the Irish Sea blamed.

Sir Jeffrey said he fears a return to that.

“Earlier in the year we had people back out on the streets again.

“There was civil unrest, there was violence on the streets.

“I don’t want that to happen, I want Northern Ireland to be peaceful, prosperous, stable but I’m worried that if this protocol continues and people become more fearful about the future, then again we will see people back out on the streets, and that is not good because it has the potential for further unrest.

He added: “Right now the future of the union is threatened by this protocol and I hope the UK government will do the right thing and honour the commitments they have already given to resolve these issues.”

Sir Jeffrey said he has been urging all summer against violence on the streets.

“I have been saying to the boys on the streets is ‘please don’t be on the streets’, and you will note that all summer Northern Ireland has been peaceful,” he said.

“That didn’t happen by coincidence, that happened because people like me, my political colleagues and community leaders worked hard and persuaded people that politics is the way to resolve these issues, not street protests.

“But I’m simply saying that if politics fails and if we don’t find the solutions then I fear that there will be others who may decide to step into the gap.

“I don’t want that to happen so I am committed to finding political solutions and I want to do that quite quickly.”

The protocol was agreed by the UK and EU as a way to maintain a free-flowing land border on the island of Ireland after Brexit.

Sir Jeffrey has said the Government committed to protect Northern Ireland’s place in the UK internal market in the New Decade, New Approach agreement which restored Stormont after a three-year suspension.

“All I am asking the Government to do is to is honour New Decade, New Approach, honour that agreement, honour the basis upon which devolution was restored, do the right thing and protect our place within the UK because that is what the people of Northern Ireland actually want,” he said.

Sir Jeffrey also contended the basis of devolution will be “undermined” unless New Decade New Approach is honoured.