“It’s very unfortunate that having spent 20 years building really good relations between Belfast and Dublin, between Dublin and London, we’ve thrown all that away in the context of Brexit and this latest row has made it a whole lot worse.” 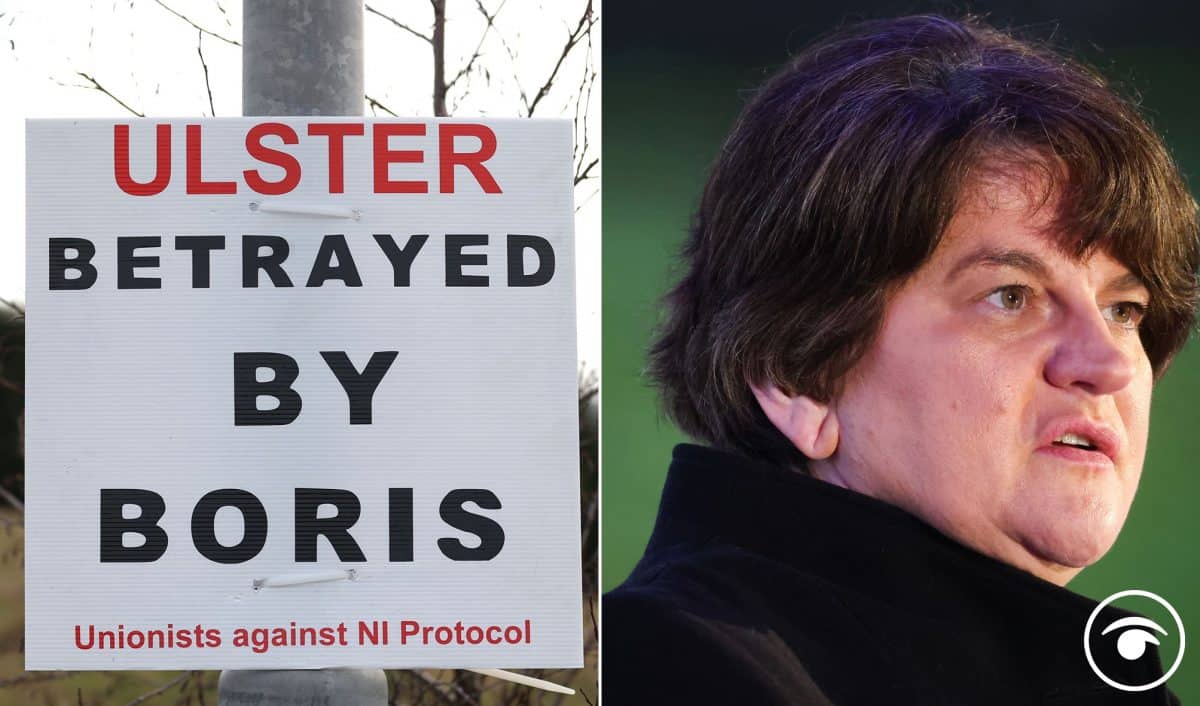 The Northern Ireland Protocol undermines the guiding principles of the region’s historic peace deal, a former No 10 chief of staff has warned.

Jonathan Powell, who worked for Tony Blair and was involved in negotiations that forged the Good Friday Agreement, said he understood why loyalists and unionists were upset by the economic border in the Irish Sea.

Mr Powell said the 1998 agreement offered protections for nationalists and unionists and gave both communities assurances that their respective identities and constitutional affiliations were being respected.

He said creating trade barriers between Northern Ireland and the rest of the UK upset that balance in respect of unionism.

However, Mr Powell questioned the stance of the region’s main unionist party – the DUP – on the protocol, suggesting its vocal opposition was motivated less by principle and more by political fears of being outflanked by hard-line rivals.

He also criticised the Government’s move to unilaterally delay the full implementation of the protocol, accusing it of unnecessarily “poking the EU in the eye” when it needed to work with the bloc to find solutions to the trade problems.

Mr Powell, who has been involved conflict resolution work since leaving politics, was involved in an initiative that saw a new umbrella group formed in 2015 to represent the main loyalist paramilitary organisations in Northern Ireland.

That group – the Loyalist Communities Council – wrote to Mr Johnson and Taoiseach Micheal Martin this week to say the paramilitaries were temporarily withdrawing their support from the Good Friday Agreement in protest at the Protocol.

Mr Powell said he regretted the group’s move but said he had received an assurance that it did not signal an intent to return to violence.

On loyalist concerns about the Protocol, he said: “I think Brexit was always going to have an impact on the Good Friday Agreement and that’s what John Major and Tony Blair pointed out during the referendum campaign in 2016 – that if you leave the single market and you leave the Customs Union, there’s got to be a border somewhere, that’s an insoluble problem.

“If you put the border on the island of Ireland you’re going to disrupt the rights of nationalists and republicans who under the Good Friday Agreement could feel Irish, or British, or both.

“If you put it in the Irish Sea then you’re obviously infringing the rights of the unionist community.

“And that was the problem and that’s why Theresa May for a long time tried to find a different solution with the ‘backstop’, where the whole United Kingdom remained in the Customs Union.

“Boris Johnson threw that out of the window in 2019 and signed up to the Protocol, putting the border in the Irish Sea.

“It was perfectly clear to everyone at the time that’s what he was doing.”

Mr Powell claimed not many unionists, including the DUP, made “a fuss about it at the time”.

“This issue was decided some time ago and if people had a problem with it, it’s strange they didn’t raise it then,” he said in an interview with BBC Radio Ulster.

Mr Powell said he understand why people were now upset at evidence of trade disruption since the Protocol came into effect, but he added: “The unionists politicians and the DUP did not at the time in 2019 when Boris Johnson betrayed them make a great fuss about it, they swallowed it, they said: ‘OK, we’ll go ahead with this.’

“They’re raising it now partly, I think, because of the actual public anger at what’s happening in practical terms and the fact that opinion polls show the TUV and Jim Allister (Traditional Unionist Voice party and its leader) going up in the polls and them going down, they see they’ve got a problem, and they feel they have to get onto the issue.”

On the loyalist paramilitary announcement, Mr Powell added: “This is not a reprise of our ghastly history, so I’m very hopeful that while this is reflecting a lot of anger about what’s happened with the Protocol that we will not be going back to the Troubles because of this.”

Mr Powell said Northern Ireland had to find allies in Dublin and the wider the EU to help address the issues around its continued place in the single market.

“That means many of the decisions that affect it will be made in Brussels. People in Northern Ireland will have very little ability to change decisions in Brussels. The UK is no longer part of the EU – Dublin is; Dublin will be able to influence what happens in Brussels.

“And as that border grows wider – as it will, because Britain is going to diverge from the EU, that’s the whole point of Brexit – there’ll be more issues that need to be checked across that border. People will feel more and more that they’re economically living in Ireland rather than in the UK.”

Mr Powell said the Government’s actions in extending Protocol grace periods without EU approval were counterproductive at a time when it was important to build relationships, rather than damage them – particularly in regard to Ireland.

“That’s why it’s such a silly idea to poke the EU in the eye, when you need the EU to cooperate to make this thing work, get things back into supermarkets and garden centres.”

He added: “It’s very unfortunate that having spent 20 years building really good relations between Belfast and Dublin, between Dublin and London, we’ve thrown all that away in the context of Brexit and this latest row has made it a whole lot worse.”