The clue is in the name, Brandon. 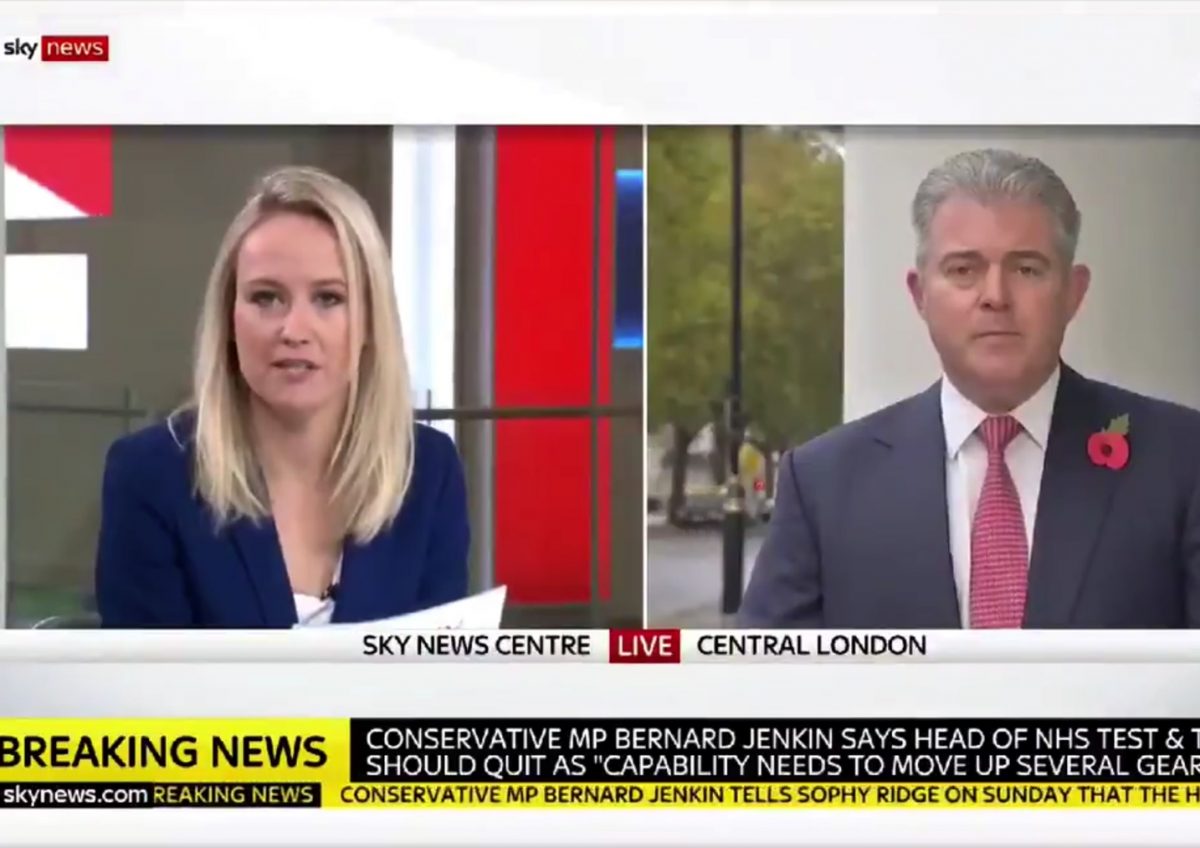 Brandon Lewis became a laughing stock on social media today after he tried to defend the £12 billion cost of the UK’s test and trace system.

Speaking to Sky News presenter Sophy Ridge the Secretary of State for Northern Ireland said that it was “misleading” to say that the Serco system cost that much because the figure accounts for both testing and tracing.

A slightly bemused Ridge reminded him that “the clue is in the name” before moving on with her line of questioning.

Brandon Lewis tells #Ridge that it's misleading to say that the Serco test & trace system cost £12b as that is the cost of both testing & tracing. #Ridge – The clue is in the name, testing & tracing. ?? pic.twitter.com/auVLmg72cI

There has been deepening concern among ministers and MPs that the system is failing to stem the spread of coronavirus, with one senior Conservative MP called for Baroness Harding to be replaced by a senior military commander.

Labour have warned her position is “untenable” as it emerged ministers were considering cutting the time people have to self-isolate if they have been in contact with someone who has the disease because of concerns over public compliance.

At the same time it was reported that Boris Johnson has become “disillusioned” with the data he is receiving from Test and Trace after some of the figures he was given turned out to be inaccurate.

Mr Lewis rejected calls for Lady (Dido) Harding – who is a Conservative peer – to be dismissed, although he acknowledged that the service needed to improve.

“What Dido has done is put together and drive forward a team that has come on so much in the last few months,” he told Sky News’s Sophy Ridge on Sunday programme.

“We want to see it improve, we want to see it grow and get better and better. That’s how we fight this virus. But actually I think Dido and the team have done a very good job to get to where we are.”

However, in a scathing attack, senior Tory backbencher Sir Bernard Jenkin said there was a “vacuum of leadership” at the top of the organisation and that public consent and co-operation was “breaking down”.

A spaghetti of command and control at the top

Writing in The Sunday Telegraph, he said Lady Harding should be given a “well-earned break” so she and others could “reflect on the lessons learned so far” and that a senior military figure should be appointed in her place.

“There is a spaghetti of command and control at the top, which is incapable of coherent analysis, assessment, planning and delivery,” he wrote.

“The immediate priority is to fill the vacuum of leadership in Test and Trace, which is destroying cooperation and compliance.

“Government harnessed the military to regain control in the foot and mouth crisis; the Prime Minister should follow that example today, by installing a single leader, a three or four star military commander with a reputation for handling complexity under stress.”

Appearing on the Sophy Ridge on Sunday programme, Sir Bernard, who chairs the Liaison Committee of senior MPs which questions the Prime Minister twice a year, insisted his comments about Lady Harding had been meant “kindly” and that she was a “tremendous asset”.

However, he added: “The Test and Trace capability clearly needs to move up several gears and it’s what leadership does, not who leadership is that really matters. It is the sense that there is a lack of an overall strategy which I think is at the heart of the problem.”