Douglas Ross has recalled the moment he urged the Prime Minister to resign over the partygate affair. 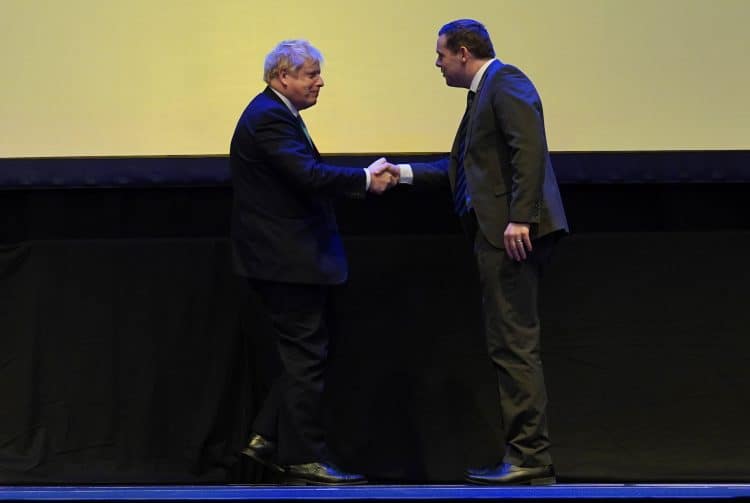 Mr Ross was among the first senior Tories to tell the Prime Minister to go earlier this year over partygate, before he rescinded his calls citing the need for stability at the top of Government when Russia invaded Ukraine.

Speaking at an event at the Edinburgh Festival Fringe with broadcaster Iain Dale, Mr Ross recalled Mr Johnson’s reaction when he told him to quit immediately after a session of Prime Minister’s Questions.

“Because I was one of the first senior figures to tell the Prime Minister to resign, he was not particularly pleased with that,” Mr Ross said.

“He was angry, one of his MPs was saying they no longer had confidence in him, I think it would be a difficult conversation to have for any party leader to have your MPs telling you that, particularly when you’re the Prime Minister – that ratchets it up a notch.”

When asked if Mr Johnson had used “Latin words” – a euphemism for swearing – Mr Ross said: “They were rude, they weren’t necessarily Latin.”

Within hours of his stance becoming public, then leader of the House of Commons Jacob Rees-Mogg repeatedly described Mr Ross as a “lightweight” in the party.

Mr Ross said: “This is clearly a line, they wanted to dampen down any potential dissent.

“When Jacob Rees-Mogg made those comments, I said ‘well, you’re entitled to that view’ – I disagree with it, I’ve never said anything about Jacob Rees-Mogg, I don’t think we’ve actually ever spoken before in the five years that I’ve been in the House of Commons.

“For someone who prides himself on being very courteous to colleagues, it was a surprise.”