Appearing at a panel event at the Edinburgh Fringe on Saturday, Sturgeon said: “He was a disgrace, let’s be honest.” 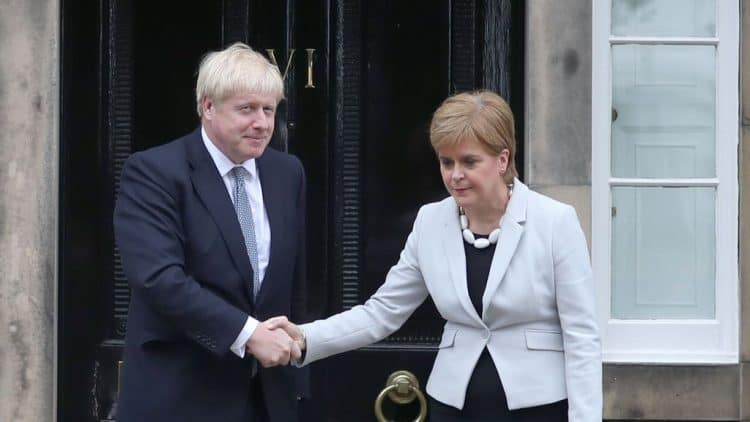 Nicola Sturgeon said Boris Johnson has been the only Prime Minister she has worked with who was “a disgrace to the office”.

Speaking at a panel event at the Edinburgh Fringe on Saturday afternoon, hosted by broadcaster Ayesha Hazarika, Ms Sturgeon called the Prime Minister a “disgrace”.

“The sooner he’s gone, the better.”

“The sooner he’s gone, the better”

Ms Sturgeon said the idea that parties were taking place during the Covid-19 pandemic “blew her mind.”

“The idea that this could have happened while the rest of country was going through the horrors of it really blows my mind,” she told audience members.

“Parties themselves are bad enough, but it was the lying, frankly, and the constant attempt to shift the goalposts and the narrative.

“He was a disgrace, let’s be honest.”

Four prime ministers have been in Downing Street since Ms Sturgeon took office in 2014 and she joked to audience members she never thought she would “look back fondly” on Theresa May as prime minister.

“At the beginning of Covid, I thought, it would be far better to have Theresa May – she always knew her stuff. She knew her brief,” Ms Sturgeon said.

She joked that Ms May was a “better dancer than I am”.

The First Minister called for more diversity in politics and praised Scottish Labour for having diverse leaders.

She added: “Here’s a sentence you’ll never hear me utter before: to be fair to Labour in Scotland, they’ve already had a woman leader and they’ve currently got a Muslim leader so UK Labour really has to get its act together on diversity.”

When asked who she would prefer to see as prime minister, Ms Sturgeon shrugged and laughed and said none of them will win an election in Scotland.

She branded the choices facing voters in England as “terrible” and accused Labour leader Sir Keir Starmer of being “a pale imitation of the Tories”.

Ms Sturgeon also addressed comments made by Tory leadership contender Liz Truss who said she should be “ignored”.

She said: “I am the democratically elected First Minister and you can only be in that position if a significant amount of people vote for you.

“People in Scotland are getting increasingly tired of being ignored by Tory prime ministers.”

Ms Sturgeon also hit out at former leader of the Scottish Conservatives Ruth Davidson for entering the House of Lords.

“So all of the good bits of politics without the tough bit of getting elected. I don’t think that’s a particularly good thing to do.”

Ms Sturgeon took questions from some audience members who asked her if it was possible to have a “good-natured debate” about independence.

“Of course it’s possible to have a good natured, civilised debate about independence but that requires all of us involved in that,” she said.

“The only appropriate way to decide matters we disagree on is through democracy.”