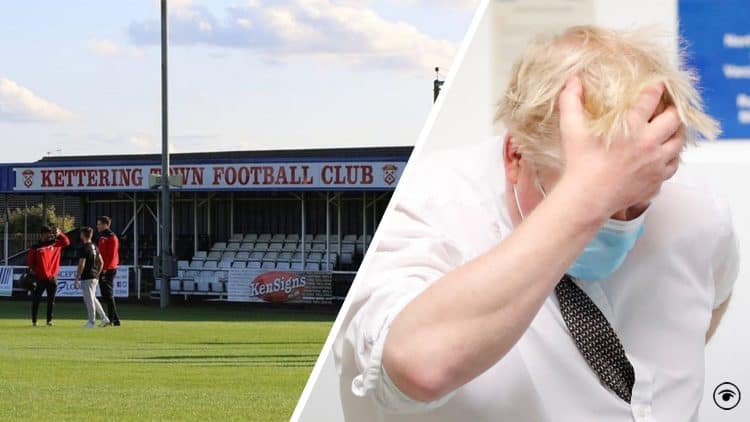 Boris Johnson’s paltry excuse for attending a lockdown-busting party was dismantled by Kettering Town following a disappointing loss in the league last night.

The National League North outfit took aim at the PM after it was revealed he attended a BYOB event along with his wife in May 2020 when the rest of the country was observing strict lockdown rules.

Johnson apologised for being there in the House of Commons yesterday but said no further action would be taken until the results of an enquiry were released.

The excuse has been widely mocked on social media, while Labour MP Ed Miliband seemed to sum up the nation’s feelings during an LBC interview in which he said: “If I went to a party, I know I went. I don’t need Sue Gray to tell me I went.”

Referencing their 1-0 defeat at Northamptonshire rivals Brackley Town in the Vanarama National League North on Tuesday evening, Kettering Town seized the opportunity to give the PM a kicking too.

They wrote on their Twitter account @KTFCOfficial: “We agree and understand that there have been rumours that we lost last night’s match.

“We, of course, could’ve done things differently, but would advise people to await the outcome of Sue Gray’s inquiry before jumping to any conclusions… #AfternoonPrimeMinister | #NN15 | #KTFC”

The tweet had been liked and retweeted a number of times before it caught the attention of former Manchester United and England right-back and top Sky Sports pundit Gary Neville, who has been outspoken in his criticism of the government in recent weeks.

Neville retweeted the tweet and also followed the club on the social media platform, which then ensured it went viral and was seen by thousands of people across the world.