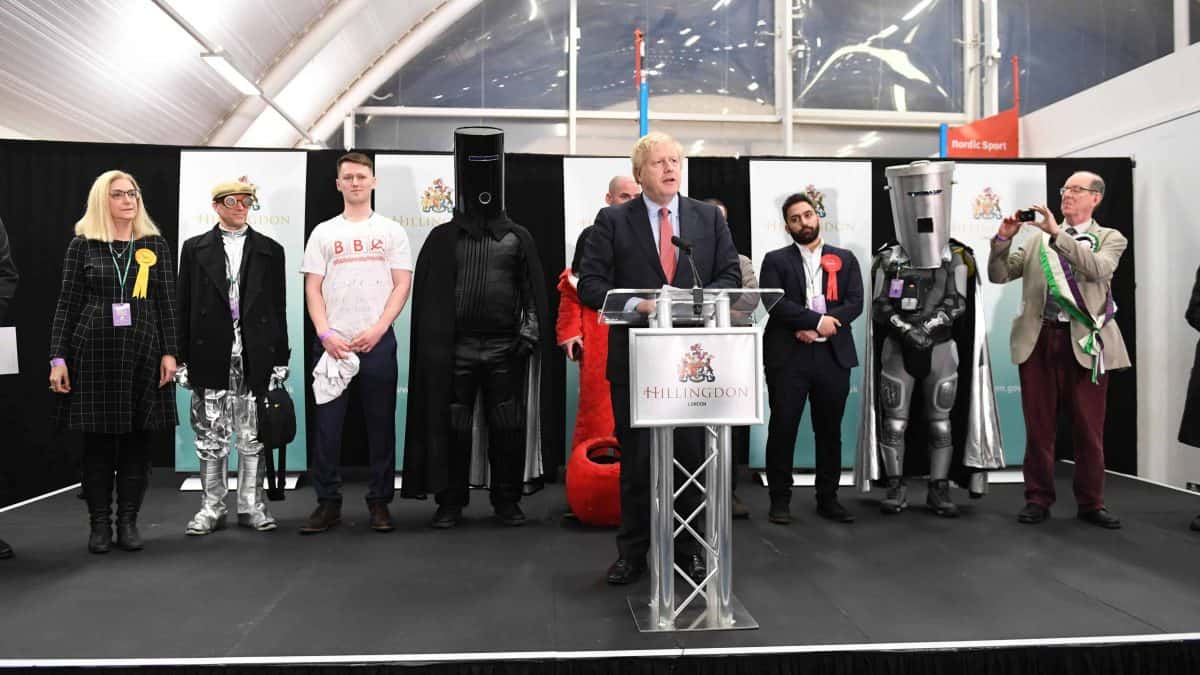 Boris Johnson strengthened his grip on his Commons seat on a night which saw the Tories make gains across the country.

The Prime Minister retained Uxbridge and South Ruislip after finishing 7,210 votes ahead of his Labour opponent, increasing his personal majority by more than 2,000 from 2017.

Mr Johnson was joined by his partner Carrie Symonds and their dog Dilyn at the Indoor Athletics Centre at Brunel University London, in Uxbridge.

Dilyn did not seem phased by the rowdy atmosphere as he was seen yawning minutes before the result was announced, despite being surrounded by photographers.

A scuffle had also taken place minutes before Mr Johnson arrived at the venue.

It came during a sombre speech from shadow chancellor John McDonnell as he retained his Hayes and Harlington seat against the backdrop of a bad night for Labour nationally.

A bin was knocked over in the media scrum as he moved through the venue.

Labour had been hoping to cause a shock upset by unseating the PM but it failed to materialise.

Mr Johnson appeared on stage where it was confirmed he had defeated Labour’s Ali Milani by 25,351 votes to 18,141.

The Liberal Democrats were a distant third while fringe candidates Count Binface and Lord Buckethead were well back.

In his acceptance speech, Mr Johnson said: “I don’t want to tempt fate because clearly lots of results are still coming in and we’re still only dealing with projections but at this stage it does look as though this one nation Conservative Government has been given a powerful new mandate – to get Brexit done.”

A man dressed as Ronald McDonald shouted “do it” and “no surrender, Boris” as Mr Johnson spoke about Brexit.

The Conservative Party leader went on: “And not just to get Brexit done, but to unite this country and to take it forward and to focus on the priorities of the British people, and above all, on the NHS.”

He repeated campaign slogans on nurses, GPs and hospitals before adding: “And I am grateful, I am grateful once again, to the people of Uxbridge and South Ruislip for returning me to serve you.

“It is an absolute privilege to do this job and to work for you.”

Mr Milani described it as a “disappointing result” for Labour, adding: “Change is coming, it’s just not coming today.”

Related: London: A Labour island in a sea of Tory seats