Johnson reportedly ignored official requests to don a mask at a packed performance of Macbeth on Tuesday night. 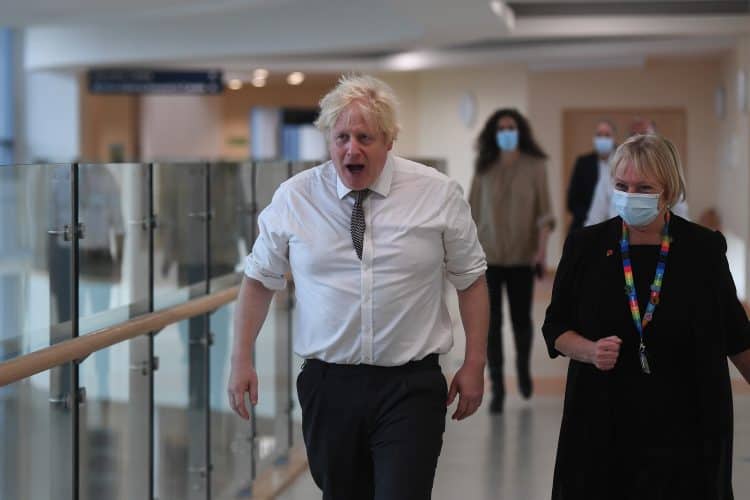 Boris Johnson again ignored official requests to wear a mask as he watched a performance of Macbeth at a busy London theatre on Tuesday night, it has emerged.

The prime minister was in the audience to see the Shakespearean tragedy at the Almeida theatre in Islington, after a scandal-hit fortnight in which backbench Tory MPs have accused him of losing the plot.

A fellow audience member told The Guardian that Johnson was not wearing a face covering during the performance – despite the theatre’s requests for visitors to wear one at all times when not eating or drinking.

He was also photographed inside a public area of the theatre without a mask on, alongside someone believed to be a member of his family.

Ticket-holders were reportedly emailed before the performance with a reminder “to wear a face covering at all times throughout the building unless you are exempt.”

The Almeida also has a message on its website asking all patrons to wear a mask in the theatre, including during the performance, to protect “all our staff, cast and other audience members from Covid”.

One eyewitness told The Guardian that most people in the theatre were complying with the rules, but the prime minister only slipped his mask back on at the end of the play as the lights went up.

A second witness said she had not seen Johnson wearing a mask in the first half, and while he was at the bar with his guest. The prime minister is believed to have had his mask round his chin before the interval, and completely off after it.

It comes after Johnson was previously criticised for not wearing. Mask while sitting next to 95-year-old David Attenborough at the Cop26 climate summit and while with medical staff at Hexham hospital.

He has since apologised over the hospital incident, although said it was for “barely 30 seconds”.

Meanwhile, Johnson was forced to defend his record in office as he faced questions about his leadership and political future at Prime Minister’s Questions.

The prime minister’s appearance in the Commons followed criticism from within his party in a series of hostile briefings since a chaotic speech at the Confederation of British Industry on Monday.

The chancellor sat next to Johnson in the Chamber as Sir Keir said: “The prime minister’s routine is falling flat. His chancellor is worried that people are getting wise, his backbenchers say it’s embarrassing… and senior people in Downing Street tell the BBC ‘it’s just not working’.”

Echoing the question asked by a journalist on Monday, Sir Keir said: “Is everything OK, prime minister?”

Johnson responded: “I’ll tell you what’s not working, it’s that line of attack.”