Northern Ireland bottlers are getting their carbon dioxide from EU and so have been saved from the C02 problem plaguing GB. 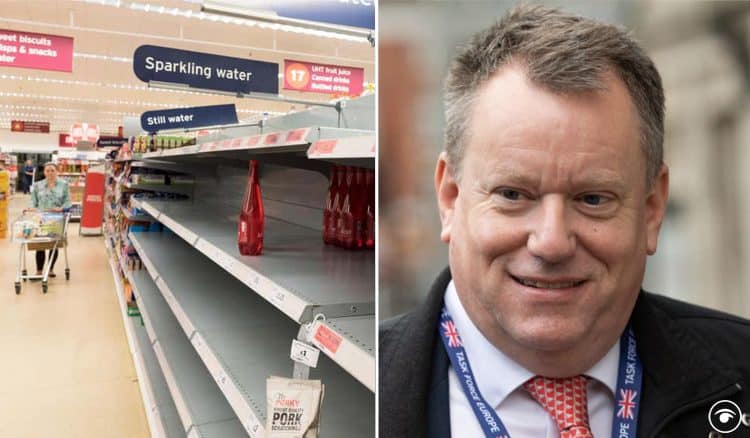 Leaks in David Frost’s deal with the European Union were put on show this week after Northern Ireland managed to escape a CO2 crises that engulfed the rest of the UK due to the Brexit minister’s Protocol.

Local drink manufacturers in the country moved to assure customers that they won’t run out of stock any time soon as the situation in mainland UK escalated.

Their confidence is in stark contrast to that of the British Soft Drinks Association, which claimed that UK manufacturers have “only a few days” of carbon dioxide left to produce fizzy drinks.

The association also warned that, due to Brexit, producers cannot import supplies of CO2 from the European Union.

But, thanks to Mr Frost’s deal with the EU that keeps Northern Ireland in the EU’s single market, such problems have not occurred across the Irish Sea.

Yesterday it was revealed that taxpayers will pay towards the operating costs of a major US-owned fertiliser manufacturer to ensure the supply of CO2 for the food sector continues amid the ongoing energy crisis.

It has been confirmed that a deal brokered by business secretary Kwasi Kwarteng will see the UK Government provide “limited financial support” towards CF Fertilisers’ running costs in order to prevent a food supply shortage at Britain’s supermarkets.

The agreement will be in place for three weeks while the “CO2 market adapts” to the surge in global gas prices, according to the Department for Business, Energy and Industrial Strategy (Beis).

Mr Kwarteng said the decision would avert “disruption” in the “many critical industries that rely on a stable supply” of carbon dioxide.

Spiralling energy costs have led to the suspension of operations at fertiliser plants which produce CO2 as a by-product, having a knock-on effect on the food industry particularly.

CF Fertilisers produces around 60 per cent of UK’s CO2, used primarily by the food sector but also in the health and nuclear industries, but suspended operations at its Teesside and Cheshire plants because of high global gas costs.

Beis officials said the “exceptional short-term arrangement” with the American business would allow the company to immediately restart operations and produce CO2 at its Billingham plant in Teesside.

There had been fears that without action, the UK could face shortages on supermarket shelves.