“We, sadly, have elected a Prime Minister who has no moral compass whatsoever.” 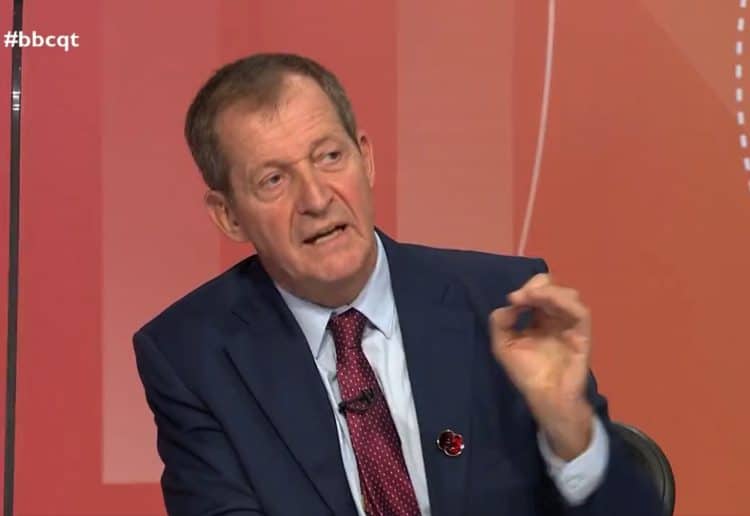 Alastair Campbell accused the prime minister of being a serial “liar” with “no moral compass whatsoever” during an explosive appearance on Question Time last night.

The former Labour communications chief laid into the prime minister as “sleaze” allegations against his government pile up.

A row over second jobs has exploded in the wake of the controversy about Owen Paterson being found to have broken the centuries-old ban on paid lobbying by MPs.

On Question Time, Campbell was responding to comments made by the Tory MP Lee Rowley, and said he found Johnson’s comments “humiliating for Britain”.

He highlighted a video by activist Peter Stefanovic, who appeared on ITV’s Good Morning Britain show when Campbell co-hosted some episodes in the summer.

Campbell accused the prime minster of “breaking” the ministerial code by “lying” in the House of Commons.

He said: “So if the prime minister consistently, regularly breaks the ministerial code, why shouldn’t other ministers think they can do exactly the same and get away with it?

“As Priti Patel has done, as Michael Gove has done, as Matt Hancock did until he got caught doing something not to do with his public duties.

“So I really think we have just got to face up to the fact we, sadly in my view, have elected a prime minister who has no moral compass whatsoever.

“I speak as somebody who has known him probably for longer than anybody else on this panel and I honestly believe unless and until the Conservative Party face up to the fact he is not, as Keir Starmer said, a trivial man, he is actually a bad man, and until people face up to that; this country’s politics is going to be damaged possibly beyond repair.”

Fellow panellist Tom Newton-Dunn, of Times Radio, claimed the issue was “cross-party” and pointed to Keir Starmer’s legal consultancy work soon after his election as an MP.