These are the top 10 MPs who have earned, or will earn, the most from outside work in 2021. 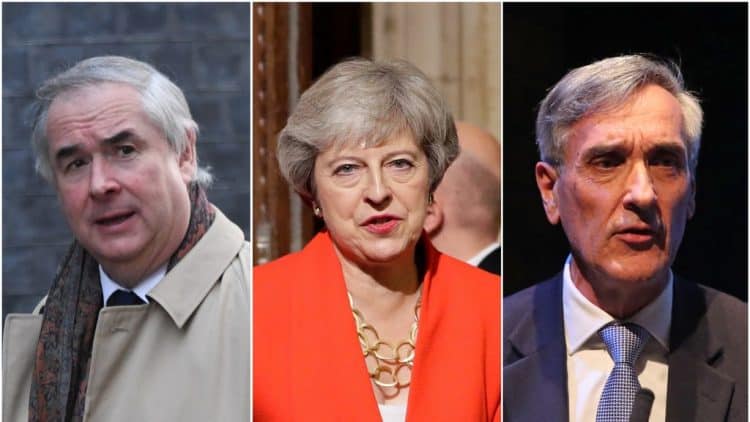 More than a quarter of Tory MPs have second jobs with firms outside their day-to-day MP work, making more than £4 million in extra earnings in a year, analysis has found.

The register of MPs’ interests shows that more than 90 out of 360 Tories have extra jobs on top of their work in parliament, compared with three from Labour.

They are overwhelmingly older and 86 per cent are men. The highest earners were all former cabinet ministers.

The PA news agency has analysed the figures provided in the most recent publication of the register of financial interests for MPs.

The analysis only includes payments that have been received – or are expected to be received – in 2021, although in some cases work was carried out in 2020.

In cases where positions have started or ended part way through the year, the figure has been calculated pro-rata.

Sir Geoffrey’s outside earnings were set to be the highest in 2021, gained as a practising barrister. His entry on the register notes that 13.5% of what he receives goes towards costs for his chambers.

This year, he received payments for legal work for Khan Partnership Solicitors totalling £49,154.17 for around 51 hours of work, and from Fidlaw, a business law firm, he was paid £14,999.67 for around 14 hours of work.

In the most recent update he declared he would be receiving an annual salary from November 1 2021 of £400,000 from Withers, the international law firm representing the British Virgin Islands in an inquiry into corruption – around £66,666 would cover this year and he would be working for them for 41 hours a month.

Via the Office of Theresa May Ltd, the former Prime Minister receives an annual salary of £85,000 for speaking engagements, totalling around 24 hours a month.

Additional payments came via talks given to organisations in the United States of America, through the Washington Speakers Bureau.

On the register she says: “These sums are used to pay employees, maintain my ongoing involvement in public life and support my charitable work.”

From October 1, Sir John Redwood has taken home as chairman of the Investment Committee of Charles Stanley, £48,222 per quarter. The register said: “My duties are to write a twice-weekly market review and investment report, to chair the investment committee and to make oral and written presentations.”

Sir John also received a £35,000 bonus payment this year from the firm, receives £5,000 a year as a member of the advisory board of EPIC Private Equity, plus declared £439.86 in book royalties.

The largest payments on Ms Bruce’s declaration as listed as “to meet tax liability”.

However, the practising lawyer has also registered £35,000 in total this year via her own firm, Fiona Bruce and Co LLP.

Former whip and minister Mr Mitchell is listed as a senior adviser for a number of firms.

He provides “general business advice” to investment manager Arch Emerging Partners Ltd at a cost of £15,000 for two days work a year, plus commission for introducing new business.

And he is a senior adviser on African matters to SouthBridge, an investment bank, for which he is paid £39,600 for nine days of work.

Mr Mitchell is a senior adviser to the private equity and venture capital firm Kingsley Capital Partners for eight days a year, and received £50,000 for the year to March 2, 2021, with the job in place until further notice.

He also received £200 for a talk for students interested in international development, and received £956.12 in a book advance.

Until June this year the Health Secretary was being paid £150,000 a year as an adviser to JP Morgan, taking between 80 to 96 hours per year, plus another £151,835 as an adviser to an enterprise AI software provider.

Both these roles came to an end when he became Health Secretary.

Mr Javid is also expecting £20,000 for an online speech to the clients of investment firm Muzinich & Co.

Sir John makes most of his extra income as a strategic adviser to an international energy company, BB Energy, where he receives £50,000 a year for between 80 and 90 hours of work.

He also receives £38,000 as a part-time professor in political studies at the University of Bolton, which takes up between 20 and 30 hour a month of his time.

And Sir John is paid £30,000 a year as the President of HBSA, which provides technical and vocational education.

He has also registered £1,350 worth of fees for articles written for the Sunday Express, with another £350 expected, but the register notes all of these have been given to charity.

Mr Fuller will receive £30,000 this year for four hours a month of work for as chairman of OpSec Security.

As an advisory director of Investcorp Securities Ltd he receives £20,000 a year for two hours a month work, and received an extra £29,900 for an additional 19 hours of business planning advice.

Former banker Mr Garnier is set to receive £60,000 this year as a member of the advisory board of Laser Light Communications, a US-based start-up satellite company developing data connectivity through lasers.

He will earn an extra £30,000 as chair of the advisory board of the Shetland Space Centre, which will take up 10 hours a month.

And he is also paid £10,000 a year as principal speaker for BRI Wealth Management plc, for a commitment of 64 hours a year “speaking at eight client events and writing occasional articles for client newsletters”.

Mr Garnier is also expecting a £300 payment for an article written for the Sunday Sun online written last year.

As a strategic adviser to Hutchison Ports Europe, former minister Mr Grayling is paid £100,000 a year for seven hours of work a week.