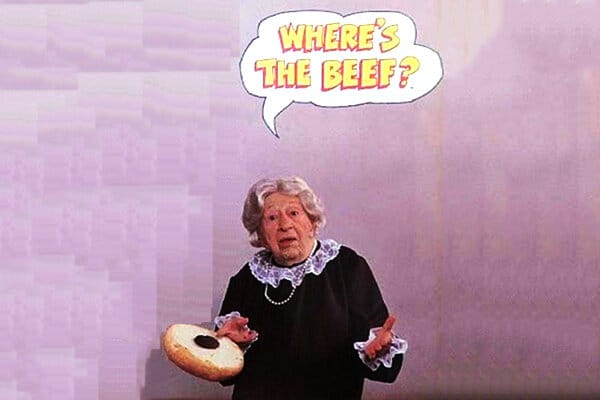 Launched by one hamburger chain to disparage a competitor, the slogan entered politics 40 years ago when one US presidential candidate said the policy proposals of a rival were unsubstantial and thin on beef.

A current use for the slogan? When we compare two competing projects of our era as to what are the best ways to knock back the reactionary Conservative Party at the next general election and beyond, it is clear one project has substance and permanency – in other words, “beef” – while the other one is merely a set of Post-It note scribblings.

Let’s call them Project A and Project B. The goal of Project A is to win an equitable proportional representation (PR) voting system which would mean that seats won at Westminster would match votes cast.

To achieve that target, some type of “progressive alliance” (I prefer the term “electoral pact”) will need to be built among all left-of-Tory parties. Reducing competition among such parties — for example, by running paper candidates or “stepping back” from all-out campaigning and tactical voting — are proposed tactics.

Neal Lawson of Compass laid out the basics of Project A in a recent article titled: “North Shropshire proves progressive parties must work together to beat the Tories: The electoral maths are crystal clear – only cooperation between Labour, the Lib Dems and the Greens will oust this government.”

As well as requiring compromise and political co-operation in spades,    Project A opens up the possibility of the long-term and substantive political change that proportional representation would usher in. (This is, not surprisingly, why the Tories as a party hate PR with such a passion.)

Tactical voting alone is the answer

Those supporting the alternative, Project B, say that tactical voting alone is the answer and also cite, as models, two 2021 Lib Dems by-election victories in once seemingly impregnable Tory strongly constituencies.

Commenting on the North Shropshire win of 16th December, deputy LibDem leader Daisy Cooper wrote that “It makes perfect sense for opposition parties to put their resources into beating the Tories wherever they think they have the best chance of winning”, adding that LibDems “have a unique ability to reach across political divides in a way no other party can.” Tactical voting alone will do the trick in the next election, Cooper thinks.

Meanwhile, Labour’s Keir Starmer was fuzzy on his party’s plans. He told interviewers over the holidays his party would focus in the places “where we can win and we know we have to win.” Some kind of informal “deals” were implied.

What’s missing from Project B of both Cooper and Starmer? There is no mention whatsoever of electoral reform as the necessary and essential glue of left-of-Tory forces. Hence the question: Where’s the beef?

Project B reflects classic short-termism. Yes, tactical voting might have the potential to knock off the Tories in the next general election. But it is a mere temporary measure, an exercise in treading water. It does nothing to tear down the structural inequality that lies at the heart of our antiquated voting system.

Let’s be upfront: first-past-the-post (FPTP) is all about creating and maintaining an electoral duopoly. As long as our crumbling and deeply unfair voting system remains then, sooner or later, another minority party — whether Labour on a mere 35 per cent of the total vote in 2005 or the Tories on 37 per cent in the 2015 general election — will sweep into power with a majority of seats and hold 100 per cent of the power.

And we will keep on feeling the pain of almost 300 safe seats, millions of wasted votes, and electoral dictatorship.

Under PR, by comparison, the electoral system is radically different. There are no safe seats. Every vote counts. Elections really are competitive. And the number of seats won in Parliament is roughly proportional to the overall vote total.

We would do well to remember the words of former Labour foreign secretary and electoral reformer Robin Cook. In a pamphlet written nearly 40 years ago, Cook reminded us:

“I am not prepared to put up with a system which once every generation, every 30 years, gives us an opportunity to get in with a majority the way the Conservatives do and govern the same way. It is not we who pay the penalty, but the people we represent. When we win, let us seize the opportunity to change the electoral system so we do not have ever again to return to elective dictatorship of the kind we have experienced.”

And that surely is the point. A loss by the Tories could indeed provide exactly the opportunity needed to bring in PR and FOREVER wipe out the scourge of tactical voting and all other negative features of FPTP.

Henceforth, we could vote for whomever we want – and our votes would actually count – and never again would we have to vote for the party we‘ve been told had the best chance of beating the party we hate most. That’s not democracy, that’s more like how a roulette wheel functions.

Moreover, a written commitment to implement PR would make it more difficult for Labour, likely to be the largest left-of-Tory party in the next Parliament, to pull off of a repeat of the 1997 election: promise electoral reform on the campaign trail and then welch on the obligation once elected.

We’ve had enough of treading water

PR is LibDem policy. At the last Labour conference in Sept. 2021, 79 per cent of the delegates voted for PR to be Labour policy. For the LibDems, endorsing PR must be the non-negotiable centre piece of any and all electoral deals with Labour.

So let’s embrace Project A. Put some beef — namely proportional representation — at the centre of all efforts to unseat this deeply unpopular and deeply unpleasant Tory government. We’ve had enough of treading water.

Alan Story is co-founder of the cross-party/ no party campaign group GET PR DONE!