How is it that politicians can be caught out making serial mis-statements and still end up in charge? 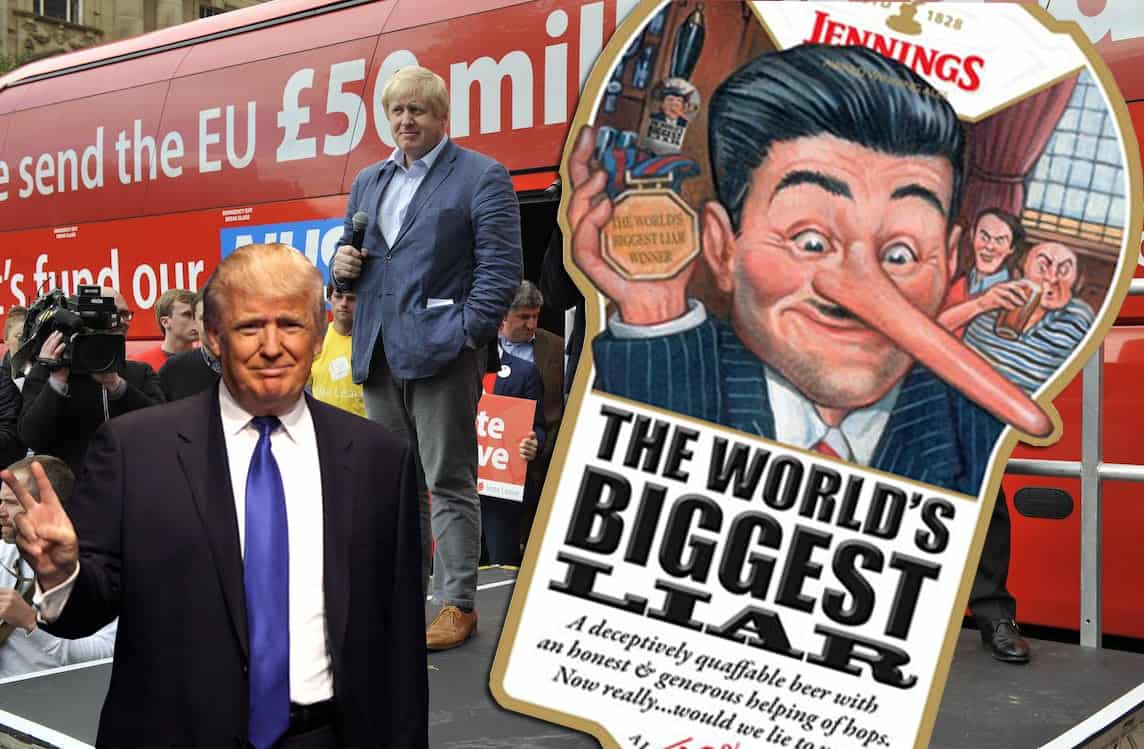 I spent a year of my life on one lie. I was the BBC’s America editor and the lie was: “I did not have sexual relations with that woman, Miss Lewinsky.” The liar was President Bill Clinton and those eleven words almost cost Clinton the presidency. He was impeached and his reputation damaged. Tony Blair’s reasons for going to war with Iraq are still held up as lies, and his reputation too has not recovered.

Fast forward a few years to now. The current President of the United States tells so many lies that The Washington Post publishes a tally every three months. The last count in early April said that by Trump’s 1,170th day in office, the Leader of the Free World had made 18,000 “false or misleading claims.” Recently his porkies productivity has been improving. In the early days of his presidency Trump was turning out a mere 13 lies a day but in the last couple of months the falsehood-rate of the workaholic in the White House has hit 23 a day – almost one an hour. In the coronavirus category alone Trump is currently at 350 misleading statements.

This is Olympic gold standard b***s**t.

The New York Times columnist Charles Blow explained America’s dilemma: “Donald Trump lies all the time. We know that. Some of us are incensed and disgusted by this. Others have been worn out by it. But, few even attempt to deny or excuse it anymore. It has simply become a recognised feature of the man — and a predicament for the country.”

Does the impossibility of sifting fact from convenient political fiction sound a bit like Britain too? At the start of our coronavirus outbreak a government adviser talked about “cocooning” vulnerable people so “herd immunity’s been achieved in the rest of the population.” A couple of days later we were told by the Health Secretary Matt Hancock quite the opposite. Apparently “we have a plan” based on scientific advice but “herd immunity is not a part of it.” They can’t both have been right, can they?

Our most famous “false or misleading claim” in recent years was the Brexit bus lie that we pay £350 million a week to the European Union. This claim dismissed by Sir David Norgrove of the UK Statistics Authority as “a clear misuse of official statistics.” The man in the bus, Boris Johnson, still has never corrected that claim and, like Donald Trump, he has a track record in the less-than-completely-honest department. He was fired by The Times newspaper for making up quotes and effectively dismissed for being “economical with the truth” when Michael Howard was Tory leader. His “do or die” Brexit deadline, his lying down in front of Heathrow bulldozers and building various bridges over the Thames and elsewhere plus airports on the sea have all been more evident in the bluster than in the achievement. But perhaps complaining about the normalisation of lying in public life is like a sailor complaining about the sea. We just have to get through it.

There is, after all, the World’s Biggest Liar competition every November in a pub in Cumbria. The pub bans politicians from taking part on the grounds that they get too much practice. And yet I remain one of those weird people who think lying in a public house is a laugh, but isn’t so funny in public life. If your doctor, dentist of children’s schoolteacher lied to you, they would lose professional credibility and probably their job. The boss of Volkswagen resigned after the company lied about diesel emissions. So how is it that a politician can be caught out making not a few but in Trump’s case a few thousand serial mis-statements and still end up president?

In the 19th century a British Colonial Office statesman Sir Henry Taylor wrote that “falsehood ceases to be falsehood when it is understood on all sides that the truth is not expected to be spoken.” Maybe we just don’t expect truth any more, although  you – you don’t lie, do you? I mean, when you buy something online and the little box pops up and you have to tick saying you have read the terms and conditions, you (like me) have always read those 30,000 words of legal garbage…  haven’t you?

Click Here to purchase his book Brexit Without The Bullshit