By Steve Banks The Daily Mail is underplaying the support it gave to Oswald Mosley, the leader of the British Union of Fascists in the early 1930s. In a recent smear on his son Max Mosley, one of paper’s heavy-hitters Richard Pendlebury wrote: “For a brief period some of the mainstream press — this paper […] 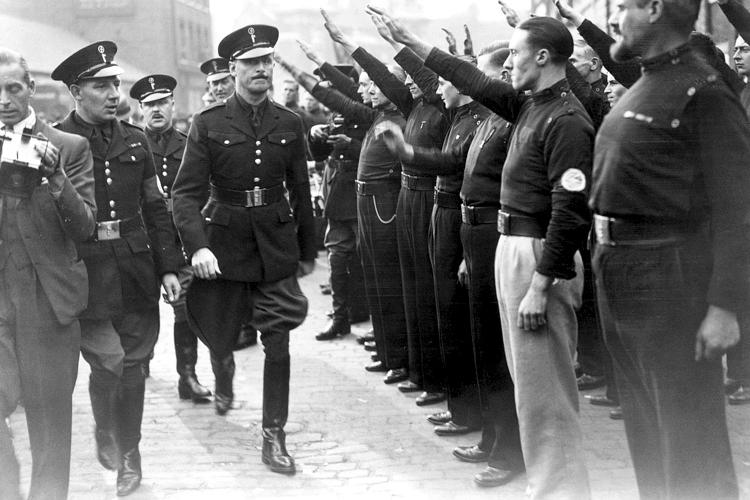 The Daily Mail is underplaying the support it gave to Oswald Mosley, the leader of the British Union of Fascists in the early 1930s.

In a recent smear on his son Max Mosley, one of paper’s heavy-hitters Richard Pendlebury wrote: “For a brief period some of the mainstream press — this paper and the Daily Mirror included — praised the BUF’s supposedly ‘conservative’ agenda.

“That support soon evaporated as violence and an intolerance that was very evidently ‘un-British’ became synonymous with the movement.”

The bizarre attack on Max Mosley – the third spread Pendlebury has penned about him this year – was motivated by the former Formula One bosses’ support for Impress, the new press regulatory body.

Pendlebury did not mention that the pre-war owner of the Daily Mail, Harold Sidney Harmsworth, 1st Viscount Rothermere, was so excited by the BUF that he personally wrote a full-page editorial headlined ‘ ‘Hurrah for the Blackshirts’ in January 1934. The story, bylined to Viscount Rothermere, praised Mosley for his “sound, common sense, Conservative doctrine”, and pointed out that: “Young men may join the British Union of Fascists by writing to the Headquarters, King’s Road, Chelsea, London, S.W.”

For a full six months, the Daily Mail was overtly sympathetic to the Black Shirts until a rally at the Kensington Olympia, in the summer of 1934.

However, the Daily Mail did not drop its support for Mosley’s BUF wholly because of their ‘violence’ and ‘intolerance,’ as Pendlebury claims.

Rothermere – whose dynasty still own the news group – told Adolf Hitler himself that real reason was because Jewish advertisers in the UK threatened to pull the plug on his paper.

It is not often that news stories rely on the testimony of Hitler to back-up facts. But in this case, the Fuhrer’s words are compelling indeed. The book is an account of the Reich Chancellor’s private conversations that were recorded, some in short-hand, by his official aides at dinner parties and social gatherings.

The two-hour monologues were noted for posterity by Nazi lawyer Henrich Heim, stenographer Henry Picker and the Fuhrer’s private secretary Martin Bormann – and are generally considered credible and accurate.

The book is translated by Norman Cameron and R.H. Stevens and introduced by H.R. Tre-vor-Roper, then considered the leading Second World War historian in Britain.

Here are the extracts that reveal Hitler’s private communications with Rothermere.

On 6th May 1942, Hitler said: “Lord Rothermere, who at the time had just published two articles in support of the Mosley movement, himself described to me at the Berghof how the Jews went to work, and how it was quite impossible at short notice to take any effective counter-measures. It has been from the beginning one of my most potent sources of strength that I made all the newspapers of the NSDAP, unlike all the other newspapers of similar importance, completely independent of the Jewish advertising agencies and thus impervious to economic pressure of this nature.”

On 31 August 1942, he added: “To counteract Rothermere, the Jews cut off his complete revenue from advertising, and it was Rothermere himself who told me the story of how he was compelled to toe the line. Any and every nation which fails to exterminate the Jews in its midst will sooner or later finish by being itself devoured by them.’ Hitler added: “In his letter Rothermere said he would gladly use his Press to further a rapprochement be-tween Britain and Germany. We subsequently exchanged a series of letters, one of which was very important. I had written to Rothermere to say that I had no grounds for hostility towards Italy, and that I considered Mussolini to be an outstanding personality; that if the British thought they could ride roughshod over a man like Mussolini, they were greatly mistaken; that he was the incarnation of the spirit of the Italian people (in those days I still had illusions about the Italians); that attempts to strangle Italy were futile; and that Italy, as Germany had done before her, would look after herself; and finally, that Germany could be no party to any action directed against Italy or Italian interests.

“Thereupon Rothermere came over to see me, and the Princess accompanied him. I must admit I prefer a friendly little kitchen wench to a politically minded lady! Nevertheless, the fact re-mains—the attitude of the Daily Mail at the time of our re-occupation of the Rhineland was of great assistance to us, as it was also over the question of our naval programme. All the British of the Beaverbrook-Rothermere circle came to me and said: “In the last war we were on the wrong side.” Rothermere told me that he and Beaverbrook were in complete agreement that never again should there be war between Britain and Germany.

“Later, the Princess sought, by means of a court case, to make use of this correspondence to her own advantage. She had taken photostat copies of all the letters, and sought permission of the court to publish them. The judge—and this shows that, in spite of everything, judges are decent people—said that he had read all the letters, which reflected great credit on both correspond-ents concerned, but that he could not see that this was a good reason for their publication.” The judge did not cast doubt on the authenticity of the letters or question the believeablity of their contents.

Though there has been controversy surrounding some of the translations in Hitler’s Table Talk, the information is considered reliable by historians and our investigation could find no evidence that the passages on Rothermere have been challenged.

As Hitler correctly pointed out, Rothermere distanced himself from the BUF. But the press baron was not so quick in dropping his support for Hitler himself.

Rothermere continued suck-up to the Great Liberator for a further FIVE years. He sent a series of supportive and congratulatory telegrams to the man known as ‘The Boss’ to his inner circle and various Nazi Germany’s leaders. The multi-millionaire businessman visited Hitler in person and posed for photographs. It is unclear whether Rothermere greeted the Fuhrer with a Nazi salute.

Just weeks before war broke out in 1939, he wrote to Hitler: ‘My Dear Führer, I have watched with understanding and interest the progress of your great and superhuman work in regenerating your country.’

Historians have also discovered that Rothermere continued to praise Hitler in private until 1941/42.