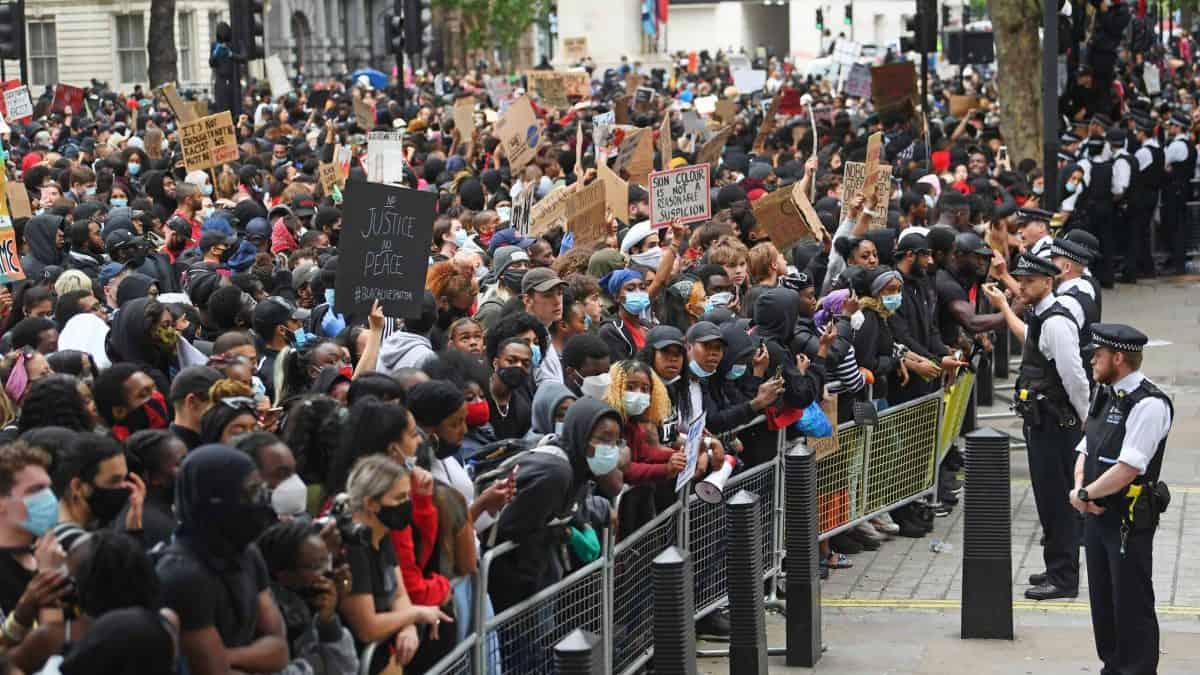 Such is the nature of policing that, as officers marshalled protestors in one part of London out campaigning against police brutality, just a few miles away in Harlesden another unit was out saving lives by rushing on ‘blues and twos’  to the scene of a horrendous crime involving the gang-related shooting of a two year old child and three adults.

As with all calls to stabbings and shootings police will frequently not know whether they will be confronted by an individual wielding a knife or a gun or engaged in rendering life-saving first aid. In London, the likelihood is, as determined by the Mayor’s office and Met stats, that the victims of such attacks will disproportionally be black.

In Liverpool, to name but one British City, such victims will be white; in other parts of the country Asian. The common link; demographics and socio-economic conditions

There can be few persons in the UK who would not have seen the dreadful footage which showed the tragic death of George Floyd during a police arrest. On police social media here in the UK the reaction, as soon as the footage emerged, was one of shock, disbelief, anger and sadness.

As the understandable furore broke in the USA, concerns that contentious issues would be transposed to the UK proved accurate. Diane Abbott led the way with an article in the Huffington Post and soon police across the US and the UK became aware that many would hold the view that all officers were collectively responsible for any controversial death involving police.

In the UK, as riots were taking place in the USA, not only were previous deaths in police custody being quoted but the issue of stop and search became prominent, as indeed it frequently does. Abbott quoted the figure of 1,741 individuals who had died in police custody over the past 30 years. Deaths in custody include police contact and frequently involve circumstances over which police have little control; a heart attack 24 hours after being released is but one example. She points out that a disproportionate number of the deceased were black.

Indeed, the issue of disproportionality features in the most recent set of figures for England and Wales, yet when viewed over a year, don’t seem quite so alarming although any death in these circumstances is, in itself, a tragedy.

Familiar names of those who died in police ‘custody’ were again to be seen at protests and on social media. The fact that these can stretch back as far as 35 years doesn’t of course extinguish the flame of outrage felt by relatives and supporters.

It is probably of no consolation that from each death, lessons are learnt. Just a few months ago I assisted the British Transport Police with an arrest at Waterloo Station. The man, who was black, was taken to the floor face first. He was struggling and cursing and anyone with a mobile phone could perhaps have been forgiven for filming that which they assumed would be another example of racist policing.

However, during the very short period he was face down, two words kept repeating themselves in my head; positional asphyxiation. I had never heard of this threat to the safety of prisoners until relatively late in my career yet deaths caused by restraining those face down resulting in them being unable to breathe caused a tidal wave of awareness and a change of procedures.

The male, referred to above was, incidentally in possession of stolen goods, cannabis and a knife and had been originally detained by a security guard who was also black.

Since 1990, there have been on average around a million arrests a year; each arrest is an exercise of force and of course there will be other cases where police have had to use restraint without a formal arrest such as when an individual with mental health issues is taken directly to hospital or when police are called to a hospital where a patient is being disruptive. Despite the fact that each death is a catastrophe this needs to be seen against the simple reality that policing can be an extremely violent occupation. 1,741 deaths set against 30,000,000 arrests over 30 years is too many but there have been improvements over the years as lessons have been learnt and procedures tightened.

Quite how pressure on George Floyd’s windpipe ever became an approved restraint technique in the states can only be wondered at.

“Over-policing” and “hands in pockets.”

Black Lives Matter will say that the black community suffer more than any other from police ‘harassment’ and ‘over-policing.’ However, is that the fault of police, or successive generations of politicians who have failed to deal with the socio-economic inequalities such as education, employment opportunities, health care and housing? As police will only be too well aware, areas of London and elsewhere that are impacted by these issues will tend to be ‘high crime’ and it is the police who will have to paper over the cracks.

Those officers policing such areas accept their lot but feel that from within the community they are subjected to constant criticism, rarely praise. Each knife or firearm taken off the streets, frequently by stop and search, is regarded as a potential ‘life-saver’ by the officers involved.

Yet there is no praise but criticism, some justified, such as when a stop and search is poorly executed as we have seen recently on social media. Surely, officers would argue, negative or ‘over-frequent’ stop and search is preferable to dead or permanently disabled individuals.

I always say….. where would you rather a cop had has hands? In your sons pockets, or in his chest cavity?