This week the Undercover Policing Inquiry finally releases the cover name used by the most notorious of the police spies that infiltrated anti-racist organisations during the explosion of anger sparked by the murder of Stephen Lawrence, and at the time of the subsequent Stephen Lawrence Inquiry. This officer, referred to as N81 and part of […] 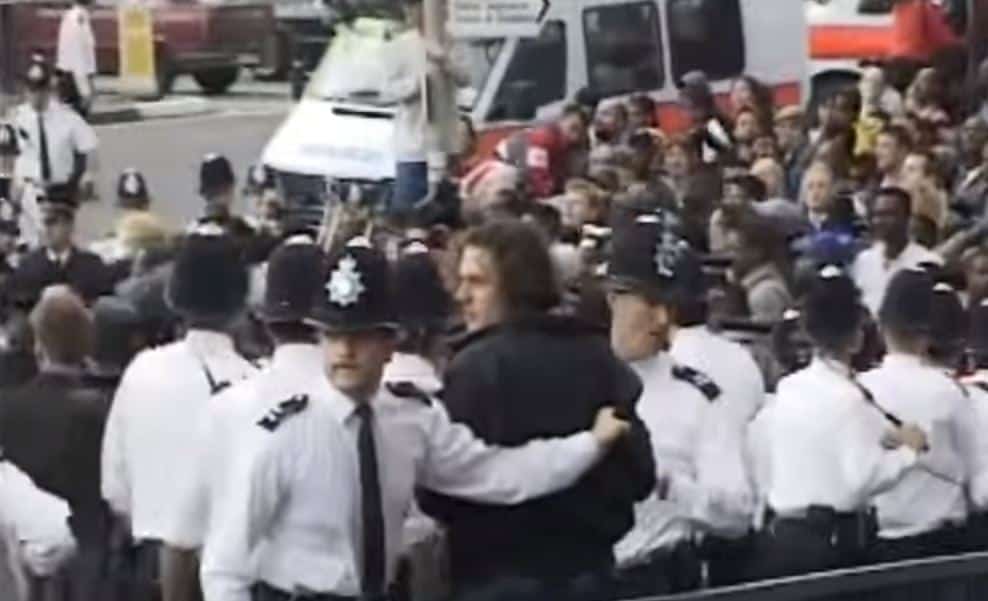 This week the Undercover Policing Inquiry finally releases the cover name used by the most notorious of the police spies that infiltrated anti-racist organisations during the explosion of anger sparked by the murder of Stephen Lawrence, and at the time of the subsequent Stephen Lawrence Inquiry.

This officer, referred to as N81 and part of the Special Demonstration Squad (SDS) operated under the name of ‘Dave Hagan.’

Movement for Justice (MFJ) was one of the organisations he was sent to infiltrate.

For us, his partial exposure serves as a reminder of the fears of our enemies, and that racism is increasingly the most important tool of the rich and powerful.

The activities of ‘Hagan’ and the SDS can’t be treated and ‘apologised’ for as part of a sad history – any more than the detention, deportation and attempted deportation of black British people of the Windrush generation can be apologised for as ‘mistakes’ – as in Theresa May and Amber Rudd’s forced ‘apologies’ this week.

Both sorry affairs shed a light on the brutal racism that still lies at the heat of the British state, on its ruthless cynicism and duplicity, and its fear of the struggles of the black, Asian, Muslim and immigrant communities for justice and equality.

These have been the most dynamic and powerful struggles of the exploited and oppressed over the last four decades, and therefore the biggest threat to our oppressors.

It has always been and remains quite clear to black and Asian people that racism is a constant part of day-to-day life in Britain: in the workplace, in the targeting of black youth by police, in the violent deaths of black people at the hands of the police, in the constantly expanding, racially-defined anti-immigrant laws.

What is being exposed now, before a much wider audience, is the obsession of the state with trying to sabotage every justice campaign and anti-racist organisation that shines a light on police and state racism.

Stephen Lawrence was murdered by a racist gang in Eltham, south-east London twenty-five years ago this month.

His murder was a massive flashpoint for action by the black community and for youth in the fight against racist attacks AND against police racism and cover-up.

It became the most famous case to highlight both those expressions of white racism, and the links between them.

It followed a series of racist murders and attacks of which the most high-profile were the murders of Rolan Adams in Thamesmead and Rohit Dougal in Erith, and the savage attacks on Quddus Ali and Mukhtar Ahmed in Tower Hamlets – areas targeted by the fascist BNP at the time.

A few weeks after Stephen’s murder tens of thousands of youth joined an angry, militant demonstration, called by Youth Against Racism in Europe (YRE), that marched on the BNP head-quarters in Welling. In the following autumn a 60,000-strong national demonstration confronted the police in Welling.

From the start, the people involved in the struggle were the targets of police frame-ups most notoriously – that of Duwayne Brooks, Stephen’s friend and a victim of the same brutal attack in which he was murdered. And also of infiltration by police spies and agents provocateurs.

When four years later, in 1997, the newly elected Labour Government announced a public inquiry into the Stephen’s murder, which began its public hearings the following year, the police campaign of obstruction, stitch-ups, framing and infiltration went into overdrive.

It was during that period that ‘Dave Hagan’ became involved in MFJ, disappearing a couple of years later. Though we were not aware of his role then, our evidence before the Stephen Lawrence Inquiry at the time perfectly summed up the police motivation for his infiltration.

This is an extract from our testimony to the Stephen Lawrence Inquiry:

“…the police would not publicly acknowledge the racist nature of Stephen Lawrence’s murder because they see racism as a ‘public order’ issue, as shown by their concern about the two massive anti-racist demonstrations in the area in the six months following the murder. That is to say, they see black and Asian people, and their response to racism, as the main public order ‘problem’.”

During the Lawrence Inquiry, on the first of two days when the five racist gang members who killed Stephen Lawrence were forced to give evidence, MFJ called and led a demonstration that reversed an attempt to reduce public access.

An overflow room with video link was opened, and by day two more people came to watch every word.

When the racists finally left they were subjected to an angry reception by many hundreds of mainly black youth fighting for justice.

It was a crucial turning point in that inquiry.

Several years after the Inquiry, Peter Francis publicly exposed the role of the SDS, of which he had been part.

Francis had briefly been an undercover officer in the Kingsway College Anti-Fascist Group (a forerunner of the MFJ) at the time of the second Welling demonstration, and was then moved to infiltrate Militant Labour (now the Socialist Party) the organisation that established the YRE.

While his speaking out began the systematic exposure of the operations of the SDS that led to the present Undercover Policing Inquiry, it has been the tireless determination of all the individuals and groups spied upon who have relentlessly held the police to account and demanded an end to the cover up.

MFJ bases itself on the real, historic importance of the struggle against racism in Britain, on its inspiring character for new generations of youth, and on the social power of black, Asian, Muslim and immigrant communities.

Peter Francis, ‘Dave Hagan,’ and various other provocateurs we have dealt with since then have not been capable of diminishing that fight.

By Antonia Bright, Movement For Justice.