A TFL public consultation that includes proposals to “compulsory purchase” a retail trade park in New Cross Gate in south east London has mobilised a community into to action, lead by the political party Lewisham People Before Profit. Marie Duggard, a local resident and activist in PB4P, says that the consultation fails to address the […]

A TFL public consultation that includes proposals to “compulsory purchase” a retail trade park in New Cross Gate in south east London has mobilised a community into to action, lead by the political party Lewisham People Before Profit.

Marie Duggard, a local resident and activist in PB4P, says that the consultation fails to address the huge numbers of crucial local jobs the wider community would lose and its devastating consequence on the entire community, highlighting the 239 jobs alone at Sainsbury’s and the huge importance of the store which has raised £1.2 million for local good causes.

Marie points to the fact that this retail park is the largest employer in the area with a further 111 jobs at the adjoining local stores and the small local shops attached to New Cross Gate station that have been run by the same owners for decades whose future looks bleak as any new retail commercial space is certain to be only within the price band of the giant corporate brands.

Barbara Raymond, another local resident and long term PB4P activist, states she is worried about the impact the loss of such huge number of jobs will have on the area. Barbara believes women especially need these jobs that offer flexible hours and job security to keep families together in an area already hit by some of the highest poverty statistics in the country. Are we really saying we would rather put hundreds of families on benefits just because this site is cheaper to develop than the other side of the track?

A spokesman for TFL said: “As part of our planning process we look to minimise the impact on the local community as much as we can. While there would be some impact on a small number of business premises this is only expected in the short term during construction, with the potential for increased employment opportunities following the redevelopment of the sites.”

But Marie says although the construction will create a huge number of building jobs for the period of the Bakerloo lines construction if the stores are allowed to be demolished history has shown you will end up with a couple of high-end coffee shops and a metro store staffed by scanning machines and robots and a security guard. Losing these stores and shops and the crucial jobs they create will devastate the area for decades.

Barbara Raymond agrees and at 80 years young she has seen it all before. She is urging people to write into the Bakerloo consultation before the deadline of 21 of April and oppose the compulsory purchase of the stores and move the planned shaft and station to the other side of the track which presently has a large vacant piece of land with the same foot print as the retail park.

“We are not against the idea of another train station” says Barbara, “but these jobs must be protected when there is a clear alternative”. 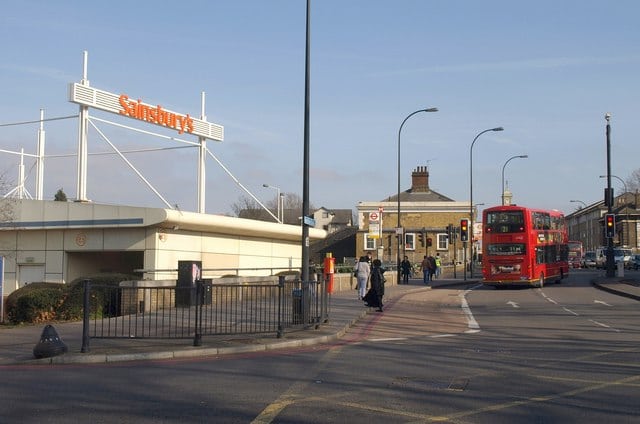 Having spent a few days on the retail park we could not find a single worker or store that had been made aware of the consultation, how can it be that a project that will direct effect so many has failed at the most basic level to engage and inform those whose future is directly impacted?

Whilst writing this article I also could not find a single store or worker who was aware of this public consultation and its impact. A Sainsbury’s spokesperson said: “Our New Cross store has been trading for over 20 years. It is an extremely popular store and we want to continue investing in its future and that of the local area.

“We’re working with Mount Anvil and Hyde Housing to regenerate the site. Our plans will provide customers with greater shopping choice, deliver a significant number of new homes and jobs and act as a springboard for further investment and development in the local area.”

Like every store and local small trader I spoke with, if TFL go ahead with the compulsory purchase of this site it would impact on the stores future.

The current public consultation closes on 21 April 2017, a number of site options have been considered and are detailed in the Background to Consultation report.