By Ariel Moshe, co-founder of Jewish Voice UK Yesterday, on the 26th March 2018, people gathered in London’s Parliament Square under the #EnoughIsEnough tagline. The gathering was in protest at the Labour party’s perceived anti-Semitism problem. The protest was called for jointly by the Board of Deputies of British Jews and the Jewish Leadership Council, to coincide […] 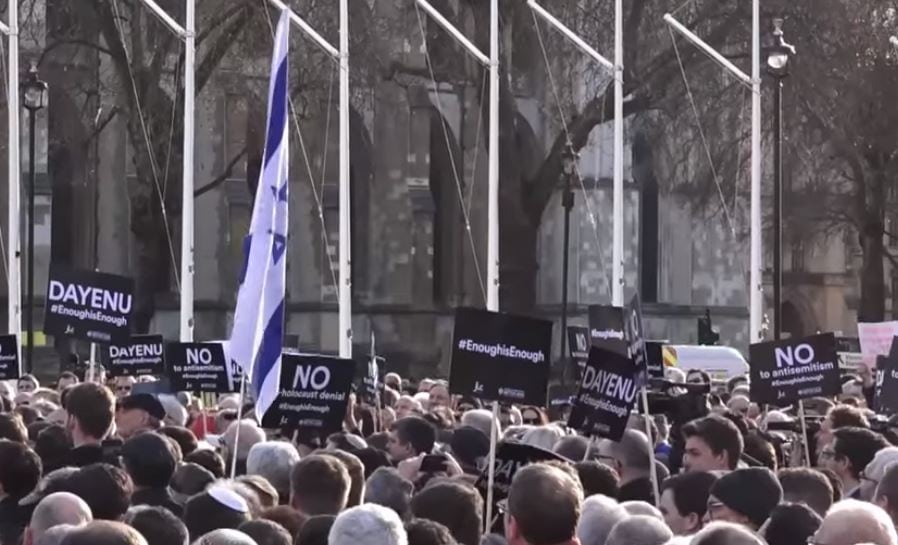 Yesterday, on the 26th March 2018, people gathered in London’s Parliament Square under the #EnoughIsEnough tagline.

The gathering was in protest at the Labour party’s perceived anti-Semitism problem. The protest was called for jointly by the Board of Deputies of British Jews and the Jewish Leadership Council, to coincide with them delivering a letter to the Parliamentary Labour Party.

Now firstly we need to address the issue of whether or not Labour does actually have an anti-Semitism problem.

I can only offer an opinion based on my lived experiences as a Jewish Labour party member, so people are of course free to disagree.

However since I, as a Jewish Labour party member, suffer this anti-Semitism people are so up in arms over I feel my opinion should be listened to.

So… does Labour have a problem with anti-Semitism? Short answer – yes.

I say this because I have suffered it first hand, from accusations of being in the pay of the “Israeli lobby” through to anti-Semitic tropes about dual loyalties  – albeit with the word Jew substituted for Zionist / Zio.

Anti-Semitism has always been present to some extent in left wing movements, in every movement, and in society more generally.

Which is not to say it is prevalent.

The issue within left wing movements is our sense of being the “good guys”. – The people who stand in solidarity with the oppressed peoples of the world.

So it is uncomfortable, perhaps even painful, to accept that elements within our movements are actively engaged in the oppression of a minority group.

However, no matter how difficult it may be, a truly progressive movement must be able to be self-critical and reaffirm its commitment to fairness and equality by confronting those amongst its own ranks who play an active role in oppressing Jews and attempting to shut them down over allegations of anti-Semitism.

Getting back to the #EnoughIsEnough protest, with everything I have just discussed, you’d be forgiven for thinking I’d support the protest.

Chiefly because I’m sceptical of the motives behind it. On face value, yes I’d support people coming together to oppose a particularly insidious form of racism which I endure almost daily (particularly on social media). I would one hundred per cent back anyone in their fight to combat racism of any kind, because racism is disgusting.

The #EnoughIsEnough protest, while seemingly admirable, is in my opinion a bit of a publicity stunt. It feels like an attack on Jeremy Corbyn personally, as opposed to opposing those anti-Semitic elements within the party.

Labour has, arguably, been slow to react to allegations of anti-Semitism from party members and people have rightly criticised the drawn out process of investigating and taking relevant action. That isn’t the fault of Corbyn though – this is in the hands of the compliance unit and the NEC. Quite rightly the leader has no direct influence over suspensions and expulsions. So criticisms of Jeremy Corbyn on that basis are disingenuous.

Corbyn’s reply to the BoD/JLC I feel was a welcome statement of intent from the Labour party leader.

He accepted his own personal failings, reaffirmed his commitment to make Labour safe for Jewish members and invited the BoD/JLC to meet with him to discuss the issues and how they can be addressed going forward.

What is truly necessary to combat anti-Semitism on the left is not the likes of Chuka Umunna or Liz Kendall grandstanding on social media, but a genuine united front both within the Labour party and the left more broadly.

Labour’s NEC needs to shake up its disciplinary procedures so that allegations are investigated promptly and any disciplinary action implemented as quickly as is practicable.

I urge everyone on the left who is genuinely committed to combatting anti-Semitism to read The Past Didn’t Go Anywhere by April Rosenblum.

A link to a free copy of the pamphlet is here.