By Mohamed Abdirahaman Saman, International Medical Corps, Somalia emergency response team When I met Nalow Hassan two weeks ago, the 30-year-old wife and mother had already lost two children. Aged six and four, the two youngsters had succumbed to acute watery diarrhoea. Now she is on the brink of losing a third – her youngest, 15-month-old […] 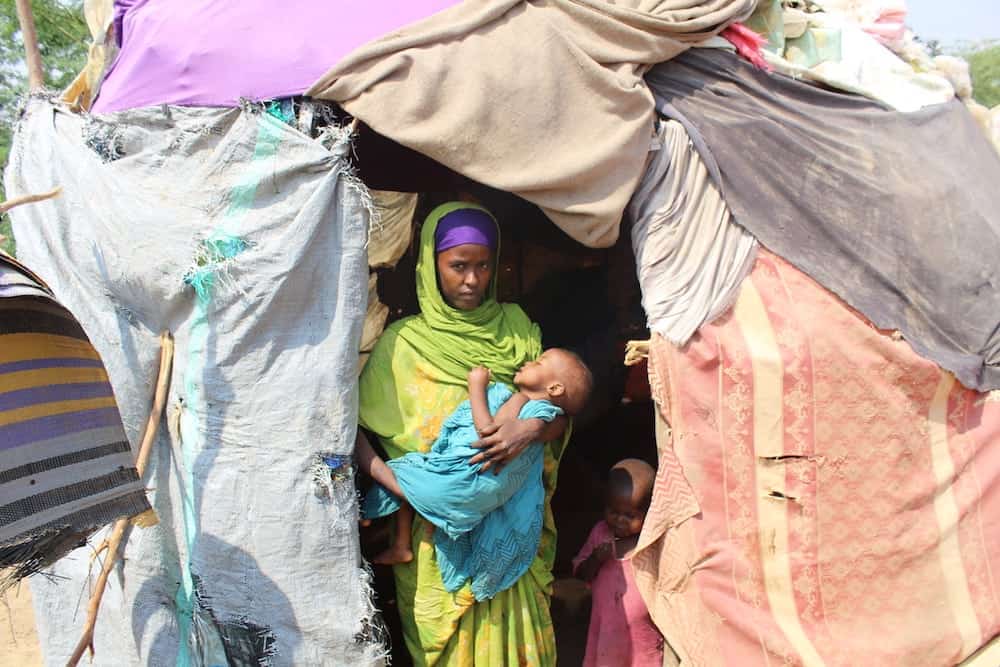 When I met Nalow Hassan two weeks ago, the 30-year-old wife and mother had already lost two children. Aged six and four, the two youngsters had succumbed to acute watery diarrhoea. Now she is on the brink of losing a third – her youngest, 15-month-old Ahmed Abdi, who is seriously ill and Nalow and her husband Abdi have no money to pay for medical care.

Tears streaming down her face, she told us that they only eat once a day if they are lucky – their lives and those of their children depend on whatever their neighbours can give them.

Nalow and her family fled from Tiyeeglow in the Bakool region of Somalia in October 2016 after the militant group Al-Shabaab  took control of the area. They now live in Domey displacement camp in Beledweyne, in south-central Somalia. According to the local authorities, 18,500 people live in makeshift shelters in the displacement camps around Beledweyne, where malnutrition is widespread and diseases, like acute watery diarrhoea, are rampant.

I visited Beledweyne with International Medical Corps’ emergency response team to better understand what the greatest needs were. The signs of Somalia’s drought are everywhere. Skeletal trees and animal carcasses dot the dusty, barren landscape. Whatever livestock is still alive is thin and weak, their eyes sunken and their legs dragging from dehydration and malnutrition. The River Shabelle, which cuts through Beledweyne, is dry now and people push the sand around in the hope of finding drinkable water.

In the displacement camps, I saw many children who looked malnourished as well as elderly people. When I asked camp residents how often they cook food per day, most responded twice—once in the morning and again at night. The camps are crowded, with little to no privacy.

Most of the displaced, like Nalow, come from Al-Shabaab-controlled areas to which humanitarian organisations like International Medical Corps have no access. Families continue to arrive in Beledweyne every day, seeking food, clean water, medical care and other relief. As we saw in Baidoa during the previous week, hygiene and sanitation and shelter are some of the most pressing needs. Some walk over 150 kilometres, surviving on very little water over two or three days, to reach safety.

We also visited the hospital in Beledweyne, which runs a stabilisation centre that cares for severely malnourished children with medical complications. Hospital staff told us that they had seen a three-fold increase in severe acute malnutrition cases during the last three months.

I have worked for International Medical Corps since 2011, when drought and conflict spiralled into a famine that killed an estimated 260,000 people. Half were children. I believe the humanitarian community is better prepared to respond than it was six years ago, but there are still thousands of families in need we cannot get to.

For people like Nalow and her family, receiving humanitarian assistance is not a luxury, but a life-and-death necessity.

After leaving Domey camp, my International Medical Corps colleagues and I arranged to get her 15-month-old son, Ahmed, to a nearby hospital for care. While his future, like that of so many Somalia, remains uncertain, at least for now Ahmed will receive the care he needs to survive.