The UK has shot itself in the foot by leaving the EU without trade deals with China and the US. 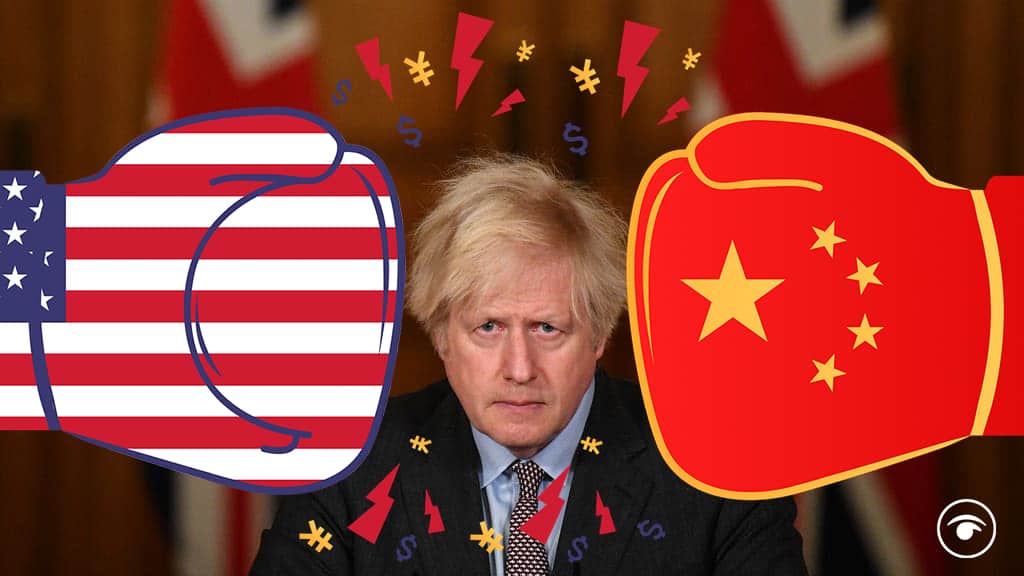 Workers and consumers hoped that post-Brexit “free trade agreements” (FTAs) would compensate for the nightmares inflicted by the UK’s hard exit from the EU. But without the leverage of belonging to one of the world’s biggest trading blocs, the UK now finds itself adrift: locked out of Europe without an FTA and trying to negotiate with a new, pro-EU American administration.

In December 2020, negotiators finalised the EU-UK Trade and Cooperation Agreement (EUTCA), which “provisionally” entered forced on 1 January 2021. British Chambers of Commerce Director General, Adam Marshall, lamented the government’s handling and “the impossible task they have set businesses” by refusing to work on a smooth transition.

The European Parliament blocked a rushed ratification, which is now due at the end of February. But with COVID sweeping through Europe, heads of states have higher priorities and asked for more time. EU lawyers cite, as reasons for delay, ambiguities in translations of the document, stating that late-April is a more realistic timeframe. For instance, international legal scholar, Holger Hestermeyer, reports: “In the German version of the EU-UK Agreement [the] … translator forgot to translate the first sentence of [Air Transport, Article 9].”

The European Commission says that EUTCA “does not cover any decisions relating to equivalences for financial services, the adequacy of the UK data protection regime, or the assessment of the UK’s sanitary and phytosanitary regime for the purpose of listing it as a third country allowed.”

At the end of 2020, the UK financial services sector transferred thousands of jobs and $700bn-worth of assets to France and Germany. Mastercard recently announced plans to pass potential Brexit-related fees onto customers via service charge increases.

According to the Tories, the above are mere bumps in the road. The main hopes for businesses (meaning profits) can be found in the US. Carefully avoiding legal penalties by not calling it a “negotiation,” Brexiteers worked in secret on a US-UK FTA, which they hoped could be ratified quickly with the pro-Brexit Trump.

But Trump is gone and the anti-Brexit Biden is in charge. “I’m not going to enter any new trade agreement with anybody until we have made major investments here at home and in our workers,” says Biden.

The Biden administration is also influenced by the strong Irish and EU lobbies that render Congress less enthusiastic about signing an FTA with Britain. Biden’s Democratic Party spent many painful years negotiating the Good Friday/Belfast Agreement (GFA) (1998) with Ireland, Northern Ireland, and mainland Britain. The compromise brought relative peace to the war-torn Emerald Isle, in large part by guaranteeing an open border.

To protect the GFA, the Northern Ireland Protocol to the EU Withdrawal Agreement commits Britain to imposing “no customs and regulatory checks or controls and related physical infrastructure at the border between Ireland and Northern Ireland.” But Tories boast that their Internal Market Act 2020 “does break international law” by failing to guarantee frictionless imports and exports, i.e. violating the Protocol.

Democratic House Speaker, Nancy Pelosi, responded: “If the UK violates that international treaty and Brexit undermines the [GFA], there will be absolutely no chance of a US-UK trade agreement passing the Congress.” Now-Secretary of State, Antony Blinken, said: “As the UK and EU work out their relationship, any arrangements must protect the Good Friday Agreement and prevent the return of a hard border.” A British official says that in November 2020, Biden advised PM Johnson over the “importance of implementing Brexit in such a way that upholds the [GFA].”

In addition to strategy, practical issues are an impediment. The Wilson Center notes that Britain’s successful animal rights lobby has meant that “months of negotiations … have failed” on agriculture and bioscience treaties. US e-commerce and social media giants generate billions of dollars in revenue via UK operations. But from April 2020, the Digital Services Tax (DST) increased their rates (by a mere 2 percent). DSTs would be included in FTA negotiations. The US Trade Representative states that Britain’s DST “discriminates against U.S. companies,” meaning that it could prove to be a stumbling block.

But British businesses can still profit from an FTA with China, right? James Kane of the Institute for Government points out that US allies, including Britain, will “be expected to take sides against China.”

As Britain isolates itself under the rhetorical pretext of “sovereignty,” China leads the 10-member (multilateral) Regional Comprehensive Economic Partnership (RCEP), whose members’ GDPs total $24 trillion. Under US President Barack Obama (2009-17), the US led the creation of a multilateral Comprehensive and Progressive Trans-Pacific Partnership (CPTPP) designed to lock China out of US-led FTAs. But the Trump administration preferred bilateral deals over multilateral ones and terminated the treaty.

By signing continuity FTAs with small CPTPP and RCEP economies like Vietnam (GDP $206bn), Britain hopes to join the pro-US CPTPP. But Team Biden feels the pressure from an American public opposed to such neoliberal, corporate globalization, so CPTPP might continue to fall flat. With regards to China’s RCEP, Investment Minister Lord Gerald Grimstone says that the UK merely “takes a close interest.” He does not say that the government is actively looking to join.

Former Assistant US Trade Representative for China Affairs, Jeff Moon, says that China will exploit the fact that Britain “has made itself very vulnerable by withdrawing from the European community and going it alone and not having trade deals lined up with either China or the United States.” As the US raises the issue of China’s human rights abuses, demands that “Five Eyes” countries (including the UK) prohibit Chinese technologies in telecoms infrastructure (e.g., Huawei), and sides with the people of Hong Kong, any pro-China policy will make a UK-US FTA less likely.

Biden says that he will not yet extend Trump’s Phase One Agreement with China, stating: “The best China strategy, I think, is one which gets every one of our [allies] on the same page.”

With food price hikes, import disruptions, and now medicine shortages, Operation Yellowhammer has come to pass. Yellowhammer is the baseline scenario for Brexit, which the government falsely claimed was the worst-case scenario (which they refuse to declassify and is actually called Black Swan). By January 2020, wage losses from the UK’s 400,000-plus Brexit-related redundancies totalled over £12bn, as well as £3.7bn in lost tax revenue. Automotive, transport, food and drink, finance, and construction were the worst-hit sectors.

In January this year, the Road Haulage Association reported that truckers from the EU were raising their freight prices from €1.50 per kilometre to €10 due to the government’s refusal to negotiate streamlined customs arrangements. Twenty-four lorries, most of them driven by UK seafood exporters, blocked roads in Westminster to protest the government’s betrayal.

As dangerous as food and finance price hikes are for poorer people, medicine shortages are potentially even more deadly. Europe’s consignments of the Pfizer-BioNTech vaccine are produced in an EU state (Belgium). UK doses could be delayed by the EU Commission’s decision to make pharmaceutical companies to give advanced export notices.

In an era of pandemic and climate emergency, when international solidarity is needed more than ever, we need a new government willing to sign onto streamlined access to the EU.