Forget the marginalised revolutionaries that first captured the country’s imagination, this is about a supermarket-dominating, tap conquering, marketed to the nines mega brew.

by Jack Peat
in Marketing, Opinion 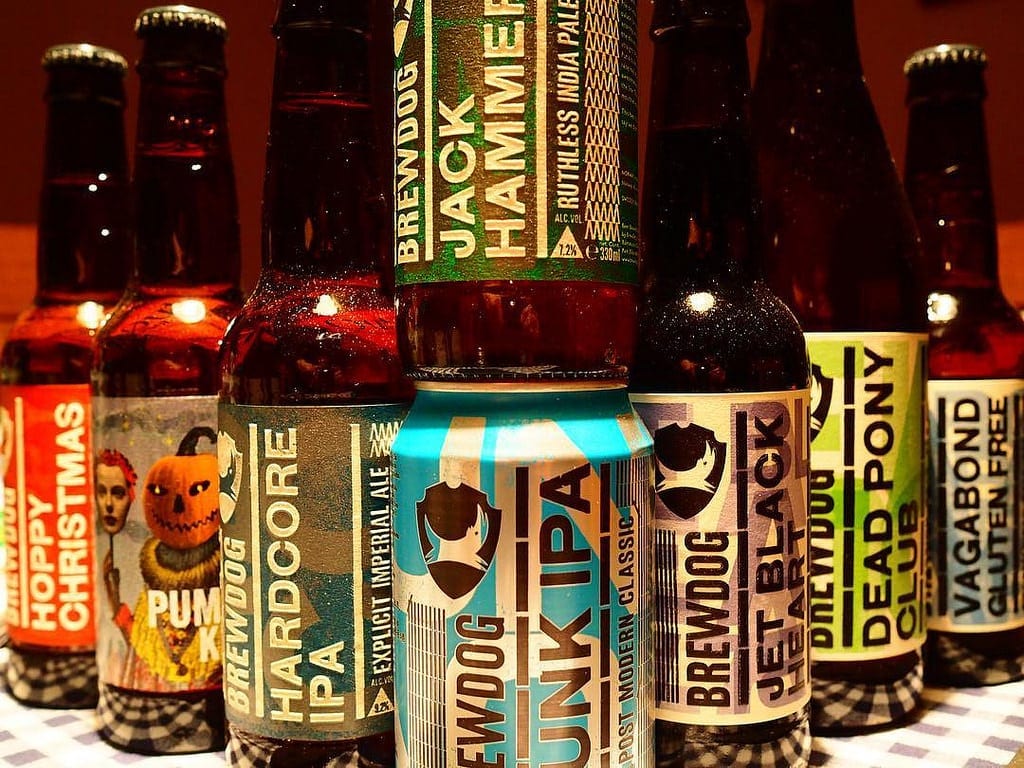 Punk beer brand Brewdog is a month in to a national advertising campaign slamming rival brewers with pompous and flawed rating comparisons.

The marketing push that has been rolled out on billboards and across national newspapers takes overall consumer scores of popular lagers from the website RateBeer.com, juxtaposing them with the superior score given to Brewdog’s Punk IPA.

But peel back the layers on their brash campaign and you will notice that something is awry. For a start, the comparisons are not like-for-like. Pitting a hoppy, fruity India Pale Ale against run-of-the-mill lagers is chalk and cheese as far as I’m concerned. A quick look on the aforementioned ratings site shows other similar styled beer available in supermarkets fare much better; Vocation Life & Death IPA, for example, scores a more competitive 96/100, and Beavertown’s Gammay Ray is marked 98/100.

I also take umbrage to the suggestion that Budweiser, Carling and Fosters fail to score more than three points out of a potential 100. To an outsider a zero point score would translate to a pretty much undrinkable product, yet Bud is a perfectly pleasant enough beer and Carling and Fosters have been a mainstay in British pubs for several decades. They’re not likely to win plaudits among the beer anoraks but to the average drinker they serve their purpose quite well, and it is a rather pompous affront to suggest otherwise.

It is also ironic, it must be pointed out, that they are using a rating system part-owned by AB InBev when they take such a strong and widely publicised stance against the mega-corporation in their bars. They stopped supplying Camden ales when the London brewer was sold to the world’s biggest drinks company and they often use their independence from such multinationals as justification for its increasingly dubious claim as a craft brewer, like in this post, which “nails their colours to their mother fucking mast”.

Yet the more Brewdog embark on marketing campaigns such as this the more they detract from the spirit of the craft beer revolution with which they claim to be such a big part. As Kirsty Walker wrote on her blog Lady Sinks the Booze, it’s less about the beer and more about the bark nowadays. In her words, “for every slightly interesting thing they do with beer, there are another five hundred cock-ups which make everyone groan, whether it’s ‘beer for girls’ or a complete car crash of a televised recruitment drive. When they trend on Twitter, your first thought is not, ‘I wonder what innovative beer-related story this will be,’ but ‘What are these clowns up to now?’”

By pitting their IPA against mainstream pub brands Brewdog are declaring quite brazenly that they are now bidding for the middle ground, the mainstream. Forget the marginalised revolutionaries that first captured the country’s imagination, this is about a supermarket-dominating, tap conquering, marketed to the nines mega brew.

Step aside for the best beer in the world Carlsberg. Probably.