During his trip to London in 2005 to support the newly launched high-profile campaign #MakePovertyHistory, the late, great and hugely missed Nelson Mandela said, “Poverty is man-made and can, therefore, be unmade.” Today, 50 years after another great black civil rights leader, Martin Luther King, established the Poor People’s Campaign, in which tens of thousands from […] 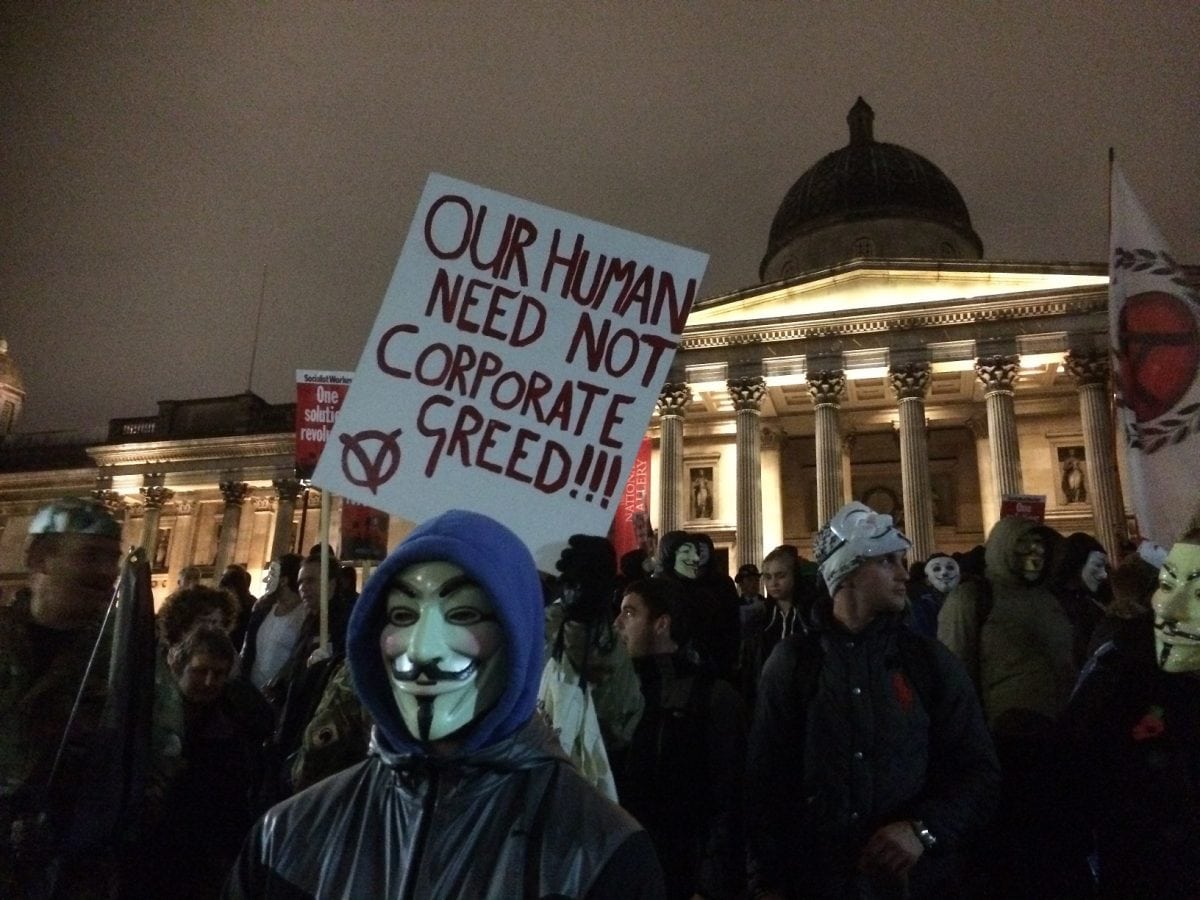 During his trip to London in 2005 to support the newly launched high-profile campaign #MakePovertyHistory, the late, great and hugely missed Nelson Mandela said, “Poverty is man-made and can, therefore, be unmade.”

Today, 50 years after another great black civil rights leader, Martin Luther King, established the Poor People’s Campaign, in which tens of thousands from all faiths and all cultures took to the streets, the campaign has been re-established. This is something of which you may not be aware, due to the failure of the mainstream media to report this new, rapidly growing movement and campaign, which has been named “40 Days of Moral Action.”  While the US government’s own figures say 41 million Americans are in poverty, organisers of the Poor People’s Campaign point to the research of the Institute for Policy Studies, a progressive think tank that works on social issues, which indicates that the true figure of those in poverty is almost 140 million people.

Americans, such as Olga Bautista and her family, are part of protests in 30 state capitals as well as in Washington DC. Their demands? An end to what they see as the systematic racism and voter suppression with which poverty is so deeply intertwined. Bautista says, “We must fulfil the work of Mr King. We will create different communities, a different neighbourhood. We all must stand up and say ‘It ends with me.’”  The Poor People’s campaign is a coalition of faith leaders, civil rights activists, low paid workers and unionists, people whom the party political system has passed by. Poverty, despite the staggering number of its victims, is not cool in the USA or UK. It’s not aspirational; it is something that affects others.  Many poor people, for a huge number of reasons, do not vote, which deprives them of the voice and power they could have collectively.

While researching my book, Food Bank Britain, I came across the research of the J.F. Rowntree Foundation, a UK think tank, which studies the economics of poverty. They made a careful and resaoned estimate (see graph) that poverty in the UK costs us all a staggering £78 billion a year.  Yes, you did read that right: poverty costs us all £78 billion a year, so even if people care little about tackling or ending poverty on social grounds, should we not be opposing it on economic ones? Regardless of your politics, you are paying through your taxes for this failure to deal with this issue that the government chooses to ignore. They did not seem to realise that poverty is a luxury that we simply cannot afford. 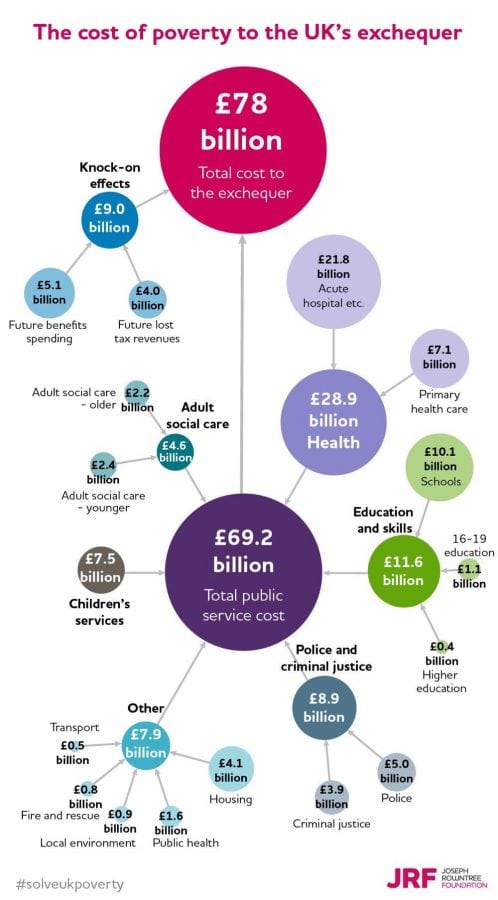 The latest official UK government figures for poverty say that around 12 million people are in poverty in 2018. Most commentators would agree that this already staggering figure, which equates to twice the population of London, is an underestimate. Think about that for two minutes. The stigma of poverty is such that many pensioners will not tell their own children they have had nothing to eat, while many mums will keep the fact that they have gone several days without food secret from their partners.

When not simply ignored, the UK government’s solution of choice across the country is to criminalise those who are suffering; to criminalise the homeless, for example, who exist in increasing numbers on our streets, and to fine hundreds of hungry people for stealing to eat, who are then jailed because they do not have the money to pay the fine, as could be predicted from the fact that they did not have the money to buy food in the first place. Has the Make Poverty History movement of 2005 just disappeared like the morning dew?  Where are the angry pop stars, actors and politicians who should be demanding action on this? At the very least, shouldn’t the Labour party, The Greens, PC, SNP and the unions be pledging to make poverty history NOW, in 2018? How bad does it need to get? 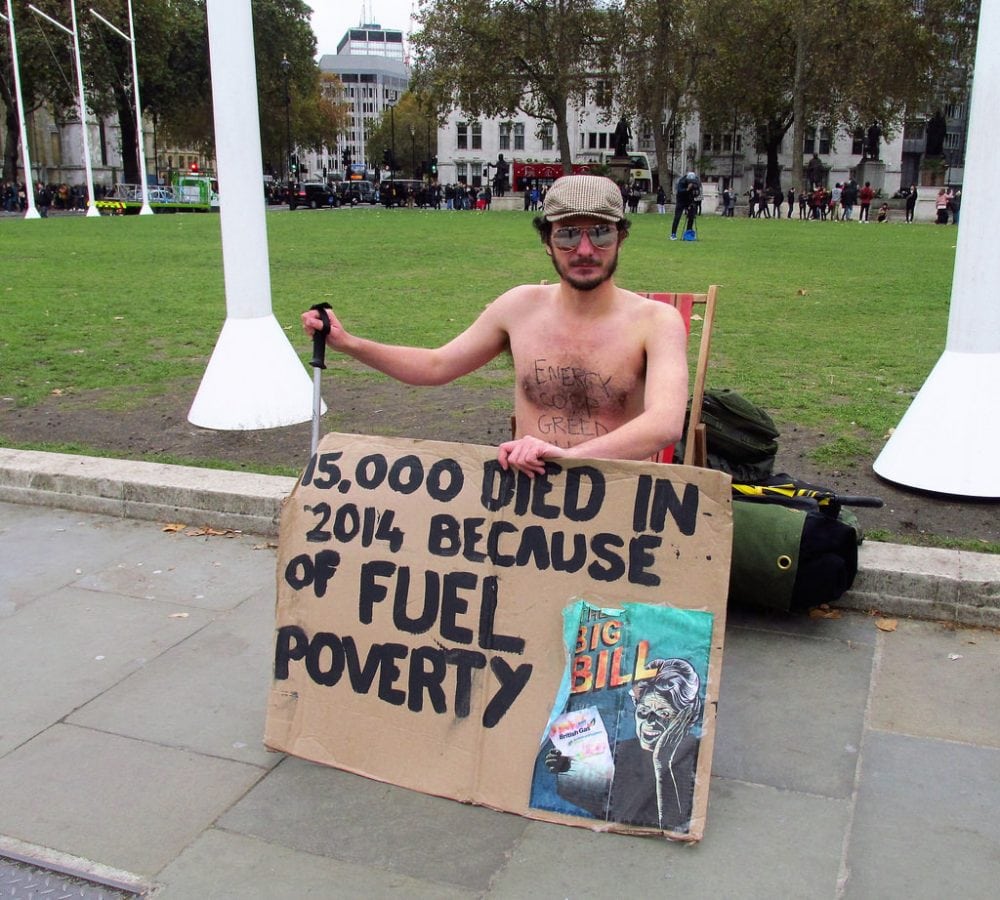 Given the compelling social and economic grounds for doing so, why has no MP come out and supported the Labour Party member’s motion calling for the next Labour Government to appoint a minister to make poverty history? This motion was passed at the Blackpool conference and is being passed monthly at local Labour Party branches across the UK, as more and more members e-mail their local party branch, demanding that they support this call.

There is a very real issue here that needs addressing, if for no other reason than that we cannot as a country sustain more and more people living on the streets. Many are so unwell due to an inadequate diet that they need to be hospitalised, while huge numbers in the poorest areas have simply given up on the system that serves them so badly. Why are we not ashamed and alarmed that so few people vote in the poorest areas? In many areas it is estimated that around 25 per cent of the poor are not even registered to vote and yet Brexit proved, whatever your feelings about it, that when people, both rich and poor, truly feel that their vote can make a difference, they turn out in their millions.

The Poor People’s Campaign is shining a light on a part of the USA that most people have no idea about, and which its own political leaders choose to ignore in the hope that it will go away.  After all, it is a necessary by-product of capitalism; we can’t all be rich.

In 2018, is it really too much trouble for us to send off an e-mail, a tweet, or a post card to our local MP or our local union or party branch and to ask them to support this motion:  “This local branch calls on our party to pledge that, when in government, it will appoint a minister to Make Poverty History?” Or do we just walk away?  It’s not our problem – or is it?  As you read this, people across the UK and the USA are being arrested, put on trial, and, in far too many cases, jailed. Poverty should not automatically condemn anyone to a prison cell, nor should speaking out and protesting about the injustice of it all in a world where so much money exists in the hands of so few.

Nelson Mandela and Martin Luther King both led the Poor People’s Campaign against poverty. Can’t we, as fellow human beings, take up their cause and do something to turn their dreams and aspirations into reality in 2018?

Ray is author of Food Bank Britain and LIBERTY about the early years of the UK civil rights movement.