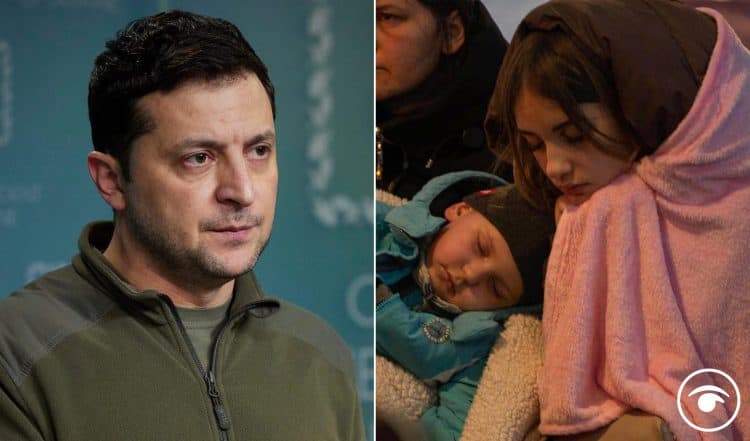 Volodymyr Zelenskyy used an address on what is known as Forgiveness Sunday in Orthodox Christianity to reiterate that Ukraine will never forgive the shelling of its homes, the killing of unarmed people and the destruction of its infrastructure.

“And God will not forgive, either today or tomorrow — never. And instead of a day of forgiveness, there will be a judgment day. Of this I am sure,” he said in the emotive speech.

He delivered a scorching attack on Nato – criticising it for refusing to enforce a no-fly zone and accusing it of leaving his people to die.

“The alliance has given the green light to the bombing of Ukrainian cities and villages by refusing to create a no-fly zone.”

Shaun Walker tweeted out part of his speech and wrote: “Written down like this Zelenskiy’s address tonight reads like a powerful poem.”

The president has been hailed as “effortlessly personable” with a “resoluteness” that is “a mirror of the Ukrainian people” by a director who has worked on 10 films with the leader.

David Dodson told BBC Breakfast: “He is effortlessly personable. He is somebody who always makes you feel like you’re trusted, like you are about to do your best work, and that he believes in you to be able to bring that.

“I started out editing his movies and I ended up directing him in three films and he always made me feel like I was Spielberg, he would come on to the set and look at you and you just felt completely capable.

“So it’s not surprising that he’s risen to this moment, at least not to me.”

“My experience in Ukraine, and I’m married to a Ukrainian woman for 12 years now that I met on a Zelensky movie in Kyiv, is that this is who they are.

“So it’s not surprising to see, to see Volodymyr behaving this way, because in my experience, it’s the heart of who Ukrainians are.”

There was a lot of support for his speech online: