The Ukrainian president told Europe to "wake up" to the threat of Putin and urged "anybody who knows the word Chernobyl" to help prevent another nuclear disaster on the continent. 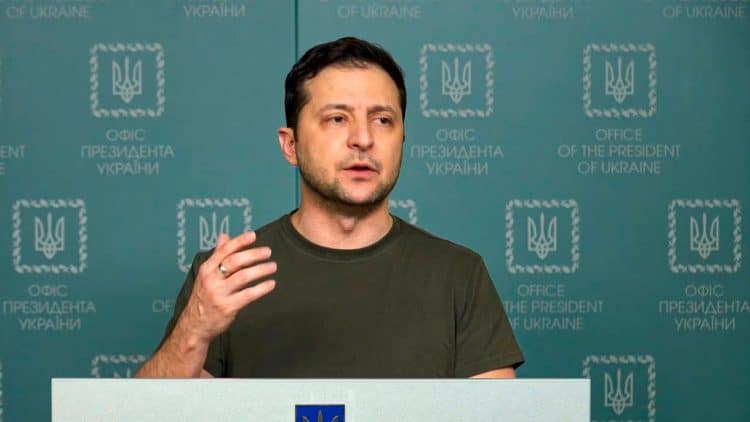 Ukraine’s leader has warned it will be the “end for Europe” if an explosion occurs due to Russian forces shelling the continent’s largest nuclear power plant.

In an emotional speech in the middle of the night, Ukrainian President Volodymyr Zelensky said he feared an explosion at the Zaporizhzhia nuclear plant that would be “the end for everyone. The end for Europe. The evacuation of Europe”.

“Only urgent action by Europe can stop the Russian troops,” he said. “Do not allow the death of Europe from a catastrophe at a nuclear power station.”

But most experts saw nothing to indicate an impending disaster.

The Ukrainian emergency service said the fire at the plant was out just before 7.30am (5.30am UK) and leading nuclear authorities were concerned — but not panicked — about damage to the facility.

The assault triggered phone calls between Mr Zelensky and US President Joe Biden and other world leaders. The US Department of Energy activated its nuclear incident response team as a precaution.

The International Atomic Energy Agency said the fire had not affected essential equipment and that Ukraine’s nuclear regulator reported no change in radiation levels. The American Nuclear Society concurred, saying that the latest radiation levels remained within natural background levels.

“The real threat to Ukrainian lives continues to be the violent invasion and bombing of their country,” the group said in a statement.

Jon Wolfsthal, who served during the Obama administration as the senior director for arms control and nonproliferation at the National Security Council, said the plant’s reactors have thick concrete containment domes that should protect them from tank and artillery fire.

But he too was concerned about a potential loss of power at the plant, which could imperil its ability to keep the nuclear fuel cool.

The mayor of Enerhodar said earlier that Ukrainian forces were battling Russian troops on the city’s outskirts. Video showed flames and black smoke rising above the city of more than 50,000, with people streaming past wrecked cars.

Ukrainian Prime Minister Denys Shmyhal called on the West to close the skies over the country’s nuclear plants. “It is a question of the security of the whole world!” he said in a statement.

The US and Nato allies have ruled out creating a no-fly zone since the move would pit Russian and Western military forces against each other.

Vladimir Putin’s forces have brought their superior firepower to bear over the past few days, launching hundreds of missiles and artillery attacks on cities and other sites around the country and making significant gains in the south.

The Russians announced the capture of the southern city of Kherson, a vital Black Sea port of 280,000, and local Ukrainian officials confirmed the takeover of the government headquarters there, making it the first major city to fall since the invasion began a week ago.

Heavy fighting continued on the outskirts of another strategic port, Mariupol, on the Azov Sea. The battles have knocked out the city’s electricity, heat and water systems, as well as most phone service, officials said. Food deliveries to the city were also cut.

Associated Press video from the port city showed the assault lighting up the darkening sky above deserted streets and medical teams treating civilians, including a 16-year-old boy inside a clinic who could not be saved.

The child was playing soccer when he was wounded in the shelling, according to his father, who cradled the boy’s head on the gurney and cried.

Severing Ukraine’s access to the Black and Azov seas would deal a crippling blow to its economy and allow Russia to build a land corridor to Crimea, seized by Moscow in 2014.