Women’s rights activists in Tunisian led an historic march on Saturday to demand equal inheritance rights for both sexes in the North African country. Like other Arab countries, Tunisia’s inheritance law is based on Islamic jurisprudence, and specifies that female heirs must receive only half the amount that males are entitled to. Suad Abu-Dayyeh, from women’s […] 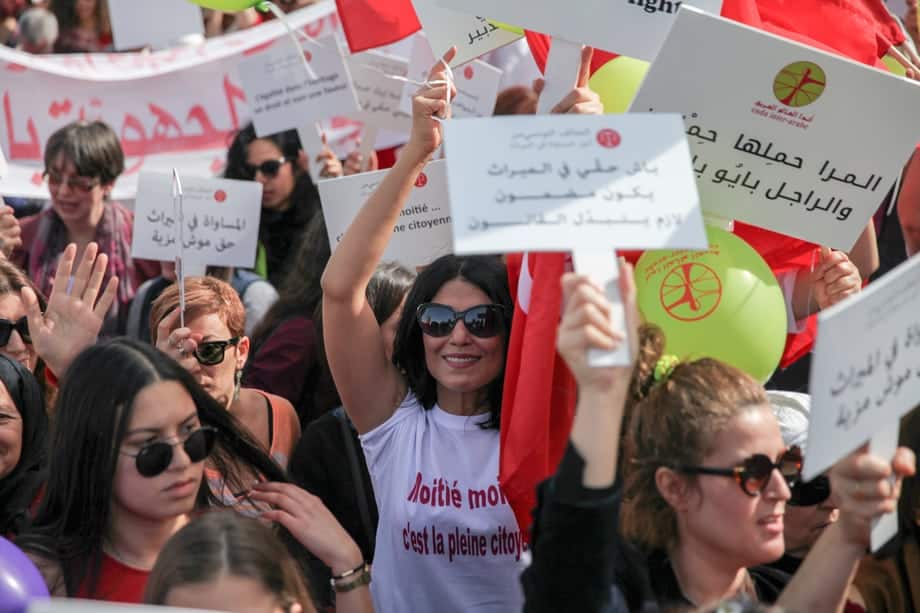 Women chant slogans while raising placards which read in Arabic “equality in inheritance is a right not a favor”, during a march held in Tunis, Tunisia to call for equal inheritance rights and gender equality. Photos © Chedly Ben Ibrahim for Equality Now

Women’s rights activists in Tunisian led an historic march on Saturday to demand equal inheritance rights for both sexes in the North African country.

Like other Arab countries, Tunisia’s inheritance law is based on Islamic jurisprudence, and specifies that female heirs must receive only half the amount that males are entitled to.

Suad Abu-Dayyeh, from women’s rights organisation Equality Now, explains: “The Qur’an states that daughters in the Islamic world inherit half the shares of sons.”

“This has made discussions about the introduction of equal inheritance rights a highly sensitive topic across the Arab world, with conservatives and some Muslim clerics arguing that it is contrary to Islamic teachings and a threat to the patriarchal structure of society.”

Habib Bourguiba, Tunisia’s first President post-independence, banned polygamy but met with religious opposition when he tried to introduce inheritance equality in the 1970’s.

In August 2017, Tunisia’s secular President Beji Caid Essebsi made a speech advocating for equality in inheritance and called for the introduction of legislation granting equal inheritance rights to women. The President announced the establishment of a committee to examine “individual liberties” and “equality in all domains”, and a report is due to be released in May which is expected to include recommendations on the reform of inheritance laws.

President Essebsi’s comments have been opposed by conservative Muslim clerics who have released a statement arguing the proposals amounted to “a flagrant violation” of Islamic precepts.

Women’s rights groups in Tunisia have been campaigning for the reform of inheritance rights for years, arguing it is a significant barrier for women, reduces their economic autonomy, and contradicts international human’s rights conventions by discriminating on the basis of gender.

It also contradicts the 2014 Tunisian constitution which stipulates full equality between men and women. The constitution was introduced following the popular uprising of 2011 that led to the overthrow of the country’s autocratic leader President Zine El Abidine Ben Ali.

Saturday’s march, which took place in the capital city Tunis, is being seen as an important demonstration of support for President Essebsi’s initiative. The event was arranged by a coalition of women’s rights groups to commemorate International Women’s Day. Organisers estimate that at least 2000 people attended, with demonstrators chanting the slogan, “Equality, a right, not a privilege/  المساواة حق موش مزية”.

Abu-Dayyeh, who was at the march, said: “There was a fantastic mix of women and men, the young and the old, listening to one another, celebrating achievements and calling for greater gender equality.”

“It was inspiring to see thousands together on Tunisia’s streets sending a clear message that equal inheritance rights for women are not a privilege, they are a human right.”

Birthplace of the ‘Arab Spring’, Tunisia is seen as forging the way for women’s emancipation in the Arab world with various significant legal gains bringing greater gender equality, although widespread discrimination still remains.

In July 2017, Tunisia closed a legal loophole which allowed a rapist to escape punishment by marrying his victim.

Following on in September, Tunisia announced the abolition of a law banning women from marrying non-Muslims, with the BBC reporting that a spokeswoman for President Essebsi congratulated women on gaining “the freedom to choose one’s spouse”. Previously, a non-Muslim man had to convert to Islam and provide a certificate verifying his conversation before he was allowed to marry a Tunisian Muslim woman.

Another advance came in February 2018, when a new law came into effect which broadens the definition of violence against women to recognise forms of physical, financial, moral and sexual abuse.

“This march calling for equality inheritance rights marks an historic moment in the women’s rights movement in the region, with Tunisia once again leading the way. I think we will see the ripple effects being felt elsewhere, with women feeling encouraged to begin challenging unjust inheritance rights in their own countries”, concludes Abu-Dayyeh.