Twenty Democrats have debated on television in the US this week. 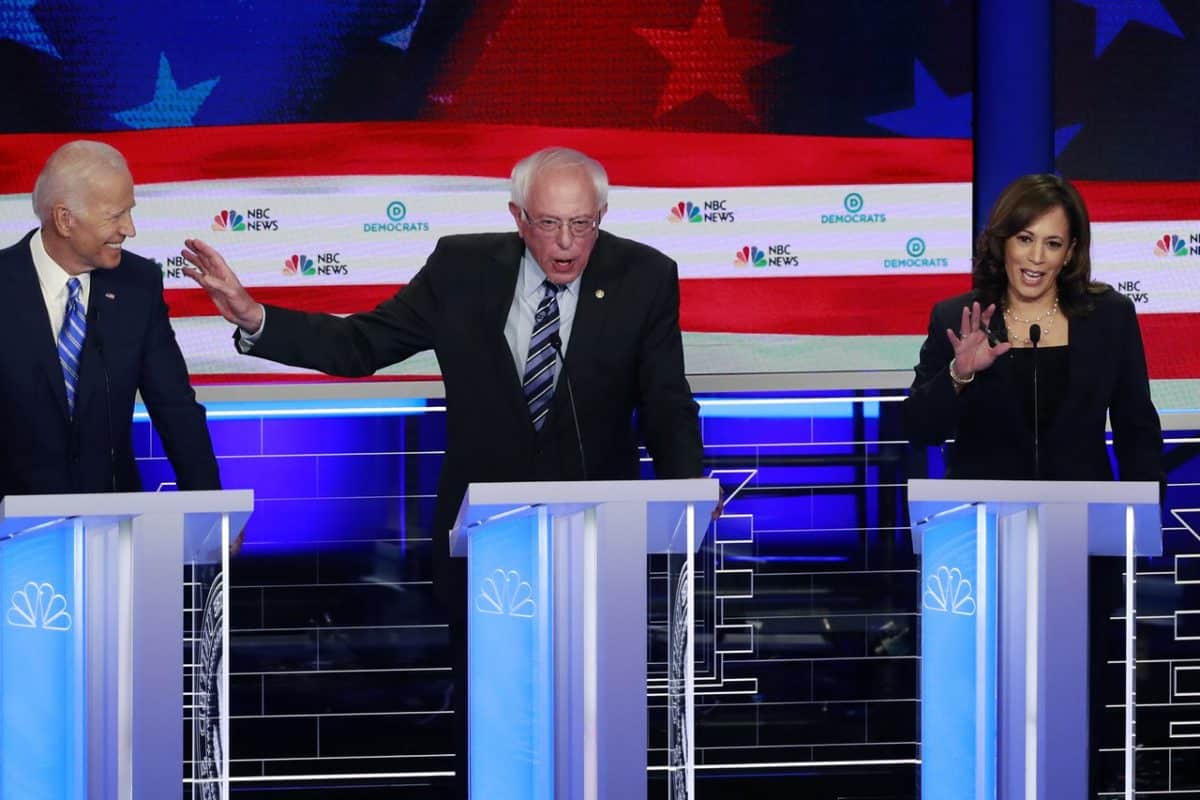 Democratic divisions over race, age and ideology surged into public view as the party’s leading US presidential contenders faced off in a fiery debate over who is best positioned to take on President Donald Trump.

The Democratic Party’s early front-runner, 76-year-old former vice president Joe Biden, was forced to defend his record on race in the face of tough questions from California Senator Kamala Harris, the only African American on stage.

That was only after he defended his age after jabs from one of two millennial candidates in the prime-time clash.

“I do not believe you are a racist,” Ms Harris said, although she described Mr Biden’s record of working with Republican segregationist senators on non-race issues as “hurtful”.

Joe Biden has been collecting wealthy and influential backers, pitting himself as a statesmanlike best bet to beat Donald Trump in 2020 against the other would be Democrat presidents.

Biden was making much of his Vice-Presidential credentials, taking credit for the things the Obama administrations achieved in TV debates.

But in last night’s debate, outside runner Kamala Harris tore strips off the political veteran and showed what how fierce she could be if pit against Donald Trump in 2020.

Perhaps Joe Biden’s most gnarly Achilles heel are his shocking attempts to prevent racial desegregation of schools in the 1970s.

Kamala Harris made the issue personal, telling how she was one of the first pupils to benefit from being bussed into mixed schools to make educational opportunities more equal.

Her emotional and compelling argument cut through Biden’s attempt to portray himself as a unifying figure that could appeal to all voters.

On a night with a lot of fiery rows, she appeared to look at points like the grown up in the room.

Though again, Bernie Sanders was able to dictate much of the debate and many of the issues that need urgently sorting out to heal America.

And it was Bernie Sanders who did not allow Joe Biden to wriggle out of the other area he is not keen to talk about – his vote for the Iraq War.

He declared, “I ran because of civil rights.”

For moments on Thursday night, a fierce intraparty debate that had been simmering just below the surface about the party’s future was exposed on national television.

The showdown featured four of the five strongest candidates — according to early polls, at least.

Those are Mr Biden, Mr Sanders, Pete Buttigieg of Indiana and Ms Harris.

Massachusetts Senator Elizabeth Warren, who debated on Wednesday night, is the fifth.

Together, the two nights gave millions of Americans their first peek inside the Democrats’ unruly 2020 season.

There are so many candidates lining up to take on Mr Trump that they do not all fit on one debate stage — or even two.

Twenty Democrats debated on national television this week in two waves of 10, while a handful more were left out altogether.

For example, the former vice president, along with the other candidates on stage, raised his hand to say his health care plan would provide coverage for immigrants in the country illegally.

Mr Biden, like Mr Sanders, who is 77, also represents a different generation from several candidates on stage.

The age difference was noted by California Representative Eric Swalwell, who said, “Joe Biden was right when he said it was time to pass the torch to a new generation of Americans 32 years ago”.

The showdown played out in Florida, a general election battleground that could well determine whether Mr Trump wins a second term next year.

He added: “Donald Trump has put us in a horrible situation. We do have enormous income inequality.”

Mr Biden’s strategy is designed to highlight his status as the front-runner, and as such, the Democrat best positioned to take down the president at the ballot box.

Above any policy disagreement, Democratic voters report that nothing matters more than finding a candidate who can beat Mr Trump.