Turkey’s broadcasting watchdog said TV networks could face fines and bans if they don’t reign in their coverage of the fires ravaging the country.

by Andra Maciuca
in World News 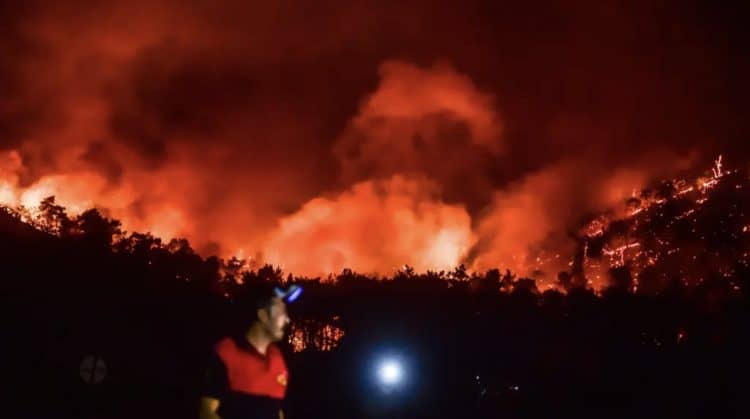 Turkey’s broadcasting watchdog has warned TV networks they could face fines and bans if they don’t soften their coverage of wildfires.

The warning comes after the Turkish government was heavily criticised for allegedly failing to maintain vital firefighting aircraft, Bloomberg has reported – a criticism which President Recep Tayyip Erdoğan said was part of a foreign plot against against the country.

Ibrahim Uslu, deputy chairman of the Radio and Television Supreme Council said they are not against reporting the forest fires currently engulfing the south-west, but cautioned against coverage that “creates uproar and chaos”.

He suggested images showing hurt animals and people screaming are “harmful” – and said events from the scene “may be reported as soft as possible”.

The council criticised TV networks for not focusing on fires that have been extinguished while the country faces its worst wildfires in decades because of near-record temperatures.

A member of the broadcasting council from the opposition party said that “turning cameras away from the fires doesn’t mean they were put out”, added: “Those cameras have to be the public’s ears and eyes.”

It slammed the watchdog for its “deepening censorship” of independent media outlets, arguing the vast majority of TV stations are supportive of the government.

Hugh Williamson, Europe and Central Asia director at Human Rights Watch said: “The heavy sanctions on broadcasting outlets critical of the government by Turkey’s media watchdog demonstrates how a crucial public institution has become an arm of President Erdoğan’s government.

“Suspending broadcasts or levying heavy fines against the few remaining television stations that dare to air programs critical of the government violates their right to free speech.”

The fires in Turkey come less than two weeks after wildfires raged on the island of Sardinia. Nearly 400 people were evacuated and several homes were damaged, as around 10,000 acres were estimated to have been engulfed by flames.

Flames also raced through Northern California last month, causing Governor Gavin Newsom to declare a state of emergency for four northern counties because of “conditions of extreme peril to the safety of persons and property”.

According to PA press agency, the wildfires are often caused by a mix of unusual random and short-term natural weather patterns but they are exacerbated by long-term climate change caused by humans.