Firefighters said almost 400 people have been evacuated and several homes were damaged. 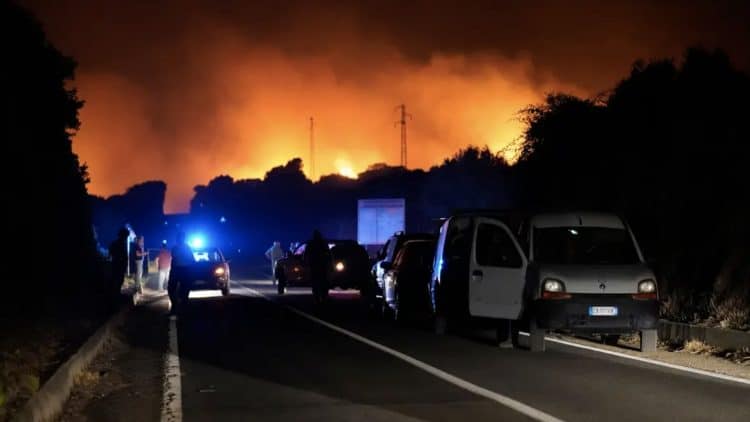 Nearly 400 people have been evacuated after wildfires raged Sunday on the island of Sardinia.

Civil protection authorities said a preliminary survey indicates 10,000 acres have been consumed by flames around Montiferru, near the centre of Italy’s second-largest island.

Authorities evacuated 200 people from the town of Cuglieri overnight and another 155 from Sennariolo.

More than half of those evacuated in Cuglieri were allowed to return home on Sunday, the news agency ANSA reported.

Eleven aircraft were working to put out the flames, the head of the island’s civil protection agency, Antonio Belloi, told ANSA.

Efforts were being hampered by hot south-westerly winds, putting the fire danger level at “extreme”.

Meanwhile, flames racing through rugged terrain in Northern California destroyed scores of homes as the state’s largest wildfire intensified and numerous other blazes battered the western US.

The Dixie fire, which started on July 14, had already levelled more than a dozen houses and other structures when it tore through the tiny town of Indian Falls after dark.

It was burning in a remote area with limited access, hampering firefighters’ efforts as it advanced eastwards, officials said.

The blaze has charred more than 181,000 acres (73,200 hectares) in Plumas and Butte Counties and prompted evacuation orders in several small communities and along the west shore of Lake Almano, a popular getaway. The fire was 20% contained as of Saturday night.

Meanwhile, the nation’s largest wildfire, southern Oregon’s Bootleg fire, was almost halfway surrounded on Saturday as more than 2,200 crew members worked to corral it in the heat and wind, fire officials said.

The growth of the sprawling blaze had slowed, but thousands of homes remained threatened on its eastern side, authorities said.

“This fire is resistant to stopping at dozer lines,” said Jim Hanson, a fire behaviour analyst, in a news release from the Oregon Department of Forestry. “With the critically dry weather and fuels we are experiencing, firefighters are having to constantly re-evaluate their control lines and look for contingency options.”

In California, Governor Gavin Newsom declared a state of emergency for four northern counties because of wildfires that he said were causing “conditions of extreme peril to the safety of persons and property”. The proclamation opened the way for more state support.

Such conditions are often from a combination of unusual random, short-term and natural weather patterns heightened by long-term, human-caused climate change. Global warming has made the West much warmer and drier in the past 30 years.

Another high-priority blaze, the Alder Creek fire in south-west Montana, had charred more than 6,800 acres (2,750 hectares) and was 10% contained on Saturday night. It was threatening nearly 240 homes.