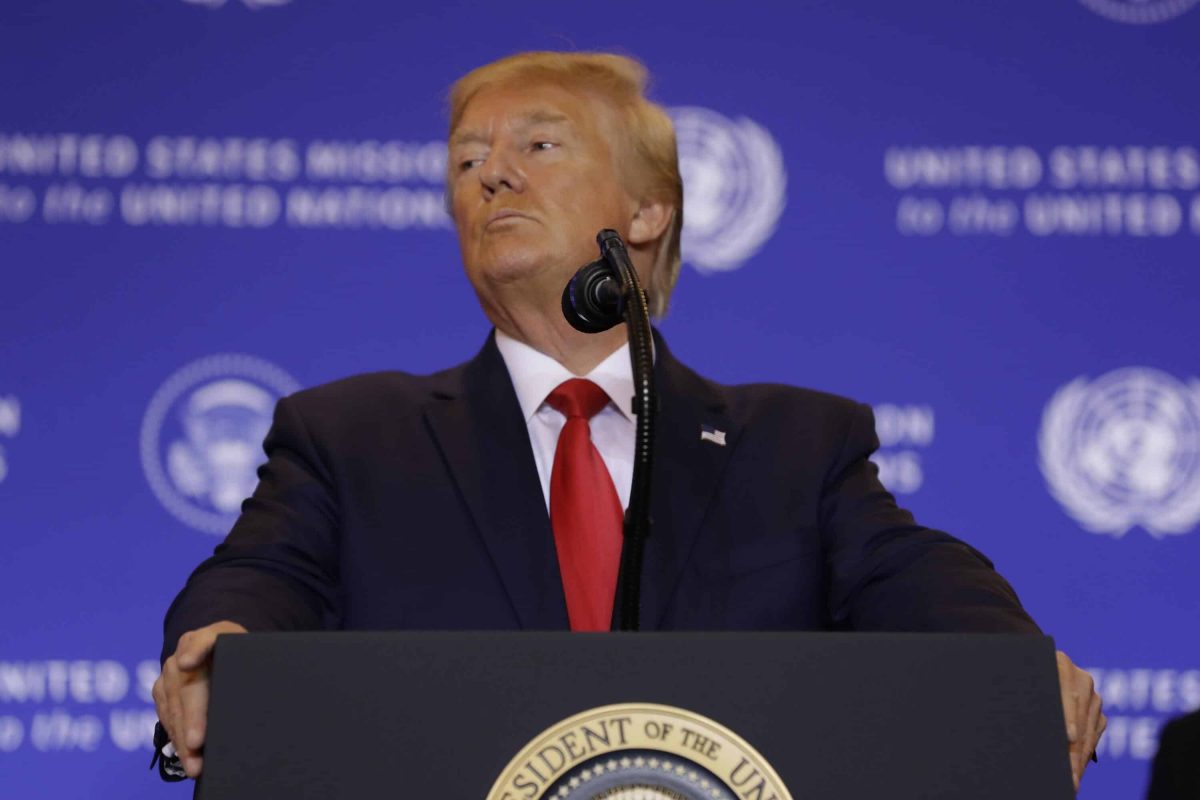 Democrats are steeling themselves for an impeachment investigation that could jeopardise their House majority and alienate the suburban voters who have recently warmed to the party and will be vital to defeat President Donald Trump next autumn. In polls most Americans are against impeaching Donald Trump.

But a growing consensus is emerging among anxious Democrats: The risks are worth it. And Trump’s latest alleged flagrant abuse of power cannot go ignored.

Democrats were emboldened by the release of a rough transcript of Mr Trump’s July call with Ukrainian President Volodymyr Zelenskiy, which confirmed the Republican president repeatedly asked a foreign power to investigate his leading Democratic political rival, Joe Biden. This after freezing 400 million in aid to the country.

The conversation between the two leaders is one piece of a whistleblower’s complaint, which followed the July 25 call.

The complaint is central to the formal impeachment inquiry launched on Tuesday by House Speaker Nancy Pelosi.

The inspector general for the intelligence community wrote to the Director of National Intelligence in August that he believed the conversation between Mr Trump and Ukraine’s leader could have been a federal campaign finance violation because the president could have been soliciting a campaign contribution from a foreign government, a Justice Department official said.

The whistleblower — a member of the intelligence community — said in their complaint that they had heard the information from “White House officials”, but did not have firsthand knowledge of the call, the Justice Department official said.

Prosecutors from the department reviewed a transcript of the call and determined the president did not violate campaign finance law.

When the intelligence committee then finally saw the complaint of the secret service whistleblower who had expressed concerns after the phone call – such calls are always listened in on – they found the details “disturbing” enough to act on too.

House chair Nancy Pelosi last night joined the Intelligence Committee in a secure room to review the whistleblower’s complaint that had brought Trump’s alleged blatant collusion with a foreign head of state to hit an electoral rival to light.

After reviewing it, Adam Schiff told reporters: “I found the allegations deeply disturbing. I also found them very credible.”

“The guy has got to be stopped,” said Democratic former Virginia Governor Terry McAuliffe, who had previously urged Democrats to move cautiously on impeachment because the Republican-led Senate would almost certainly reject articles of impeachment.

“This is a president using presidential power to invite a foreign government to come into our country and interfere with our democracy,” Mr McAuliffe continued. “This is too much.”

Fears that Democrats could face an electoral backlash over the investigation.

Democrats will face tremendous political peril over the next year, however — a fact underscored by a far more cautious approach from the Democratic governors of Minnesota, Pennsylvania and Wisconsin, who declined Wednesday to endorse House Speaker Nancy Pelosi’s approach.

Minnesota Governor Tim Walz, a former congressman, called details of Trump’s phone call “deeply troubling,” but said impeachment may not be the way to go.

“It may not be politically good to do because I think at this point I, like many Minnesotans, am so sick and tired of the dysfunction in DC,” he told reporters.

While Congress’ timeline is unclear, the impeachment inquiry may well run simultaneously with the Democratic Party’s primary election calendar. The first primary votes are scheduled in early February.

Meanwhile, acting Director of National Intelligence Joseph Maguire is set to speak publicly for the first time about a secret whistleblower complaint involving Mr Trump as House Democrats who have read the document say it is “deeply disturbing.”

Maguire is not expected to reveal many details about the substance of the complaint when he testifies before the House intelligence committee on Thursday morning, but House Democrats who are now mulling Trump’s impeachment are hoping he will explain why he withheld it from Congress for weeks.

The complaint from an intelligence community whistleblower, the document which is at the centre the Trump-Ukraine firestorm, was made available to members of House and Senate intelligence committees on Wednesday after Mr Maguire had initially determined they couldn’t see it.

“Nobody knows how the politics are going to play out, which is why it’s so honourable that Speaker Pelosi is moving forward,” Mr Burton said.

“There comes a tipping point where Congress needs to do its job when there’s such blatant abuse of power.”

Strategists in both parties pointed to the electoral backlash against the Republican Party after House Republicans voted to impeach President Bill Clinton in 1998 for obstructing the investigation into his extramarital affair.

Republicans nearly lost their House majority in the next election.

And Democrats, having won a narrow House majority less than two years ago, must now spend the next 14 months protecting vulnerable freshmen in pro-Trump districts to preserve their grip on at least one chamber of Congress.

Polling on impeachment has never been with the Democrats’ new position.

Multiple polls show that a majority of Americans have consistently opposed impeaching Trump. A Quinnipiac University poll released in mid-July, for example, found that 60% of registered voters opposed impeachment proceedings that could lead to Trump’s removal from office; the opposition included 29% of Democrats and 62% of independents.

The context has changed, however.

Previous polling was generally related to the exhaustive investigation into whether Trump conspired with Russia to influence the 2016 election. This one hinges on Trump’s effort to do the same with Ukraine heading into 2020.

The rough transcript released Wednesday leaves no doubt Mr Trump was asking the Ukrainian president to investigate Mr Biden and Mr Biden’s son, who served on the board of a Ukrainian energy company while his father was vice-president.

And while Democrats were outraged by details of the call, the new facts did little to sway Republican officials.

US president Donald Trump repeatedly prodded Ukraine’s president to look into Democratic rival Joe Biden, according to a rough transcript summarising a call between the two leaders.

Trump has recently confirmed that he ordered the freezing of nearly 400 million dollars in aid to Ukraine a few days before the controversial phone call on July 25 in which he brought up allegations that former vice president Joe Biden may have wanted to interfere with a Ukrainian investigation of his son Hunter.

According to the memo released yesterday, Trump said to Ukrainian president Volodymyr Zelenskiy: “I heard you had a prosecutor who was very good and he was shut down and that’s really unfair.

“A lot of people are talking about that, the way they shut your very good prosecutor down and you had some very bad people involved.”

He continued: “The other thing, there’s a lot of talk about Biden’s son, that Biden stopped the prosecution and a lot of people want to find out about that so whatever you can do with the (US) Attorney General would be great.

“Biden went around bragging that he stopped the prosecution so if you can look into it… It sounds horrible to me.”

“On top of that, I would kindly ask you if you have any additional information you can provide us, it would be very helpful.”

The release of the rough transcript set the parameters of the political debate to come, with Trump dismissing it as routine and Democrats saying it laid the ground for an impeachment inquiry.

Zelinsky has said no one “pushed” him to investigate the Bidens while Trump said there was “no push, no pressure, no nothing”.

The president has insisted he did nothing wrong and has denied that any request for help in procuring damaging information about Biden was tied to the aid freeze to the Ukraine.

The president took the 30-minute call from the White House residence, while officials in the Situation Room listened in and worked to keep a record of the conversation, as is standard practice.

The resulting memorandum was classified as “Secret’ and “ORCON, for “originator controlled”, to prevent its spread throughout the federal government or to American allies.

It was declassified for release on Wednesday.

The release came against the backdrop of the president presiding over a meeting of world leaders at the United Nations.

“Just so you understand, it’s the single greatest witch hunt in American history, probably in history,” Trump said during a meeting with foreign leaders in New York.

Trump also said “there was no pressure whatsoever” when he spoke with Ukraine’s leader about working with his personal lawyer, Rudy Giuliani, and US attorney general William Barr.

According to the call summary, Mr Trump said: “Mr Giuliani is a highly respected man, he was the mayor of New York City, a great mayor, and I would like him to call you.

“I will ask him to call you along with the attorney general.”

Mr Barr has not discussed anything related to Ukraine with Mr Giuliani, officials said.

“No one is above the law”

The complaint has set off a stunning turn of American political events, leading Ms Pelosi to yield to mounting pressure from fellow Democrats on the impeachment inquiry.

Congress’ probe focuses partly on whether Mr Trump abused his presidential powers and sought help from a foreign government to undermine Mr Biden and help his own re-election.

Ms Pelosi said such actions would mark a “betrayal of his oath of office” and declared, “No one is above the law.”