The US president walked to a church near the White House to pose with a bible after police used tear gas to clear peaceful demonstrators. 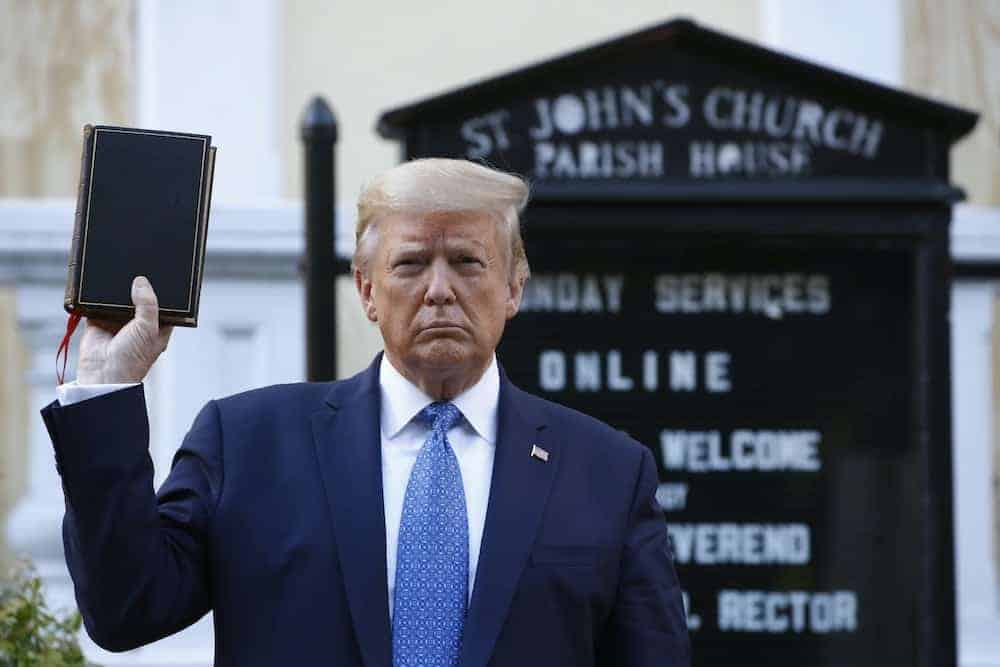 US president Donald Trump has threatened to deploy the military if state governors do not stamp out violent protests over police brutality sparked by the death of George Floyd in Minneapolis.

Mr Trump’s announcement came as police under federal command forced back peaceful demonstrators in Washington DC with tear gas so that he could walk to a nearby church and pose with a bible.

The president’s bellicose rhetoric came as the nation convulsed through another round of violence over the death of Mr Floyd, at a time when the country is already buckling under the coronavirus outbreak and the Depression-level unemployment it has caused.

Mr Trump demanded an end to the heated protests in remarks from the White House Rose Garden and vowed to use more force to achieve that aim.

He said that if governors throughout America do not deploy the National Guard in sufficient numbers to “dominate the streets”, the US military would step in to “quickly solve the problem for them”.

And the US leader declared: “We have the greatest country in the world. We’re going to keep it safe.”

A military deployment by Mr Trump to US states would mark a stunning federal intervention rarely seen in modern American history.

Minutes before Mr Trump began speaking, police and National Guard soldiers began aggressively forcing back hundreds of peaceful protesters who had gathered in Lafayette Park, across the street from the White House, where they were chanting against police brutality and Mr Floyd’s death in Minneapolis.

Mr Floyd died last week after he was pinned to the pavement by a white police officer who put his knee on the handcuffed black man’s neck until he stopped breathing.

His death set off protests that spread from Minneapolis across America. His brother Terrence pleaded with protesters on Monday to remain peaceful.

More than 5,600 people are estimated to have been arrested in the US since the protests began, with violent scenes being witnessed across the country, particularly in New York state.

The scene in and around the White House on Monday night appeared to be carefully orchestrated. As the crowd of protesters grew, US attorney general William Barr arrived in Lafayette Park to look over at the demonstrations and the swarm of law enforcement.

The sudden shift in tactics against the protesters was initially a mystery. Then, after finishing his Rose Garden remarks, Mr Trump emerged from the White House gates and walked through the park to St John’s Church, where an office had been set on fire the previous night.

Mr Trump, who rarely attends church, held up a bible and gathered a group of advisers to pose for photos.

The moment was quickly decried by Mr Trump’s critics, with New York governor Andrew Cuomo saying the president “used the military to push out a peaceful protest so he could have a photo op at a church”.

“It’s all just a reality TV show for this president,” he said on Twitter. “Shameful.”