A 75-year-old man was pushed to the floor by police in Buffalo. 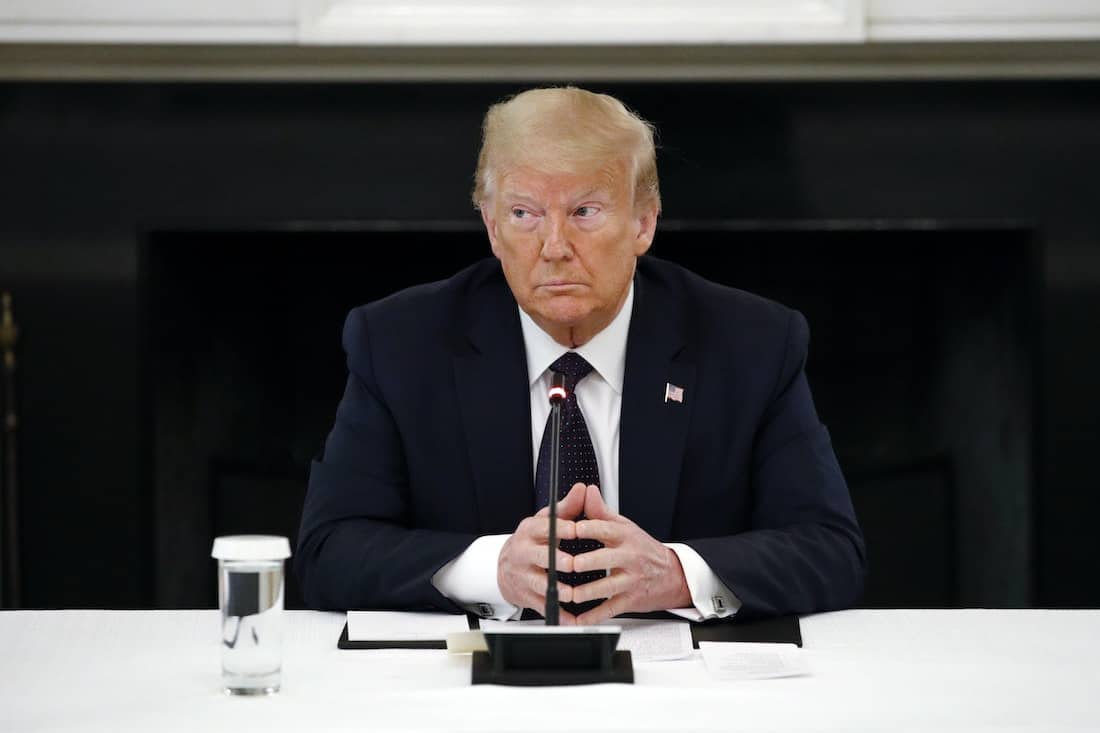 Donald Trump has advanced an unfounded conspiracy theory about a 75-year-old protester in New York state who was pushed over by police, tweeting that the confrontation may have been a “set-up”.

The president, who has called himself “your president of law and order”, again sided firmly with police over protesters who have taken to the streets across the country.

With his tweet, he attempted to cast doubt on video showing police in Buffalo shoving the man, who fell backwards and hit his head on the pavement. He is seen bleeding from his head as officers walk away.

Two Buffalo police officers have been charged with second-degree assault for the incident and could face prison sentences of up to seven years if convicted. They have pleaded not guilty.

The video is one of several that have emerged in recent weeks showing police using seemingly excessive force against protesters demanding justice and racial equality following the killing of George Floyd, a black man who died in police custody in Minneapolis after a white police officer pressed a knee into his neck.

“Buffalo protester shoved by Police could be an ANTIFA provocateur,” Trump wrote.

“75 year old Martin Gugino was pushed away after appearing to scan police communications in order to black out the equipment. @OANN I watched, he fell harder than was pushed. Was aiming scanner. Could be a set up?”

There is no evidence to back Mr Trump’s claim, referencing a report on One America News Network, a far-right news channel that he often praises.

As he has tried to malign violent protesters as “radical-left, bad people” engaging in domestic terrorism, Mr Trump has repeatedly invoked the label “antifa”, an umbrella term for leftist militants bound more by belief than organisational structure.

There have been violent acts, including property destruction and theft, and police officers and protesters have been seriously injured and killed, but federal law enforcement officials have offered little evidence that antifa-aligned protesters could be behind a movement that has appeared nearly simultaneously in hundreds of cities and towns in all 50 states since Mr Floyd’s death.

Mr Gugino, who is out of intensive care but remains in hospital, has been described by friends as a retiree and veteran peace activist driven by his faith and a desire for social justice.

She said he has also been undergoing chemotherapy for cancer.

She said her client “has always been a peaceful protester because he cares about today’s society”.

“No one from law enforcement has even suggested anything otherwise, so we are at a loss to understand why the president of the United States would make such dark, dangerous, and untrue accusations about him. We can confirm that those accusations are utterly baseless and ridiculous,” she said.

“It’s a serious accusation, which should only be made with facts and evidence. And I haven’t seen any yet,” he told reporters.

Asked if the president should not be making such an accusation, Mr Thune said: “Well, I think that’s a given.”

“The President continues to use his platform to peddle conspiracy theories, this time about a peaceful protestor and fellow New Yorker. Not sure how this is supposed to bring our country together,” she tweeted.

Buffalo mayor Byron Brown, another Democrat, tweeted to Mr Trump that “the City of Buffalo is laser focused on healing, taking action against racial injustice and building a good future for our residents. We pray for a full recovery for Mr. Gugino and as I have repeatedly said, the two officers deserve due process”.

He said: “How reckless, how irresponsible, how mean, how crude. I mean if there was ever a reprehensible, dumb comment, and from the president of the United States.

“At this moment of anguish and anger, what does he do? Pour gasoline on the fire. Show some decency. Show some humanity. Show some fairness. You’re the president of the United States.”

As for the substance of the tweet, the president’s claim is “so technically incomprehensible, I’m not even sure where to start”, said Matt Blaze, a professor of computer science and law at Georgetown University.

“Any radio system is subject to interference, but it doesn’t work by pointing some sort of ray gun and interfering,” he said.