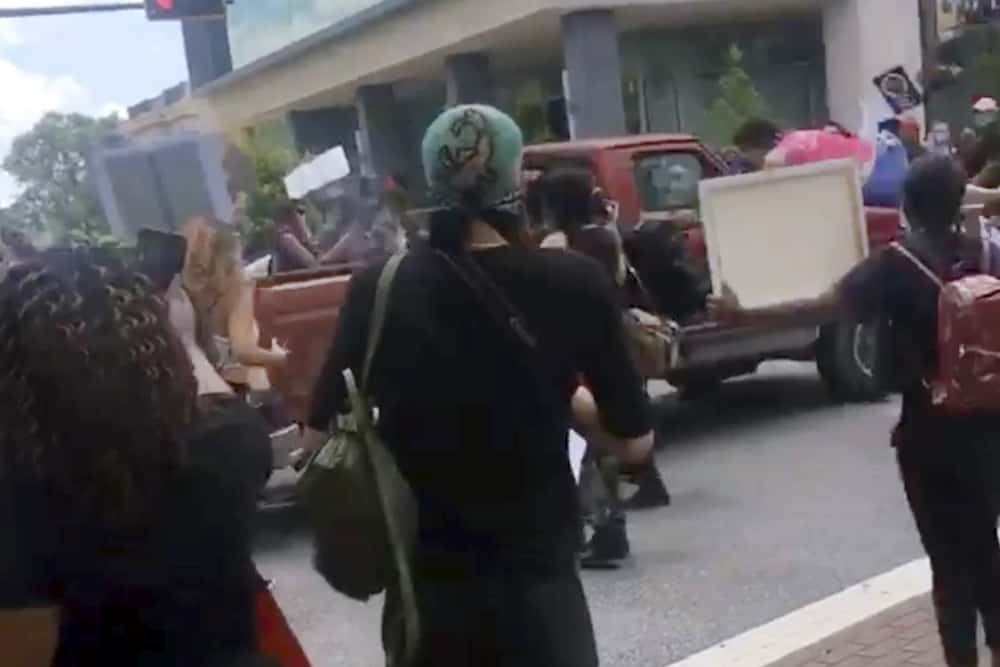 In this image taken from from video provided by @alexisnscott._, a pickup truck drives through a crowd of protesters, Saturday, May 30, 2020, in Tallahassee, Fla Tallahassee police said Saturday that the driver was in custody and that no one was seriously injured. (@alexisnscott._ via AP)

A truck drove through a crowd of protesters during demonstrations in Florida over the death of George Floyd in Minneapolis.

Video shows Tallahassee protesters walking around the truck as it stopped at a traffic light, while some appeared to speak to the driver.

In one video, a bottle was apparently smashed against the widow and the truck then suddenly accelerated, knocking several people to the side, but no serious injuries were reported.

The protest demanding justice for Mr Floyd was one of several in Florida and dozens across the US. Demonstrators outraged over Mr Floyd’s death faced off against heavily armed officers in other states, with some smashing police cars, ransacking businesses and setting fires. One person was killed in Detroit after someone in an car fired shots into a crowd of protesters.

An officer, who is seen on video pressing his knee on Mr Floyd’s neck for several minutes as Mr Floyd begged for air, was charged in Mr Floyd’s death.

Lucas von Hollen, an IT instructor at Florida State University, said participants were chanting, marching and carrying signs when he heard a distinct scream of fear. He looked out a window from a second-floor work building and saw the burgundy vehicle.

He said it slowed down as some protesters moved aside, while others remained in place.

“Then the truck revved its engines … a couple people got out of the way, but some people didn’t, and it just drove straight through the crowd,” he said.

Witnesses said a group followed the truck, forcing it to stop. Tallahassee Police immediately handcuffed the driver, shut down the street and redirected protesters to another area.

Police did not release the name of the driver or say whether he would face any charges, saying details would be forwarded to the state attorney once the investigation was complete.

“This is an extremely tense, emotional time across the nation,” Chief Lawrence Revell said in a statement. “Mutual respect among all of us is vital. The Tallahassee Police Department supports the non-violent gathering of protesters and will uphold their constitutional right to do so while making every effort to maintain a safe environment for our community.”

Mr Von Hollen said police responded swiftly and efficiently in full force, separating the driver and protesters before the situation could escalate, adding he felt “zero sense of danger” after taking to the streets to catch a glimpse.

“Some people were carrying negative signs about the police and the police were helping them out anyway,” he noted. “It was refreshing and a reminder that, yeah it’s pretty bad in other places, but it doesn’t seem to be that bad here.”