"It is impossible to work for a murderer," the director of a state theatre in Russia said as she resigned on Thursday. 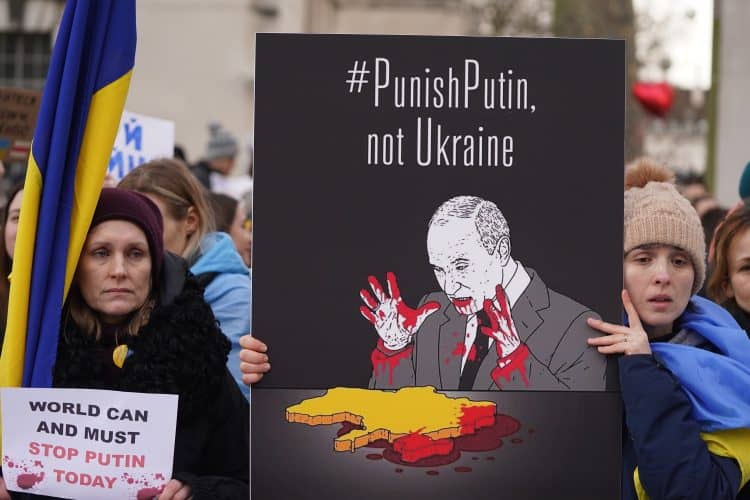 A host of Russian public figures – including celebrities and journalists – have voiced opposition to Vladimir Putin’s invasion of Ukraine, with activists planning to stage an anti-war rally in Moscow.

According to the Moscow Times, an independent English-language publication, pop stars, late-night television hosts and film directors have been posting black squares on Instagram in protest at the war.

“We the Russians will be dealing with the consequences of today for many more years,” wrote Ksenia Sobchak, a socialist and former presidential candidate.

An anti-war petition launched by Elena Chernenko, a business reporter with daily Kommersant, has collected the signatures of at least 100 journalists – including employees of outlets like Novaya Gazeta, Dozhd, Ekho Moskvy, Snob and The Bell.

“The commander-in-chief spins the ‘nuclear button’ in his hands like a keychain from an expensive car. Is the next step a nuclear salvo? I cannot interpret Vladimir Putin’s words about a retaliatory weapon in any other way,” Muratov said.

“Only the anti-war movement of Russians can save life on this planet,” he said in a video message, which announced that the newspaper’s next edition will be published in both Russian and Ukrainian.

‘Impossible to work for a murderer’

Another coalition of 30 independent Russian media outlets has declared opposition to “the massacre started by the Russian leadership”.

“We promise that we will be honest about what is happening while we have this opportunity,” the Syndicate-100 coalition wrote.

“We wish resilience and strength to the people of Ukraine who are resisting aggression and to everyone in Russia who is now trying to resist militaristic madness,” it added.

A number of prominent Russian cultural figures have also spoken out against the war.

“Soviet crimes went unpunished in Russia, and so they recur. The price for what was not done in 1991 are the Russian missiles and bombs killing Ukrainians today,” the author Sergei Lebedev wrote.

“It is too early to ask Ukrainians to forgive us,” he added. “We will ask for forgiveness after the criminals who began this war are punished. If they are punished.”

And Yelena Kovalskaya, director of a state theatre in Russia, announced her resignation on Thursday, saying: “It is impossible to work for a murderer and receive salary from him. I will finish the work I’ve started, but without pay.”

Meanwhile dozens of detentions have been reported in Moscow, St. Petersburg and other Russian cities as citizens stage solo pickets against the conflict.

Related: Farage: ‘I was wrong’ about Putin