The defence ministry said some military units had "accomplished their missions" and were heading home. 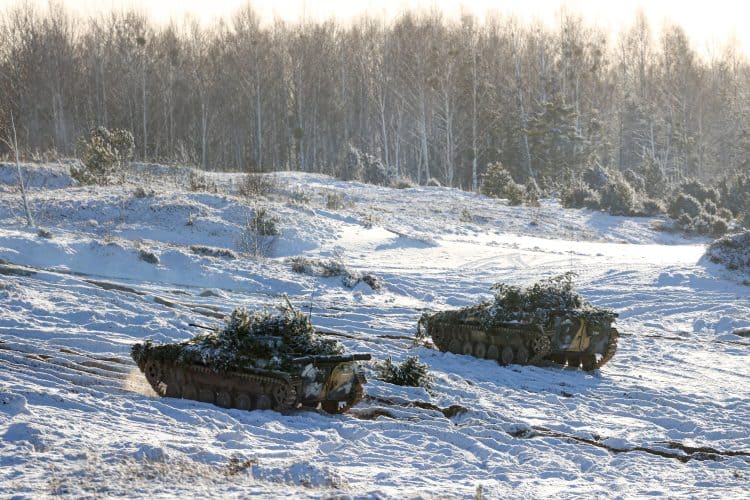 Russia is withdrawing some of its troops from the border with Ukraine, signalling a possible step back from the brink of invasion.

The size of the withdrawal is unclear – and may involve just a fraction of Russia’s forces at the Ukrainian border, which has been estimated as comprising more than 60 per cent of the country’s ground forces.

The surprising announcement came in a statement from defence ministry spokesperson Igor Konashenkov, who described ongoing exercises that involved troops from “practically all military districts, fleets, and the airborne forces”.

“Units of the southern and western military districts, which have accomplished their missions, are boarding trains and trucks and will head for their garrisons later today,” he said in the statement.

According to the Interfax news agency, the ministry also released footage of Russian tanks and other heavy weaponry have been loaded on to railway cars.

The rouble reportedly posted gains following the announcement, hinting at investor hopes that the move will mark the beginning of a deescalation of tensions between Moscow and the West.

It comes as Boris Johnson will chair a meeting of the Cobra emergency committee to consider the latest developments in the Ukraine crisis as hopes rise that diplomacy may still avert war.

The prime minister held talks with Joe Biden on Monday where they agreed a “crucial window for diplomacy” remained open, while Vladimir Putin and his foreign policy chief Sergei Lavrov have also agreed to continue down the path of negotiations.

A Downing Street source said there was “some hope” that diplomacy could work and Russia could step back.

Foreign Secretary Liz Truss stressed the threat of an invasion remained as she confirmed some British embassy staff had moved out of the capital Kyiv to Lviv in western Ukraine, further away from the troops massing on the Russian side of the border.

The US has closed its Kyiv embassy and moved remaining staff to its mission in Lviv, but Truss said the UK would retain a presence in the capital.

“We have moved some staff to Lviv in the west of Ukraine. We still have staff in Kyiv,” she told BBC Radio 4’s Today.

“We continue to review that. But we do think it is very important that we are supporting British citizens in Ukraine and we do have a presence in Kyiv, but, clearly, I’m constantly looking at our staff safety to make sure they are protected.”

She warned that a Russian invasion could reach the capital “very, very quickly” – and suggested a “false flag” operation might be mounted within days so Moscow could claim justification for an attack.

“What we do expect over the next few days is there could be an attempt of a false flag operation to create a pretext to claim the Ukrainians are attacking them, so that the Russians have a justification for invading Ukraine.”